In my last blog post, a friend who has visions of heaven told me he had met C.S. Lewis in the real Narnia, an actual region in the next world. Here is the continuation of his story …

Strangely enough, prior to this vision I had no idea what Lewis looked like. In all my years of reading I had never once seen a picture of him. However, a couple of months after meeting him in Narnia, I happened to pass by a used bookstore. I had never been in this bookstore before, but as I glanced in the window something caught my eye. There, through the dusty, streaked glass, I saw a picture of the man I had met in my vision! I nearly fell over. First I saw the picture, and then I read, in large letters below it, the name C.S. Lewis.

Immediately I went inside and picked up the book, a hefty biography. The picture on the front cover was of Lewis at about age fifty-five, whereas the man in my vision had been younger, in his early thirties. Still, the resemblance was unmistakable, and became even clearer as I leafed through the other photographs in the book and found some of the younger Lewis. This was the very man I had met in Narnia.

Needless to say, I did take Lewis up on his invitation, and I returned to Narnia many times. Who wouldn’t? But alas, most of these experiences I recall now only dimly. I suppose, after all, it isn’t really my world. I don’t think I could be a permanent citizen there, as Lewis seems to be. The one Narnian adventure that I do recall vividly took place in my own living room.

One morning the Lord woke me up very early and took me to a lovely forest glade in Narnia. It was midsummer, just before sunrise, and the woods were filled with a pewtery mist. There was that early-morning sense of the world being created brand new that very moment, as if a veil were being slowly lifted from things to show the paint still wet underneath. Wide awake now, I rose from bed (this is back on earth) and went out to my living room. As I peered through the windows at the landscape around my home, it had that same feel as the woods in Narnia: fresh, newborn, gossamery with mist. I was charmed into a most delicate sense of expectation, as if fairies were about to appear on my lawn. 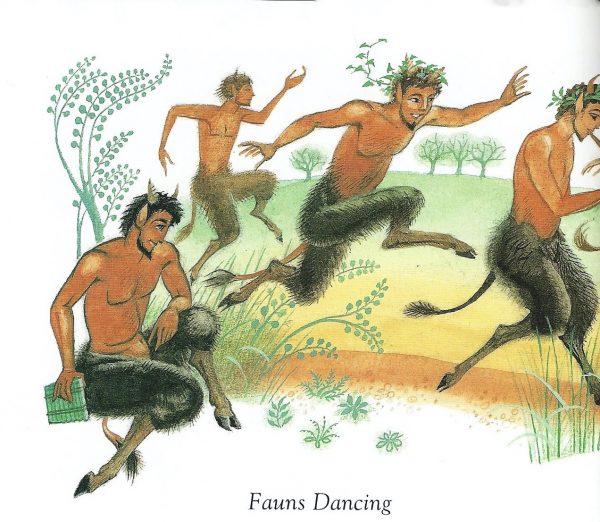 Sure enough, in my vision, a troop of fauns emerged from the Narnian mist and came dancing into the glade. There were maybe a dozen of them, lively, fun-loving little creatures about three or three-and-a-half feet tall––exactly as Lewis describes them. Some played flutes and others had drums and they were dancing their little hearts out. Their music was like the very soul of the morning, so light and fresh and pure, a true hymn to the sunrise. It filled my whole being, until like a feather wafted on a breeze I began to move with the fauns whirling around me. As they took me by the hand and led me in their dance steps, I felt as if I had tiny hooves, tiny pointe slippers on my big feet. The steps were simple, nimble, graceful and wild. And thoroughly, outrageously fun!

For over an hour I danced and danced all around my living room in company with the fauns. We were dancing in the woods in Narnia, but we were also dancing in my living room on earth. I don’t think I’ve ever had such a complete sense of being in the two worlds at once. In my other visions, I normally sit still while all the action takes place in heaven. But in this case I was literally dancing. I had the merriest time and it was immensely liberating. The fauns arrived about five o’clock in the morning, and sometime after six I climbed back into bed beside my wife, to lie there for another hour floating on a cloud of ecstasy. Not a bad way to start the day.

Fauns, incidentally, seem like such pagan creatures, and yet perhaps for that very reason they have power to cut the cords of religiosity. It’s like that with everything in Narnia. I think that’s what it’s all about. Imagination, play, revelry, all the spontaneous adventuring of childhood. I find it so intriguing that Lewis turned to children’s stories in order to capture the deepest truths of heaven.