When Adam and Eve were banished from the Garden, the Lord installed cherubim and a flaming sword to guard the entrance, and He also “made garments of skin for Adam and his wife and clothed them” (Gen 3:21). That these two events coincided is not coincidental. 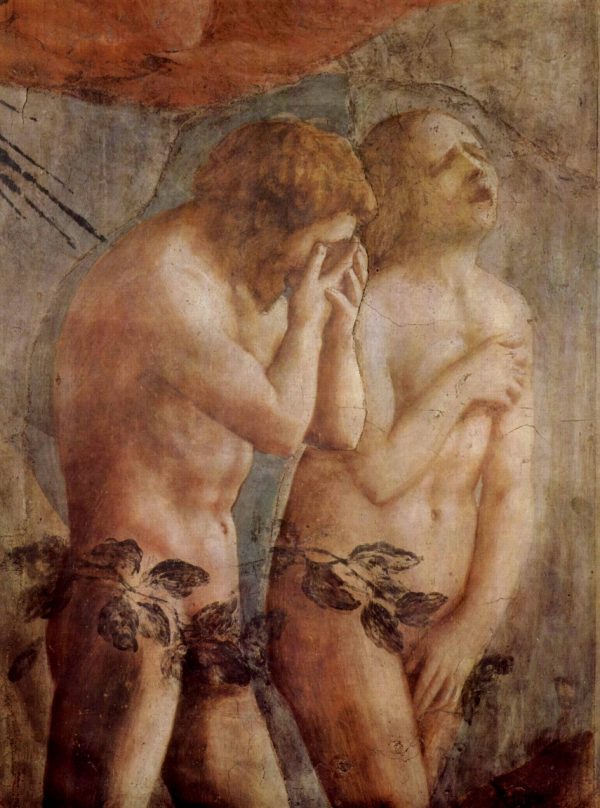 The sword, the cherubim, and the clothing all had essentially the same purpose: to bar the way back to Eden. Nakedness in marriage (and, we might add, in babies or small children) is the one place where it is still possible to witness, without guilt or shame, something of the original light of Eden. Of course the rest of nature—all of it naked—also provides occasional glimpses into Edenic glory, times when we seem to see past the fallen creation into the unfallen, or perhaps even into the New Creation. But the naked human body is more hauntingly revealing than anything else in nature, which is why all of nature may freely go naked except for humanity. Only humans wear clothes because we ourselves must stand with the cherubim at the gate of Eden, wielding the flaming sword, and the only place where that sword may safely be set down is the marriage bed. When this happens, how healing it is! And prophetic: prophetic of the fact that we belong in Paradise and will surely return there.

A foolish question: When God clothed Adam and Eve, why did He not also cover their faces, as some Muslim cultures do with the burqa? For the face is arguably the sexiest part of the body, studded with bumps and curves, orifices and complexities. In fact, God did cover the face, but in a way that is different from the rest of the body. He covered it with a spiritual veil that hides our true glory. Paul teaches that in unbelievers this veil remains, but that it is whisked away when anyone turns to Christ, for believers are those “who with unveiled faces all reflect the Lord’s glory” (2 Cor 3:18).

This veil is further lifted in marriage, a phenomenon symbolized in some wedding ceremonies when the groom raises the bride’s veil to kiss his new wife. You who are married, have a good look at your partner’s face, especially in lovemaking. Is she not now even more beautiful? Younger? More innocent? Is her face not shining? After thirty or fifty years of marriage, are there not times in lovemaking when your partner is transformed back into the same fresh, youthful man or woman to whom you said ‘I do’ on your wedding day? This is the mystical, forever-young miracle of nakedness in marriage, where face and body may be glimpsed as they were in youth, as they were in Eden, or even as they will be in heaven. For our God is not a God of the moribund but of those who even now are being raised to new life.

Images of heaven normally portray the citizens as wearing clothes, and scripture speaks of a “white robe” (Rev 6:11). But what is this “robe of righteousness” (Is 61:10) if it is not the naked human body itself, finally redeemed and revealed in all its glory as the image of God? (The whiteness of the robe, of course, indicating not skin color but radiance.) Naked we came into the world and naked we depart, for clothing is not needed where we are going. Christ on the cross was shamefully nude in order to defeat, not only death, but shame, so that in heaven we may be robed in our own resurrected flesh.

Will there be sex in heaven? No, because our insides will be outside, and nakedness alone will be all the glory we can stand. No titillation in this nakedness, for in itself it will be fully satisfying, the culmination of intimacy: the entire revelation and self-giving of each person to every other. Now, upon greeting, we shake hands. Then, being already as intimate with one another as we can possibly be, we will shake souls.

The above article appears in Marriage: Its Foundation, Theology, and Mission in a Changing World, edited by Curt Hamner & John Trent, etc (2018). Conferences based on this book will soon be held at three major seminaries—Dallas, Denver, and Moody. For anyone who lives near me, I have several copies to give away to the first comers to 166 Anglo St in Bracebridge, Ontario.