(Spoiler Alert! for those who have not read The Blue Umbrella)

Chesterton Cholmondeley poked the bridge of his tortoiseshell glasses with one finger, a gesture he performed a few hundred times a day. Having recovered the years that the evil Dada had stolen from him, Ches was now a lithe, darkly handsome boy of twelve. Yet inside, as if shadowed by a double identity, he still felt old beyond his years. 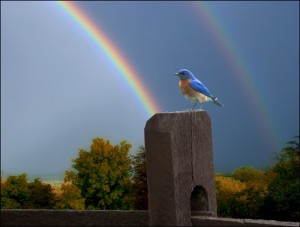 It was a sunny Monday morning in April, a week before Easter, and he sat alone in his room with a heavy bedspread draping the window. A single sunbeam shone through a pinhole in the fabric and hit a glass prism above his desk, splashing a rainbow on the far wall. Interrupting the beam with his hand, Ches admired the array of clear, natural color on his palm. No pigment could give such intense hue; it was pure light.

Leaning forward to write in his notebook, he noticed his reflection in the mirror: the spectrum was now emblazoned across his forehead like warpaint. In the mirror rainbow the violet band of color was for some reason particularly prominent. Was this due to the angle of incidence? he wondered. Or perhaps to some property of the mirror’s silver backing?

Suddenly the rainbow was extinguished, leaving him in darkness. While the cloud passed, he sat listening to the wind outside. All morning it had blown hard and steady, almost as if it was going somewhere. At breakfast his sister Chelsea had remarked, “It’s like the sky is a big balloon with a hole in it and all the air is rushing out.”

When Ches launched into an explanation of high and low pressure zones, Chelsea interrupted, “You know very well that wind comes from bins in Porter’s Store.”

Ches snorted. “Maybe it’s stored there, but that’s not where it comes from.”

“It comes from Eldy,” replied Chelsea. “He delivers it.”

“Okay—but where does he get it?”

Puzzlement darkened Chelsea’s face. Then she brightened. “I’ll ask him!”

Ches sighed. They’d been having this sort of conversation a lot lately and it drove him crazy. In Chelsea’s world, one mystery led to another and there was never any real answer. That’s what science was for: it gave you answers.

Ches’s rainbow returned, and he was just readjusting his prism when there came a knock at the door. He started but did not respond. Even when the knock sounded again more urgently, he kept silent.

Ches hated his full name—not just the preposterous alliteration or how long it took to write, but the fact that Cholmondeley was pronounced Chum-ly, sounding like chummy. Which Ches definitely was not.

“I know you’re in there!” insisted the voice.

Heaving a sigh, Ches drawled, “Enter at your own risk.”

The door opened to admit Zac Sparks, his freckled face looking, as usual, astonished. In the months since Christmas his fiery red hair (which Dada had ordered cut) had grown out into its former puffball.

“What are you doing, Ches, sitting here in the dark on such a nice day?”

Zac strode across the room and was about to flick open the blinds when he realized they were covered with something thick and heavy. As he fumbled around, the thing came down on his head.

“Hey, cut that out!” yelled Ches. “I spent a long time pinning that up.”

“What the . . .” Completely enveloped, Zac struggled to get free.

Ches groaned. It looked as if not one small boy but two or three big ones were thrashing around under the bedspread. Zac was a good kid but highly excitable, like a frisky puppy, always jumping up and licking. After five minutes with him, Ches often felt he wanted to go away and think for a long time.

Finally disentangling himself, Zac spluttered, “What are you trying to do—catch a heffalump?”

“A heffalump. Didn’t you ever read Pooh?”

“You sound like you’re crying!” Zac exploded in laughter. “You know, Winnie-the-Pooh. Didn’t your mother ever read it to you?”

“My mother read me books on science like I asked her to. Why did you go and mess up my bedspread?”

“Because this place feels like a tomb. Here lies Chesterton . . .”

Ches dropped his eyes. For the past four months his father, Reverend Cholmondeley, had lain in the back bedroom in a coma. Ches had not visited him once and rarely referred to him. “So what’s up?” he asked.

“The sky,” said Zac. “And this.” He waved in the air the latest edition of the Big City Times. “Bet you haven’t heard.”

Even from where he stood Ches could read the bold headline:

“So? That stuff happens all the time.”

He pointed to a smaller headline at the bottom of the page:

CRASH DUE TO LOST SECOND?

Ches took the paper and read on:

Scientists are puzzled over the apparent disappearance of a second from the world’s most sophisticated clocks.

According to Dr. Morgan Stromway, director of the National Standards Bureau, “Today, April 9, at midnight, our cesium atomic clocks fell short by precisely one second. Occasionally we add an extra second—called a ‘leap second’—to accomodate for a gradual slowing of the earth’s rotation. But for a second to drop out is unprecedented.”

Dr. Stromway explained that atomic clocks are normally correct to within two nanoseconds per day, or one second in 1,400,000 years. “For a whole second to disappear,” he said, “is equivalent to a city of one-and-a-half million people vanishing from the face of the earth.”

From around the world came reports of other strange events occurring precisely at midnight, including the crash of United Airlines flight 207 . . .

Ches’s reading was interrupted by another knock. “What is this, Grand Central Station?”

Ches grimaced. It was spring break and Sky Porter had announced a special week-long weather school. But lately Ches’s interest in Sky’s weather classes (normally on Saturdays) had declined. Or rather, increasingly his interests had narrowed to a particular field. Ever since seeing a spectacular glory on top of Wind Mountain at Christmas, Ches had been fascinated by what was known as meteorological optics: the study of celestial light displays including glories, rainbows, auroras, and haloes. If he knew the weather class would address one of these topics, Ches was keen; otherwise he’d sooner stay home and work on his optical experiments.

Besides, he found Sky Porter an unsettling person. Frankly, he found people in general unsettling. But since the storekeeper had entered his life, Ches’s world had been changing so fast that he kept looking for ways to put on the brakes. A born scientist, he couldn’t grasp how all weather—wind, rain, earthquakes, light itself—could be controlled by a man across the street with a blue umbrella.

“Think I’ll sit this one out,” he told Chelsea.

“But even Iris is coming.”

Ever since her release from the World’s Smallest Business Establishment, eleven-year-old Iris (the former Barber) had been living with the Cholmondeleys and helping to care for the Reverend. Tom Pethybridge had lived there, too, until his parents were located and he moved to the Big City. Neither Tom nor Iris had shown any interest in learning the secrets of the blue umbrella. As Iris put it, “I’ve had enough magic to last me a lifetime.”

“C’mon, Ches,” said Zac, “you need out of your room too. You and Iris are both cave dwellers.”

Irked at being linked with someone who spent her days changing his father’s diapers, Ches was about to take Zac’s head off when he remembered he had a question for Sky. So, with a sigh, he grabbed his jacket and the three of them headed out.

In the hallway they met Iris, who flashed Ches a big smile.

“Thought you weren’t interested in this stuff,” he muttered.

“The umbrella’s too fun just to watch,” said Chelsea. “At least try making thunder or something.”

Outside it was so windy they had to lean forward as though plodding uphill. It was a cold wind for April and Ches clutched at his collar. Crossing the street to Porter’s Store, Zac asked him what he thought of the newspaper article.

“It goes somewhere,” said Zac. “I wonder where?”

Zac kept chattering but Ches tuned him out, listening instead to Chelsea. Much as he hated to admit it, after his sister’s five years of total silence he loved the sound of her musical voice.

“Sky told me a story and I painted it,” she was saying. “Wait till you see.”

Ascending to the Weatherworks by the back stairs, the children found Sky surrounded by large, white, crystalline panels mounted on easels. Blue umbrella in hand, he stood before the sparkling canvasses like an artist with a brush.

Ches stared, surprised to find himself genuinely intrigued. Just when he thought he’d seen everything, Sky came up with something new. The panels were a good eight feet high by about four wide.

“I did these other panels this morning,” she continued. Pointing out different features, she bounced on her heels. “Way up there, that’s mountains, snow-covered, with caves and everything. And sailing around the peaks are white eagles. Down here, in the valleys, it’s summer with all kinds of trees and flowers. And this is a castle and over here is a column of knights on horseback with banners fluttering . . .”

“You guys have some imagination.”

Iris said, “I always thought this was done by Jack Frost.”

Chelsea performed an elaborate bow, including the doffing of an imaginary plumed hat. “Jill Frost, at your service. Do you want to try your hand, Iris?”

“May I show her, Sky?” Eagerly Chelsea took the umbrella and began to draw on a blank, transparent ice panel. Wherever the umbrella’s tip touched, little puffs of vapor appeared, leaving a frosted impression accompanied by a tintinnabulous sound like snowflakes falling on tinfoil. An image of Eldy’s Balloon and Flower Stand began to emerge, complete with the figure of Eldy, bent double as he arranged a bouquet. At a certain point, before their eyes, the picture seemed to come to life. Even Ches noticed it.

“Sometimes,” observed Sky, “art is a matter of discovering the right medium.”

Unsettled by the vividness of the image, Ches backed away. Glancing at his watch, he saw that it was just coming up to noon.

“Let Iris try,” said Chelsea, offering her the umbrella. “Do you want to?”

“Then at least let me show you the inside. May I, Sky?”

Chelsea undid the umbrella’s fastener and slid the golden ring up the shaft. The spreaders opened to the familiar sound of the cloth canopy rustling like wings.

Just then the whole building shook with the pounding of the wind.

But Chelsea was already lifting the umbrella aloft like a sail. “Look, Iris, the inside is exactly the same as the sky itself!”

Again the wind thumped the building, so hard that Ches felt it in his chest. Then he heard a loud rip as of canvas tearing. And what happened next tore at his heart.

He was looking right at his sister when she lifted off like a rocket and disappeared into the umbrella’s canopy.

The umbrella clattered to the floor.