For all of my readers who couldn’t be at the book launch of my new fantasy novel The Blue Umbrella, I want to give you a taste of my remarks that evening to a packed crowd in the real Porter’s Store (featured in the novel) in Langley, British Columbia:

Good evening, everyone. Thank you all for coming out. 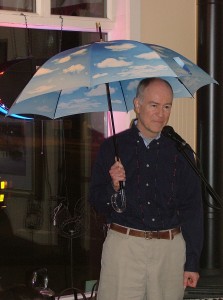 This is a great occasion for me, because it’s the launch not only of a new book but of a new career. When I first began to dream of being a writer at the age of eleven, I assumed I would write novels. Fiction, I thought, was where it was at. Now I am 57, and while The Blue Umbrella is my tenth book, it’s my first novel. Why it took me so long to grow up is a long story, but tonight I’m just happy finally to be a novelist.

I think that’s something to celebrate. And how better to celebrate than by opening an umbrella indoors? You thought this was a book launch, but really it’s a Grand Opening! I hope none of you are superstitious. While I was writing this book, many times I opened my umbrella indoors, and as far as I know it caused me no harm. So here goes.

Gandalf has his staff.
Harry Potter has his wand.
Luke Skywalker has his light saber.
And Sky Porter has his blue umbrella!

At this point, to a round of applause, I opened my spring-loaded, blue-sky-with-fluffy-clouds umbrella. 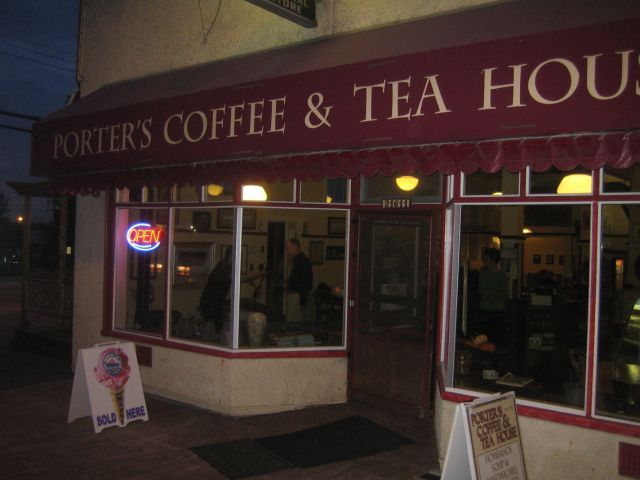 And now for another Grand Opening …

Here I opened the book itself and read from Chapter One, followed by several other readings interspersed with comments. I think my favorite was the beginning of Chapter 8 which describes Zac’s first visit to Porter’s Store. It was so fun to be reading this passage aloud in the very building that had inspired it!

Rather than trying to reproduce my other comments, what follows is a conflation of two interviews I’ve done, one with a blogger and the other with a university newspaper:

What memorable events have you enjoyed with the release of The Blue Umbrella? Can you share a favorite moment with a fan? A memory of holding the finished volume in your hand? What stands out most about this fiction debut?

The best part was my book launch at the real Porter’s Store, just three blocks from where I live. It was one of the most wonderful events of my life. Not since my wedding day (27 years ago!) had so many people that I know gathered in one room. And it was a great community event. Before this, as a writer of non-fiction, none of my other books was really rooted in a particular place. But with this one I love the feeling of the neighborhood connection. One neighbor played jazz piano, the store managers were as excited as I was, and the owner even baked cookies in the shape of blue umbrellas! As for a favorite moment with a fan, I think it was the little boy who asked, “Are you famous?” I suppose I should have said something about there being degrees of fame (“I’m not as famous as Hannah Montana!”), but instead I just beamed and said, “Right now it sure feels like it.”

The Blue Umbrella is your first journey into fiction. What drew you to the children’s fiction genre? Were you surprised by Zac Sparks’ adventure as it flowed from your mind to the page?

About ten years ago I started reading children’s fiction for the first time as an adult, and I’m still at it. I find it so refreshing. Children’s literature is allowed to be idealistic in a way that modern adult literature is not. There are happy endings, heroic characters, a clear battle between good and evil, and portals leading to other worlds—all things that reflect, I believe, the deepest truths of life. Writing one of these stories for myself has been an amazing experience. I was at a point in my writing life where I needed a new challenge, and I definitely got it! With the change to a new genre, suddenly I was in the midst of a very steep learning curve, and I often felt terrified. What was going to happen next? Could I really do this? How would it end? So yes, I was very surprised at how the story took on a life of its own and tumbled, or sometimes stumbled, forward. Eventually I learned to relax and just trust the process. Which is very interesting, considering that my story is fundamentally about learning to trust.

Can you say more about that?

The book begins with a lively ten-year-old boy named Zac Sparks whose life suddenly changes. His mother is killed by lightning and he’s sent away to live with two cruel old aunts in a town called Five Corners that is full of dark mysteries. In this grim situation, Zac must determine where the light is shining and who he can trust. So it’s really a story about learning to trust in the midst of despair.

What made you want to write about an orphan?

We are all essentially alone in the world. Children, I think, at a certain point in growing up, feel this acutely. Certainly others can help us, but when it comes to facing difficult problems, ultimately we must go it alone, finding our own answers, our own courage. This puts us squarely in the place where, possibly, we can have a transcendent experience.

What is the significance of the blue umbrella?

The blue umbrella is what Alfred Hitchcock called a McGuffin. In a movie or novel the McGuffin is the physical object around which all the action centers. In The Lord of the Rings, for example, it’s the ring. In my book it’s the blue umbrella that belongs to Sky Porter. Why does he always carry it? What does it do? Why does Dada want it so badly? The blue umbrella is shrouded in mystery—a mystery so wonderful that I wish I could tell you all about it. I think it’s worth reading the book just to find out.

Weather is a significant theme in the book. What is your favorite kind of weather and why?

I’m not a sunny day sort of person. Like Zac’s mother in my book, I love weather with character, especially thunder and lightning and wind. This goes back to my childhood when, like Zac, I used to stay up with my mother late at night to watch storms. As it happens, the place where I live now (on the west coast) doesn’t have much electrical activity, but we do get a lot of rain. There’s nothing I like better than an all-day rain. It’s great writing weather!

You have a daughter. What weather events have you enjoyed together?

When Heather was about ten we had a holiday at a lakeside cottage. It rained solidly for several days, until we were sick of it. On Sunday we decided to have a little family church service. We read scripture, sang, and talked to God and about Him. Then at the end, moved by the Spirit, we did a sun dance! You’ve heard of rain dances? Well, this was a sun dance, to make the rain stop and bring out the sun. After all, it was Sunday! So we danced around the cottage and whooped it up and had ourselves a ball. And an hour later the sun came out and it stayed sunny the rest of our holiday.

What has been your most memorable weather event?

I’ve known some extreme weather, especially the tremendous blizzards when I lived on the prairies. There have been times when I didn’t know if I’d come out alive. But my most memorable weather event was actually very peaceful and beautiful. Again I was at a cottage with my family, only this time I was the ten-year-old child. I was on a hike with my parents and we got caught in a downpour. We found refuge in the woods, where my dad built a fire, and for the next few hours we sat around that campfire and had the most beautiful family time, with the sound of the rain all around us. I still have the wooden spoon that my dad carved for me with his jackknife that day. My father was a very busy man and I didn’t get much time with him. But that day I had him and my mom all to myself and I felt so happy and protected.

You stated in the After Words section of the book that the spiritual allegory was not intentional. However, the final scenes seem to reflect a deep sense of the gospel message (e.g. the color of Sky Porter’s second umbrella will be seen by many as representative of the blood of Christ). Were you pleased that the story so effortlessly represents your faith? Do you hope that others will sense your message as they read?

“The story effortlessly represents my faith”: Yes, this is exactly what happened. The red umbrella is a good example of a symbol that presented itself entirely naturally. Of course I could have made that umbrella some other color. But if the story itself wants to go to Connecticut, and I see a signpost that says “Connecticut,” then I’ll take that road. Writing is a matter of following, not forcing. I was deeply pleased to find myself writing a story with such spiritual significance, and I do hope readers will notice this and talk about it. But I’m also pleased that the book can, I think, be enjoyed without one being fully aware of this other dimension. If the story works well in its own right, then its spiritual truth can still be felt as a resonance, a perfume, that lingers in a reader’s heart. This is what C.S. Lewis meant by “baptizing the imagination,” and it’s what I experienced when his book The Lion, the Witch, and the Wardrobe was first read to me as a child. I had no idea of its Christian significance, but the story stayed with me powerfully.

What exciting things is God doing in your life? Any closing words of encouragement you’d like to share with your readers?

Finding the courage to identify myself as a fiction writer, committing to writing a long novel, and struggling through every difficulty to finally give it birth, has brought me to a mountaintop experience. I’ve never been happier or felt more free in my life, and I find myself with the closeness to God that I’ve always dreamed of. What happened is that I didn’t just write a novel, but I went on an epic journey myself. Although my book is a fantasy, in order to write it I, too, in my real life, had to face down villains, slay dragons, slog through darkness, and eventually emerge into the light. As I look around myself now, I see the battlefield strewn with the corpses of my enemies, and I am a new person. So I would challenge my readers to embark on a similar journey. It may not be writing a novel, but what is it for you? What is God stirring in your heart? Take hold of that dream and pursue it with all you’ve got, and don’t stop until you’ve achieved it.