On August 7, 2014, Karen and I celebrated our 32nd wedding anniversary. I posted a photo of us to Facebook, along with these words:

Q: Can a monk and a missionary find happiness together?

Happy 32nd Anniversary to us!

This one post, incidentally, ended up reaching more people and garnering more likes than all my other posts put together. 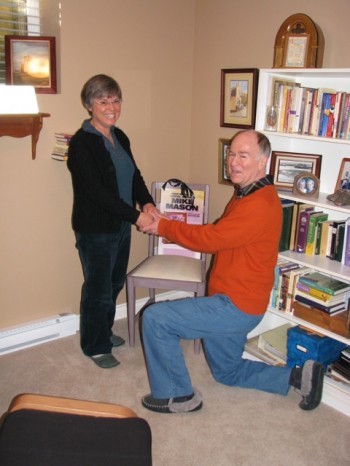 This wasn’t too hard to accomplish, since I’d launched my FB page just three weeks before. Still, it gave me a good lesson in the Facebook ethos. All my other posts had been deep, wise reflections on faith and spirituality. Apparently that’s not what the FB crowd wants. But feed them one juicy morsel of personal information and they’re all over it like ants at a picnic.

Q: How did this change my FB strategy?

A: It didn’t. I went right back to deep and wise, since that, frankly, is who I am.

But this is not what I wish to talk about here. What’s really on my mind (being the deep, wise person I am) is the Greek word, or phrase, hapax legomenon. Literally it means “(something) said (only) once,” and it refers to a word that occurs but once in a literary context—either in the whole body of an author’s work, or in a given book. For example, Melville’s Moby-Dick, despite the whiteness of the whale and Ahab’s ultimate union with it, contains the word matrimonial only once. And in all of Shakespeare’s works, oddly enough, we find just one occurrence of the word satyr. That virtuoso of the English language, Charles Dickens, used the word sassigassity (meaning something like audacity) only once, in his short story “A Christmas Tree.” Indeed this is the sole occurrence of this estimable word in the entire English language—unless we count the flood of ensuing comments upon it. Which makes sassigassity, more properly, not a hapax legomenon but a nonce word—that is, a word invented by an author “for the nonce.” Shakespeare launched quite a battery of nonce words, such as anthropophaginian, meaning cannibal, or wappened, meaning sexually exhausted through promiscuity. At least, we assume these are nonce words, rather than true hapax, since they occur nowhere else.

In an online article on this subject, Ben Zimmer, an editor at Oxford University Press, notes that “nowadays it’s much harder to find a uniquely occurring example of a word, since we have enormous online corpora at our fingertips thanks to Google and other search engines. And of course, as soon as you find an online hapax, it’s no longer a hapax as soon as you discuss it online!” Mr. Zimmer’s article ends very nicely with, “We all have the power of Shakespeare to hapaxify to our heart’s content. And yes, I just invented hapaxify.” But Mr. Z, shouldn’t what you have just done be properly termed noncify? And yes, I just invented noncify. As of today (Jan 7, 2015), with the exception of one unintelligible listing, the only place you’ll find this word on the entire world wide web is in this blog post.

The term hapax legomenon first came into use in Biblical studies, where such words pose a translation problem because the meanings of ancient words are usually determined by comparison of different contexts in which the word appears. The Greek New Testament contains 686 hapax legomena. About 25 of these are unique occurrences, not only in the New Testament but in the entire body of Greek literature, which makes their meanings particularly difficult to determine. Perhaps the most famous example is in the Lord’s Prayer, in the phrase, “Give us this day our daily bread.” The word translated daily—epiousios—appears nowhere else in Greek literature and so its precise meaning is unknown. While scholars can infer its meaning, your guess may be as good as theirs.

But I digress. What I really set out discuss is the phenomenon of hapax legomena in my own body of work. When I found myself typing the phrase AND HOW! in that Facebook post about our 32nd anniversary, it brought me up short. Where did that come from, I wondered? I couldn’t recall ever using this phrase before, either in my writing or my conversation. It struck me as so peculiar that I actually had to look it up to see if it really meant what I thought it did. It seemed precisely right for what I wanted to convey, and hitting upon it—finding it flowing spontaneously from my fingers—gave me an exquisite frisson of pleasure.

Upon reflection, I realize that I’ve been aware of this phenomenon for some time in my writing. I’ll be typing along when suddenly a word appears on my screen that I feel certain I’ve never used before. Recent examples include rebarbative, psittacism, logomachy, comminatory. How would I even know the meanings of such words? Yes, I have to look them up to make sure, but I’m almost always right. Thus is proven the value of reading for an author, as through books we continue to learn the tools of our trade—words—in the same way we did as young children: subconsciously.

And it’s not only sesquipedalian words that I find myself using for the first time. The big surprise is that a good portion of my hapax are pretty common fare: rife, decorous, allay, redound, discomfit. What an amazing language we have, that even a word expert (as I ought to be) can continue expanding his vocabulary not only with ten-dollar words but with fifty-cent ones.

Every time I happen upon a hapax I get that frisson of delight. It makes me feel that my writing is alive, organic, and that I’m tapping into (or typing into) something bigger than myself. I was hoping a hapax might pop out in the course of writing this blog—but no such luck. Unless we count my nonce word noncify.

Or how about this, which just occurs to me: Change ‘c’ to ‘s’ in noncify and add a syllable, and you get nonsensify, a word that means to change something sensible into nonsense. It’s not listed in my big Webster’s, but sure enough, it’s in Wiktionary.

And here’s another: My new book of Christmas stories was published last fall. Since it’s titled Twenty-One Candles,  a friend recently called me a “candlemaker.” He meant, of course, a chandler—a word which I, for one, have never used before this moment.