Recently I published a Foreword to a new novel by Greg McKitrick, A Walk in the Thai Sun. This book is a detective novel with a twist. Every detective novel has twists, but this one twists toward an exploration of Christian faith as it unfolds in the unbelieving heart of the protagonist, a retired police detective whose missionary son has been murdered. Have a look at the book trailer, and here’s my Foreword: 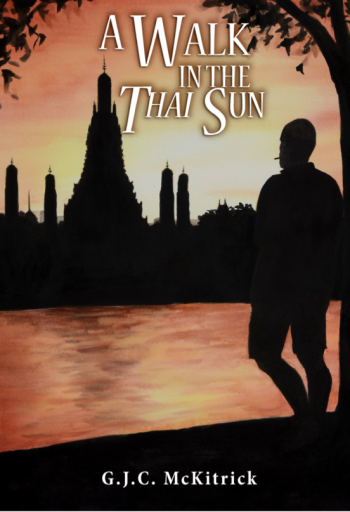 All murder mysteries are essentially spiritual in nature, focussing on the quest for truth and justice. The protagonist sets out to discover and expose the facts of what happened and to bring wrong-doers to justice, and in this he acts as an accomplice of God. In most mystery tales the religious aspect of this mission is hidden, but in A Walk in the Thai Sun it spills onto the surface—like escaping blood—even as it is handled with utmost delicacy.

But this novel is no ordinary murder mystery. It resembles that genre; in many ways it walks and talks like a murder mystery. But as the reader will soon discover, it does not fit that mold. To be sure, there’s murder here, and mystery, and a cop/detective protagonist, along with plot momentum enough to keep the pages turning. However, all these elements are skewed in a way that makes for a more intensely personal work of art.

Take the page-turning. While the plot is certainly compelling, what pulls us even more is the setting, which is so minutely and masterfully observed as constantly to rivet the reader’s attention.

Or consider the angle of mystery. In this book the big question is not the identity of the killer but how the living characters relate to the one killed. This is a story about the mystery of relationships: father and son, father and daughter, man and woman, friendships, cross-cultural relations, and ultimately the approach of humans to the divine, and vice versa.

At the climax of A Walk in the Thai Sun, a nexus of apparent coincidences prompts one character to reflect, “Kind of makes you want to believe in God, doesn’t it?” to which another responds, “Sure, if your idea of God is a second-rate novelist.”

Thankfully, the writer of these lines is no second-rater. A comparison with Graham Greene comes to mind—for the clarity of the prose, the exotic locale, the noir ambience, the dead-center dialogue, the complexity of characterization, and most of all for the subtle spiritual dimension of this writing, which is less a dimension than a pervasive atmosphere. The deepest mystery here concerns the one character who is both most consequential and most invisible. The identity of this hidden protagonist I leave to the reader to explore.

I first encountered this wonderful novel in serial form. I was in a writers’ group with Greg McKitrick during the time he was composing it, and once a month, after a scrumptious dessert and some great conversation, we would listen, rapt, as the latest installment of the new work unfolded. I was enthralled then, and I remain enthralled after several readings. When Greg asked me to write a foreword, I thought I’d just quickly skim the novel to refresh my mind. But after one page I knew I was hooked again, and I treated myself to re-reading every word.

This is the mark of first-rate literature: that successive readings yield greater depth and increasing pleasure. I envy those who are about to embark on this journey for the first time.

Posted in Blog, Reviews and Interviews and tagged Book Review.