On February 3, 2012, I celebrated my 60th birthday. The day itself I spent quietly, but the next day I had a party. My friend Andrew Case, accompanied by Kristina Hutchison, played a living room concert, so the evening was filled with music, good friends, and a fabulous chocolate cake courtesy of Karen. 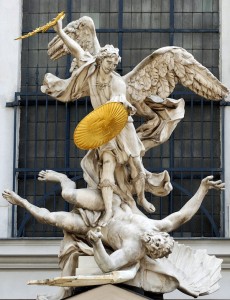 I gave myself a special birthday present—I mean, besides the Bose noise-cancelling headphones that are fantastic! I also gave myself something entirely immaterial but much more important. Well, I didn’t actually give it, because it had already been given to me. But I reclaimed it.

I reclaimed my given name: Michael. For as long as I can remember I’ve been called Mike, though I have no idea who started that or why. I always accepted the short form, took it for granted, until a few years ago when I began to feel a wistful longing to return to my true name. After all, Michael is a wonderful name—good, solid, biblical. I really think it’s my favorite name of all, and I especially love what it means. It’s Hebrew for Who is like God? In youthful naiveté I used to interpret that phrase as meaning godlike. But no, there’s a question mark at the end. It’s a rhetorical question expressed numerous times in the Bible, as in Exodus 15:11: “Who among the gods is like You, Lord?”

It’s those two little letters at the end of Michael that stand for God, or Elohim—the very letters that the short form of my name omits. Not a good idea to leave God out of the picture! The archangel Michael feels the same way. I wouldn’t try calling him Mike.

The only problem is that all of my books have appeared under the name of Mike, and there’s no way to alter this. It’s what kept me from making the change long ago. But if a person can’t do what he wants at age 60, when can he?

So Michael it became, from then on. I sent out a notice to all of my friends and began the process of re-training them. As for my books, I solved that problem by keeping Mike as my pen name. But in my personal life, to all those close to me, I became Michael.

At least, that was the theory. Nearly three years later, however, I had to admit that the revolution had failed. Most people who’d known me for any length of time (including my wife!) simply refused to change. Moreover, since of lot of my communication is with people who know me by the name on my books, I ended up with a kind of split identity: I was Mike to one person, Michael to another, and whenever I wrote an email, made a phone call, etc., I had to think carefully about who I was to this person. About who I am, period. A ridiculous predicament!

Finally, therefore, I gave it up as a lost cause and went back to just plain Mike. Maybe it suits me better, I don’t know. Having said that, if you choose to call me Michael, I’ll be happy. There is, indeed, no one like God, and having been made in His image, I know there’s no one like me, either.