In November of 2016 Bob Dylan was awarded the Nobel Prize for Literature. 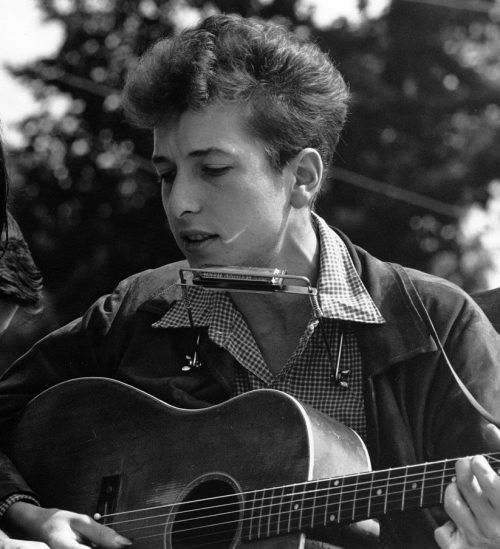 As Dylan was unable to attend the ceremony on December 10 in Stockholm, his friend Patti Smith honored him with a performance of his classic song “A Hard Rain’s A-Gonna Fall.” A veteran musician herself, she was not accustomed to feeling stage fright. But given the weightiness of the occasion, the presence of the King and Queen of Sweden, an audience of some of the best minds in the world, and the gravity of lyrics that are among the most portentous lines ever written, she was overcome. Although she knew the words well, at the second verse she stumbled and, for a few moments, could not continue. “I’m sorry,” she said, “I’m so nervous.”

The place in the song where Patti Smith broke down was Line 3 of Stanza 2, which reads: “I saw a newborn baby with wild wolves all around it.” The stanza continues:

The reference to Christ in these lines is patent. All too quickly, the “newborn baby” falls into the clutches of “wild wolves” and “men with hammers a-bleedin’.” From Christmas to Good Friday in a few words, and then the refrain:

How interesting: Two weeks before Christmas, with all the world watching, Patti Smith falters on the one line in this song that speaks of the birth of Christ, and that goes on to describe His violent, sacrificial death. By faltering, the singer draws special attention to these events. Naturally she experienced her lapse as a failure, but God shone through her weakness to glorify His Son. Indeed, as Smith herself later testified, “As I took my seat, I felt the humiliating sting of failure, but also the strange realization that I had somehow entered and truly lived the world of the lyrics.”

That morning in Stockholm, she had awoken with some anxiety. It was pouring rain and continued to rain heavily. What is this “hard rain” that she would sing about, that Dylan had prophesied would fall? Weeping, certainly. Also floods, hail, natural disasters. Last year on the Canadian prairies many farmers saw their best crop in years wiped out in fifteen minutes of hail. The hard rain is devastating, heartbreaking, overwhelming, and in each of our lives, and regularly in world history, the hard rain’s a-gonna fall. And finally it will fall with such earthshattering, apocalyptic force that the world will end.

This is an early Dylan song, written and recorded in 1962. Despite the Christian symbolism, it wasn’t until sixteen years later, in November 1978, that Bob Dylan met Christ. The following year he released an album of entirely Christian songs entitled “Slow Train Coming,” the title track of which is strongly reminiscent of the earlier “Hard Rain,” for “There’s a slow, slow train coming up around the bend.”

Dylan’s encounter with the Lord happened in a hotel room in Tucson, Arizona. He was having a difficult time on tour. He knew he needed something—“something that I didn’t have before.” At his previous performance, in San Diego, someone had tossed a silver cross onto the stage. That night in Tucson, he said later, “I looked in my pocket and I had this cross,” and at that point he experienced a vision of Christ: “Jesus did appear to me as King of Kings and Lord of Lords. There was a presence in the room that couldn’t have been anybody but Jesus … Jesus put his hand on me. It was a physical thing. I felt it. I felt it all over me. I felt my whole body tremble. The glory of the Lord knocked me down and picked me up.” (1)

From over half a century of Dylan songs, why did Patti Smith choose “A Hard Rain’s A-Gonna Fall” to perform at the Nobel ceremony? Simply because it was a favorite, she said, one she’d loved since she was a teenager. But more than that, I believe, it’s one that proclaims Dylan’s central mission, his vocation, with peculiar clarity and power. Listen to the final stanza:

Dylan’s calling, which he has faithfully fulfilled, was to make songs that often go into the heart of the hardest, darkest places, never shrinking from suffering and evil, and so to tell the world the truth about itself. This was also the mission of Jesus. It’s the reason for Good Friday. And it should be the mission of every Christian. As we reach into our pockets and take up the silver cross of Christ, a hard rain’s a-gonna fall. It’s going to fall anyway, and the way to face it is with honesty, humility, courage, and faith, not being afraid of our own failings but letting Christ shine through them.

The morning following the Stockholm ceremony, in the breakfast room of the hotel, Patti Smith was greeted by many of the Nobel laureates. Later she wrote: “They told me I did a good job. I wish I would have done better, I said. No, no, they replied, none of us wish that. For us, your performance seemed a metaphor for our own struggles.”

It’s been said that we connect with others more through our weaknesses than our strengths. On Good Friday, God connected with the world through His “darling young one,” who went “where souls are forgotten, where black is the color.” The hard rain fell on Him. He took it, and He poured out the red, refreshing rain from His own heart.

Next Post:  Reach for the Stars: An Easter Story