As the war in Ukraine grinds on from one horror to another, I think we must seriously question whether someone like Vladimir Putin is a human being, or whether he has abrogated his humanity. Colloquially we may call such people ‘monsters,’ but might not this assessment in fact be the truth?

In scripture there is clearly a line that may be crossed, beyond which salvation is no longer possible. While Mr. Putin professes Christian faith, what sort of Christian—what sort of human—instigates crimes against humanity? As the book of Hebrews warns, “If we deliberately keep on sinning after we have received the knowledge of the truth, no sacrifice for sins is left, but only a fearful expectation of judgment and of raging fire that will consume the enemies of God” (10:26-27). And the Apostle Jude speaks of those false believers who are “wandering stars, for whom blackest darkness has been reserved forever” (v. 13). 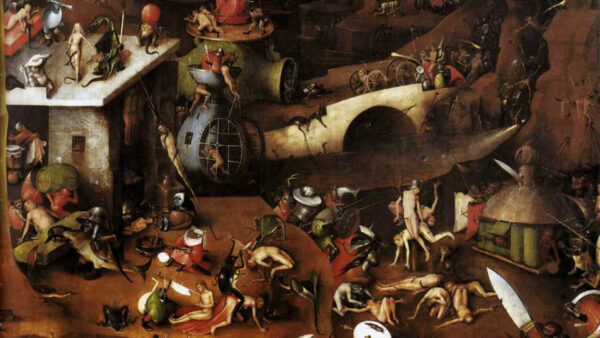 A section of Hieronymous Bosch’s “The Last Judgment,” his vision of Hell.

Such reprobates may have transgressed so heinously as to annul their human soul. They have taken a road from which there is no return, the road to hell. In this view, hell is not populated by lost human beings but by monsters. As a Christian I know that I am “a new creation” (2 Cor 5:17) and that “I live no longer but Christ lives in me” (Gal 2:20). Yet what sort of being is someone in whom the evil one lives?

But wait: Doesn’t scripture tell us not to judge? Who am I to say that Putin is no longer human and is going to hell? However, is it not also wrong to excuse and protect the evil by shrinking from denouncing them, and soft-pedaling the reality of hell?

Perhaps it is important to distinguish between judging and discerning. To discern the truth about a man like Putin is no more than what the Apostles did in excoriating false believers, or what Jesus Himself said about Judas. Speaking of His disciples the Lord said, “None has been lost except the one doomed to destruction” (Jn 17:12), or in other translations, “the son of perdition.” Jesus was the Son of Man, but Judas was the son of perdition, destined for hell.

Why may we not say the same of Putin or Hitler? In Lithuania a tall office building displays a large banner which reads, “Putin, The Hague is waiting for you.” Yes, but so is another place beginning with ‘H.’ We do not hesitate to ‘judge’ our fellow Christians as those who are destined for heaven. Why all this pussyfooting around about the other place?

These days we find the concept of hell awkward, distasteful, unthinkable. How could a loving God condemn people to eternal fire? However, what if the denizens of hell are not people? If these thoroughly godless and evil ‘people,’ these supposedly fellow human beings, were suddenly revealed to us as the monsters they are—and who in any case we suspect, even know, them to be—wouldn’t we too condemn them to hell? In the words of C.S. Lewis, such a person may in truth be “a horror and a corruption such as you now meet, if at all, only in a nightmare.”

Perhaps our judgment on such matters must stop short of being conclusive. Certainly we are called to love our enemies and to pray for those who are evil, just as the sun shines equally on them as on us. But true love and effective prayer also depend on clear discernment. What is the condition of those souls we are loving and praying for? If a soul may be irredeemably lost, how might that affect our prayers?

Last week I wrote about the profound struggle Jesus must have endured in contemplating the choice of Judas as one of the twelve, knowing full well he was a son of perdition. Perhaps the lesson for us is that having clear discernment about the enemies of God may not exonerate us from being in relationship with them.

Yes, discernment into the state of others’ souls is a thorny issue, but we have the Holy Spirit, the very mind of Christ, to guide us. Jude offers some good advice on this subject: “Be merciful to those who doubt; save others by snatching them from the fire; to others show mercy, mixed with fear—hating even the clothing stained by corrupted flesh” (vv 22-3).