I’m sitting at my window, looking out at the sky, the trees, the flowers, the river, the waterfall.

Sometimes I think, “If God had made nothing else but this tree, its myriad leaves ballet-dancing in the breeze, He would still be worth praising forever and ever.”

Or I think, “If God had made nothing else but this flower, garbed in its delicate pink lingerie, it would still entirely reveal His glory.”

Or: “If God had made nothing else but the moon, I would still be entranced forever.”

Or: “If God had made nothing else but the sky, I would still know—not just believe, but know—that there is a heaven.”

Or if a friend smiles at me, I’ll think, “If God had made nothing else but this smile, I would still know that there is an everlasting, personal source of light and joy.” 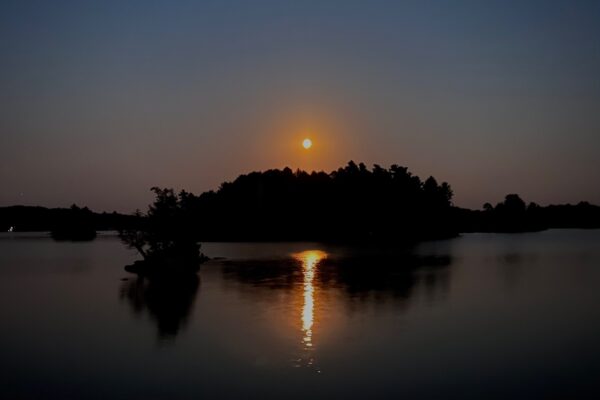 And so all things speak to me of God and reveal His nature, and Paul’s statement is perfectly true: “What may be known about God is plain, because God has made it plain. For since the creation of the world God’s invisible qualities—His eternal power and divine nature—have been clearly seen, being understood from what has been made, so that people are without excuse” (Rom 1:19-20).

Creation is the first book of God, and then there is the Bible, His other book. These days, more and more, whenever I open the Bible I can hardly read more than a few verses, because the light that pours from just those few words is so overwhelming.

And I think, “If the Holy Spirit had written nothing else but these words, He would still be, not just a great writer, but the One True Author.”

Or I think, “These few words alone are sufficient for living a wise, good, and godly life.”

Or: “If I had nothing else but these words, I would still know God.”

I use the word know deliberately. From all these things, and so many more, I not only believe in God but I know Him. I know He is real, true, loving, and the source of all good.

Yes, faith is important. But faith is not, as it is often portrayed, a leap in the dark. Rather faith is based on knowledge. It is based on the perception of things that are as plain as the nose on a face. As the author of Hebrews wrote, “Faith is being sure of what we hope for and certain of what we do not see” (11:1). Or as Peter confessed to his Lord, “We have come to believe and to know that You are the Holy One of God” (Jn 6:69). Or in the words of John, “We know and rely on the love God has for us” (1 Jn 4:16). Or in the Psalms the Lord says, “Be still and know that I am God” (46:10), and “Know that the Lord is God” (100:3). And when Naaman was healed of leprosy he declared, “Now I know that there is no God in all the earth except in Israel” (2 Kings 5:15).

Note that the verb know has two connotations, one referring to intellectual certainty, the other to personal relationship. These two meanings are reflected in French which has a separate word for each: savoir meaning to know rationally, and connaître to have personal knowledge. To know God is not just to know about Him, or to confess that He exists, but rather to it is to know Him personally, as one friend—or indeed a lover—knows the loved one.

The United States Declaration of Independence, after naming God in its first sentence, goes on in its second sentence, “We hold these truths to be self-evident.” Likewise the truths of Christianity are self-evident, plain as day. It is only the darkened human intellect that obscures and denies the reality of God and of His Son Jesus Christ.