Nicodemus brought a mixture of myrrh and aloes, about seventy-five pounds. Taking Jesus’ body, they wrapped it, with the spices, in strips of linen. This was in accordance with Jewish burial customs. –John 19:39-40

If you had participated in washing, anointing, and wrapping the dead body of Jesus Christ, wouldn’t you tell your children about it? Mightn’t you even point out the exact spot where it occurred? And would not your children tell their children, and so on down through at least a few generations? 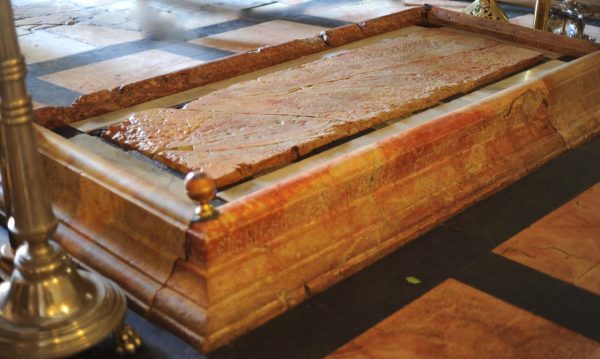 The Stone of Anointing in the Church of the Holy Sepulcher

Thus it transpired that the memory of this sacred place was preserved, and eventually a commemorative stone was installed in the Church of the Holy Sepulchre, perhaps even replicating an original anointing stone. Today this is surely the most stroked and caressed stone in the entire world. All day long people stoop to touch it, kiss it, or lovingly wipe handkerchiefs across it in hopes of collecting a trace of its original essence. Chiefly it is women who perform this devotion, for while John tells us that Nicodemus and Joseph of Arimathea prepared Jesus’ body for burial, the other three gospels report several women being present, including Mary Magdalene, Mary the mother of James, and Salome. On the morning of the resurrection these same women came to the tomb with more spices to complete the anointing, which must have been initially hurried on account of the approach of the sabbath.

The mention of Mary Magdalene is noteworthy, as tradition attributes to her a previous anointing of Jesus while He was still alive. Although Mary is not specifically named, we’re told that “a woman who had lived a sinful life” approached Jesus at table, “and as she stood behind Him at His feet weeping, she began to wet His feet with her tears. Then she wiped them with her hair, kissed them and poured perfume on them” (Lk 7:37-8). That this happened not in private but in public, between a man and woman, with the implication of worship and the scandalous details of the hair, the kissing, and the perfume—all these combine to produce an effect of sensational intimacy.

A similar story occurs in the other three gospels, but there it has a different setting (Bethany rather than Galilee), comes much later in Jesus’ ministry (a few days before His death), and is connected with a different Mary, the sister of Lazarus. Moreover there is the added dimension of Mary’s grateful reverance for the Savior who had raised her brother from the dead, even as she prophetically anoints this Savior for His own premature death.

Three of these accounts mention another item—an alabaster jar —pertinent to our theme of signifcant stones in the life of Jesus. Alabaster is a translucent whitish stone that was often carved into ornaments and vessels. The jar used by Mary was likely an alabastron, a long, drop-shaped vessel with a very narrow opening from which the precious ointment could be poured drop by drop. Hence we’re told that Mary “broke the jar” (Mk 14:3) in order to pour out its entire contents at once. Mark identifies the perfume as “pure nard” (or spikenard), the root of a plant found chiefly in India, and thus particularly expensive. The fact that it was worth “more than a year’s wages” seems to have been the last straw for Judas, who immediately afterwards betrayed Jesus to the chief priests. How ironic that, outraged by this extravagance, he turned around to accept the sum of thirty pieces of silver in exchange for the Pearl of Great Price.

In both these anointings, of Jesus dead and alive, what stands out to me is the sheer weight of the perfume: in one case seventy-five pounds (almost half the body’s weight), and in the other a different kind of heaviness, as “the house was filled with the fragrance” (Jn 12:3). Perhaps nothing is more redolent of what C.S. Lewis called “the weight of glory.”

Next Week:  The Tomb of Christ