Of the fourteen Stations of the Cross, the last five are in the Church of the Holy Sepulcher: Jesus is stripped; He is nailed to the cross; He dies; He is taken down; He is laid in the tomb. 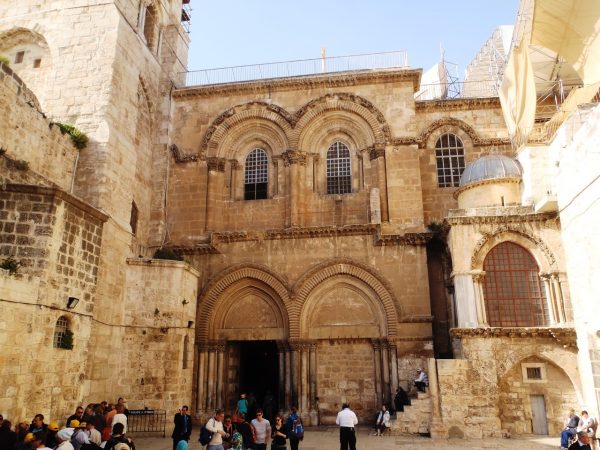 Entrance to the Church of the Holy Sepulcher in Jerusalem

In AD 135 the Emperor Hadrian, perhaps wishing to expunge any memory of these events, built a retaining wall around the entire site of Christ’s crucifixion and burial, filled it to form a platform, and erected a temple dedicated to Venus, goddess of love. For the next two hundred years Calvary and the tomb of Christ lay buried beneath this pagan shrine.

But the place was remembered. Two centuries later, in AD 325, the Emperor Constantine wished to build a church in Jerusalem to honor the resurrection. The obvious place to locate it was over the actual tomb of Jesus, but where was this? Local Christians testified to knowing exactly where it was: underneath a Roman temple of Venus. By Constantine’s order the pagan temple was demolished and excavations began.

Eusebius, at that time Bishop of Caesarea, gives an account of these excavations in his Life of Constantine: “As the subsoil appeared layer by layer, so did the venerable and sacred evidence of the Savior’s resurrection, beyond all our hopes, brought back to life as was our Savior.” Discovering a rock tomb, the workers chipped away at the surrounding stone to isolate it, then built a shrine to protect it. Nearby a rocky outcrop was uncovered, deemed to be the site of Calvary. Bear in mind that this happened only three hundred years after the resurrection, a short enough period for eyewitness accounts of these locations to have been orally transmitted. As historian Alan Millard points out, “Christians were so certain the tomb was buried there that they persuaded the emperor to order, and pay for, the demolition and excavation needed to clear it. If they had not known a tomb was there, they would hardly have dared suggest the work. What would the emperor have said if his men had found no tomb?”

Constantine proceeded to build a colonnaded rotunda over the tomb, a magnificent basilica, and an open courtyard known as the Holy Garden around the protruding rock of Calvary. As his desire was to construct “the finest basilica in the world,” the whole complex must have been a stupendous sight.

Sadly, all that remains today are the pillars from the Constantinian rotunda, cut in half for use in the present rotunda. And far from being the most beautiful building in the world, the current Church of the Holy Sepulcher is an architectural hodgepodge, repeatedly reworked on account of war, fires, earthquakes, and natural deterioration. Inside, it’s a warren of encrusted religious paraphernalia—candles, lanterns, icons, statues, filigree work—all fought over by the various denominations that fiercely stake their small claims. Six Christian groups share control of the church: Latin Catholic, Greek Orthodox, Armenian, Syrian, Coptic, and Ethiopian. But because these groups cannot get along (the very day I was there I witnessed two heated altercations), a prominent Muslim family controls the ten-inch-long key that has opened and closed the building every day since the twelfth century. So much for the old song, “They will know we are Christians by our love.”

Next Week:  The Anointing Stone