Today I had a very noisy quiet time. ‘Quiet time’ is what I call my morning prayer session, and I like it to be quiet. But today it wasn’t quiet, it was cacaphonous.

The moment I sat down to pray a tremendous storm broke over our town. I say ‘broke’ because that’s what it felt like—as if the very sky had broken, burst open, rent asunder in a kind of presage of the end of the world when “the stars in the sky will fall to earth and the heavens recede like a scroll being rolled up” (Rev 6:13-14). 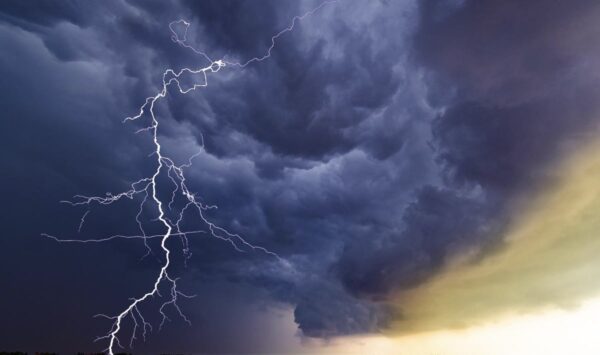 In all my life I have never experienced thunder like the thunder I heard and felt today. Normally thunder comes in peals—a loud crack followed by a rumbling, then silence for a little while before another big boom. But this thunder was continuous, rumbling-rumbling-rumbling without pause, like a long freight train lurching heavily over the sky, or several freight trains shunting around in a vast switching yard. And this went on and on—God be my witness—for about half an hour.

I’ve often been intrigued by that verse in Revelation which states “there was silence in heaven for about half an hour” (8:1). How awesome! Yes, but what about when heaven THUNDERS for half an hour? What could that mean?

Here’s what I think today’s thunder might be saying. In 1922 T.S. Eliot published his famous poem “The Waste Land,” a dire lament for the crumbling of civilization. Eliot’s poem has five sections, the five titles of which strike me as highly relevant for today. The five sections are: “The Burial of the Dead,” “A Game of Chess,” “The Fire Sermon,” “Death by Water,” and “What the Thunder Said.”

Ring any bells? We have entered an age of increasingly violent and catastrophic weather events. Fires roar, floods ravage, storms rage, and the dead are buried, all in unprecedented proportions. We all know this.

What we do not know, or pretend not to know, and what the media will never tell us, is that this is good news. It is good news because it means that God, the Sovereign Lord of all the earth, is still in control. He is on His throne, King of kings and Lord of lords, and He is not happy with the way we are raping, pillaging, and destroying His beautiful earth. He will not just stand by and watch it happen. This is not ‘Mother Nature,’ this is our heavenly Father showing His displeasure, warning us not to keep going down this path but to repent and believe the good news. He would say to us, “Return to Me, and I will return to you” (Mal 3:7). Our God is playing a game of chess with us, which He will win.

I don’t mean that God is up there hurling thunderbolts. I mean that, in His parental wisdom, He is allowing the consequences of our own sin to overtake us. When weather disasters ‘happen,’ we tend to regard them as hostile, as an enemy that is attacking us from outside. But this enemy is not outside, it is inside. This enemy is ourselves.

In terms of climate change, I live in a relatively protected area. No disaster has come (yet) to destroy my house and drive me into homelessness and famine. But I would be a fool to think this could not happen here, just as it is happening all over the world. And when it does, I hope to heaven that I will still be able to say, even in the midst of trauma, “This is good news, because it means God cares.” It means that a loving God cares for me, for the world, for our planet—cares too much to leave us to ourselves—and it means He is alive and well and speaking to us, warning us with continuous thunder.