Evelyn Underhill was a wonderful spiritual writer and teacher from a century ago. Last year during Advent I greatly enjoyed a little book called Advent with Evelyn Underhill. Here’s just a sample:

No amount of description really tells us anything about Holiness; but an encounter with it shames, amazes, convinces, and delights us all at once. “Thou art the Christ!” declares Peter. “My Lord and my God!” says Thomas. They recognize something from beyond the world. 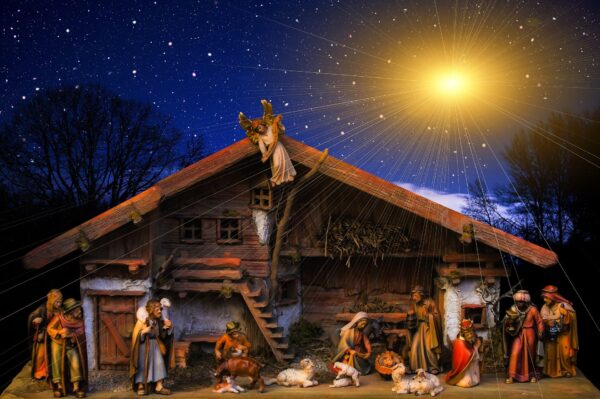 But nothing in the story of Christ, perhaps, is more significant than the quietness and simplicity of its beginning. The birth of the Child, the Shepherds and the Magi, the little boy of Nazareth and his wonderful experience in the Temple, and the long quiet years in the carpenter’s shop; there seems at first sight nothing very supernatural in these things. Indeed one of the most convicting aspects of Christianity is the contrast between its homely and inconspicuous beginnings and the holy powers it brought into the world. It keeps us in perpetual dread of despising small things, humble people, little groups.

Outside in the fields the heavens open and the shepherds look up astonished to find the music and radiance of Reality all around them. But inside, our closest contact with that same Reality is being offered in the very simplest, homeliest way—emerging right into our ordinary life. A baby—just that. The Incarnation means that the Eternal God enters our common human life with all the energy of His creative love, to transform it, to exhibit to us its richness, its unguessed significance; speaking our language, and showing us His secret beauty on our own scale.

Thus the spiritual life does not begin in an arrogant attempt at some peculiar kind of otherworldliness, a rejection of ordinary experience. It begins in the humble recognition that human things can be very holy, full of God. The Word has spoken; and spoken in the language of everyday life. And because of this, within that everyday life man always has access to God; and can never, at any point in his career, claim ignorance of the drift of God’s Will, even though his own duty and action may often be hard to decide.

So, because Holiness has entered our world, and appeared in our nature, we know that men and women can become holy; and are bound, in spite of all discouragements, to take an optimistic view of human life. The Church is an undying family which has its face set toward Holiness, and is fed upon the food which can, if we let it, produce Holiness. As the queen bee is produced by being fed from childhood on ‘royal jelly,’ and thus becomes the parent of new life; so it is what the Christian is given, and what he assimilates of the supernatural food—not what he is by nature—which makes him grow up into the life-giving order of God. The final test of holiness is not seeming very different from other people, but being used to make other people very different; becoming the parent of new life.

Advent with Evelyn Underhill is available in both paperback and e-book.