In 2014 I published a book of Christmas stories entitled Twenty-One Candles. To mark the beginning of Advent, what follows is an excerpt from my favorite story in that collection, “In the Stillness of the Night.” All you need to know is that the main character, Paul, is falling in love with a Polish woman, Agnieszka.

The next day Paul and Agnieszka cut down a tree and set it up at his place. Neither of them had any decorations, so they made paper chains, foil stars, popcorn balls. It couldn’t have been more old fashioned or more fun. Agnieszka had taken her hair out of braids and it cascaded around her, darkly luxuriant with gleaming highlights, like the river of her voice. 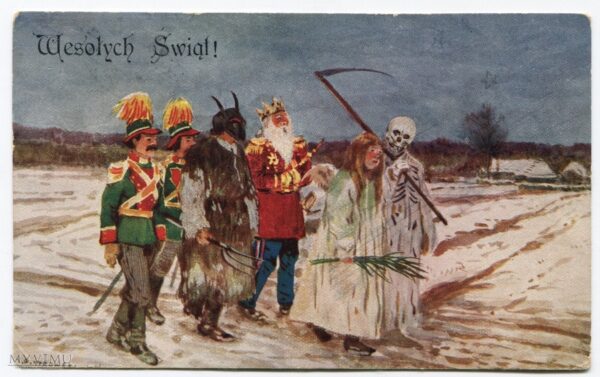 As they worked, she sang more carols and regaled him with stories of Christmas traditions in Poland. Throughout the season, she said, from Advent to Epiphany, the gwiazdory, or star carriers, wandered through towns and villages. Some put on szopki (puppet shows) or herody (nativity scenes), while others sang the koledy, which were religious carols, or pastoralki, secular shepards’ songs. Many of these dated back hundreds of years and all Poles knew them.

She gave him a record of a Polish soprano, Teresa Zylis-Gara, singing koledy. Recorded in a church at Christmas with an orchestra and choir, Paul thought it had an extraordinary sound. Deep, shining, otherworldly, holy. He wondered about the words.

“Gdy sie Chrystus rodzi?” She made lovely shapes with her lips when speaking Polish, and her eyes sparkled in thought. Finally she translated:

When Christ is born
And He’s coming into the world
The dark night drowns
In radiant brightness.

“Drowns in brightness …” he repeated. “I love that.”

He also loved the sound of her name, Agnieszka, which she told him meant pure or holy. Just like her voice, he thought.

In the days before Christmas Paul played the record over and over, especially the first song, Wsrod Nocnej Ciszy, and the last one, a haunting lullaby. How strange that another country could have a whole different set of carols—like a parallel universe.

On Christmas Eve Agnieszka cooked wigilia, the traditional Polish vigil supper. According to custom they waited to eat until the first star appeared, then began with the oplatek, the Christmas wafer. They were joined by Carl who had nothing else to do.

“If only it would snow,” said Carl, who worked at a stable, “I could take you lovebirds on a sleigh ride tomorrow, in a real cutter with Clydesdales and bells.”

By next morning the snow was drifting down like angel feathers. In the pewtery light of afternoon they went sleighing and the whole thing was as perfect as a Christmas could be.

Twenty-One Candles: Stories for Christmas is available in paperback or e-book.

Next Post:  Advent with Evelyn Underhill: The Music of Reality