Excerpt from The Furniture of Heaven

With Christopher Rainbow and me, right from the start it was one of those stormy romances: on again, off again, on again, off again. So when the news first came out about this new technique for merging two people into one, we simply made up our minds one night, he and I, to throw caution to the winds and give it a try. I guess it just seemed high time for us to take some kind of permanent, irreversible step, and so we thought–well, why not? Why not go all the way? 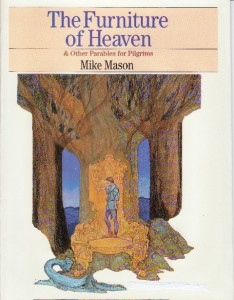 After all, people are always hopping into bed together these days, and it’s nothing for couples to shack up. So when this new method of total fusion was discovered, and we began seeing it advertised everywhere, it just seemed the natural thing for Christopher and me to do.

Of course, I realize it strikes many people as shockingly grotesque, the very idea of two separate people being literally melted down into one. But if you stop to think about it, it’s really no more peculiar a thing than shaking hands, say, or kissing-to say nothing of lovemaking! I mean, who ever dreamed up such things? However common they may become, the most ordinary gestures of intimacy retain a savor of strangeness. And ultimately, don’t they all point in the same direction, toward deeper and deeper union?

Naturally Christopher and I had a big church ceremony, all the details of which I won’t go into. But the moment itself, that moment when the two of us stood there hand in hand before the altar and then suddenly, physically, were melded together––how can I describe that? Well, one thing I’ll say is that instead of being inside myself, looking out at Christopher, suddenly I felt that I was inside Christopher looking out at myself! One moment I was mind in my own business, more or less, and the next moment I was minding business for Christopher Rainbow.

Looking back, I can see that before then, in spite of having a lover and all, really I was still behaving pretty much like my own person: single, autonomous, marching to a private drum. And expecting Christopher just to tag along! It was almost as though I were the only person on earth, lost in my own little dream world. But ever since that mysterious transaction at the altar, like it or not I’ve found myself living not my own life but Christopher’s: doing Christopher’s work, thinking Christopher’s thoughts, getting used to Christopher’s body as being my own body, and trying, however clumsily, to do all things just the way Christopher wants them done. And since there is legally only one living person now in place of two, I even took his full name, first and last, as my own: Christopher Rainbow.

My parents, predictably, were outraged. They’d been dead against the thing all along, refusing even to attend the ceremony. But you should have seen them the day Christopher and I walked into their home as one person! I mean, on top of everything else, Christopher has this thick foreign accent, which to my ears sounds adorable, though I know it turns a lot of people off. So even before we got in the door my parents heard my familiar voice all mixed up with that alien voice. And as soon as they laid eyes on the face of their dear daughter pressed shamelessly into the face of this foreigner, and saw my lips moving with his in a kind of perpetual osculation––well, they just freaked out. They had no idea who I was anymore, they said, and merely to look at me, all wrapped up in that man, sent shivers down their spines.

with a strange man was something unutterably disgusting, even perverted, for a decent woman to do. Well, if it had been anyone besides Christopher Rainbow, I’m sure I’d agree with them. But Christopher just happens to be the soul of decency, a paragon of purity and goodness. And how can you argue with true love?

I don’t mean to imply that it’s all been smooth sailing for Christopher and me. We’ve had our ups and downs, believe me, and I can’t honestly say I don’t ever miss myself, the way I used to be. The fact is, I do get frustrated not being able to run my own show. I know it’s silly, since there’s no going back now. But it’s one thing to be one with another person, and it’s another thing altogether to act as one. In the beginning, especially, the two of us weren’t coordinated at all, and I’m sure that’s partly what put my family off. It was as though I and a perfect stranger had thrown a moth-eaten blanket over our heads and were pretending to be a dancing horse. We kept stepping on toes, knocking over lamps, getting in each other’s way. And we were constantly having these long, tedious discussions about how to work things out. My feeling was that the only sane way to operate was on a fifty-fifty basis: half the time we’d be me, and the other half we’d be him. What could be fairer than that? But Christopher, being from the Old Country, wouldn’t hear of it. He seemed determined not just to share my life but to take it over completely.

So it hasn’t always been easy, living in Christopher Rainbow, or having him living in me. He can be so difficult to figure out sometimes, so full of inconsistencies. I mean, first he’ll say one thing, and then he’ll say something else that sounds exactly the opposite. Or we’ll be on our way to the supper table, for example––and I’ll be starving!––and suddenly he remembers that he has to make this important phone call, and the next minute we’re throwing on our coat and heading out the door to some dire emergency. And right in the middle of that, he’s liable to stop and spend some time playing with the neighborhood kids! That’s just the kind of man he is. You never quite know what he’s going to do next. Yet somehow he expects me to keep up with all of this, and even to read his mind. Because he’s doing it all, remember, inside of me, right inside my mind and body. Sometimes all I want is just to get on with a few innocent little plans of my own––like vegging in front of the TV, maybe, or fooling around with some of my old friends, or sleeping in on a Sunday morning. I tell you, it can be mighty painful, always being yanked in two directions at once.

But then, I guess the truth is that I felt much more like a schizophrenic before meeting Christopher Rainbow than after. For somehow, in spite of everything, I have to admit I’m more myself now than I’ve ever been. That’s why I can so heartily recommend this new technique of fusing people together, whatever little problems it might create. The better I get to know Christopher on the inside, the more his odd behavior on the outside seems not so crazy or inconsistent, but begins to make sense. You really have to walk around in a person’s shoes in order to see things their way.

And talk. It takes a lot of talking. Even now, not a day goes by when the two of us don’t have to sit down together and sort out the issue of our union and what it all means. Again and again Christopher has to explain patiently to me that what actually happened, that moment before the altar when I got joined to him, was that I died to my old existence, and a brand-new person was formed. Can’t I see how preposterous it is, he’ll argue, for me to keep on trying to revert to my old independent self, when that self is now nothing but a dead shell? When I don’t even have a living body to call my own anymore?

“Oh, but I don’t,” he answers softly. “Aren’t you forgetting that

And at that, the very shadow that crosses his face will steal across mine, and I’ll feet my lips begin to tremble just as his do, and in my eyes––which are really our eyes––the tears will spring. And then in our heart I’ll know that he is right. Then I’ll know that fifty-fifty is impossible, and that nothing makes sense anymore but for the two of us to become totally and unconditionally identified, immolated into one another.