A poor widow put in two very small copper coins, worth only a fraction of a penny. –Mark 12:42

If we want to get technical in this book about stones in the life of Jesus, we must admit that a number of miscellaneous materials—including pottery, glass, and metals—are all forms or components of stone.

Pottery is made from clay, glass from sand, and metals consist of pure elements that combine to form rock. 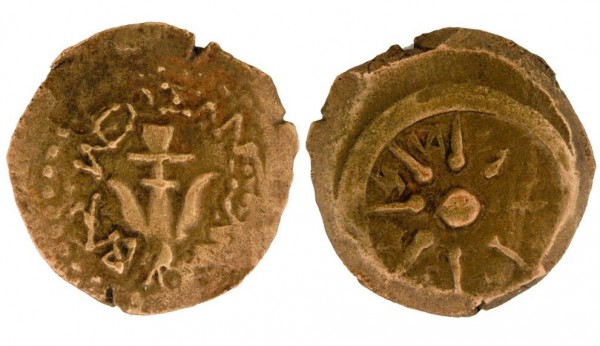 For now, let’s focus on metals—gold, silver, copper, bronze— specifically as found in coins. For someone who had none of it, Jesus talked a lot about money. His basic teaching may be summed up by Matthew 6:24: “You cannot serve both God and Money.” Money features in a number of parables, and several gospel events involving coins take on parabolic significance. In one of these, a widow who contributed “all she had to live on” to the Temple treasury had, according to Jesus, “put in more than all the others” (Lk 21:3-4). Her contribution was two lepta, not even enough in today’s terms to buy a single sheet of paper. As the smallest and least valuable coin in circulation in Palestine, the copper lepta or “widow’s mite” bears comparison with the mustard seed of the parable, which, though “the smallest of all your seeds,” nevertheless grows into “the largest of garden plants” (Mt 13:32). In the economy of Jesus, what determines the worth of money is not face value but faith value.

Lepta coins were struck in Jerusalem from the time of the earliest Maccabees through the reign of Herod the Great. They came in several varieties, one of which (illustrated) had an eight-rayed star on one side and on the other an anchor, symbolizing naval strength, with the Greek inscription “Of Alexander the King.” This coin was minted under Alexander Yannai, a high priest who also styled himself king. To see most of the stones in this book you would have to go to the Holy Land, but here’s one you can obtain cheaply on eBay and hold in your own hand.

In another gospel story involving a coin, we learn that Jesus, among the various laws He regularly broke, did not consider Himself a taxpayer. When asked by the Temple goons whether his master didn’t pay the two-drachma tax (one drachma being a laborer’s daily wage), Peter lied by saying, “Yes, He does.” Poor Peter—caught yet again being ashamed of Jesus. But Jesus bailed him out with one of the oddest miracles in the Bible: “Go to the lake and throw out your line. Take the first fish you catch; open its mouth and you will find a four-drachma coin. Take it and give it to them for my tax and yours” (Mt 17:27). Feel strapped for cash? Just remember that God has His own mint, and mosey on down to the old fishing hole. 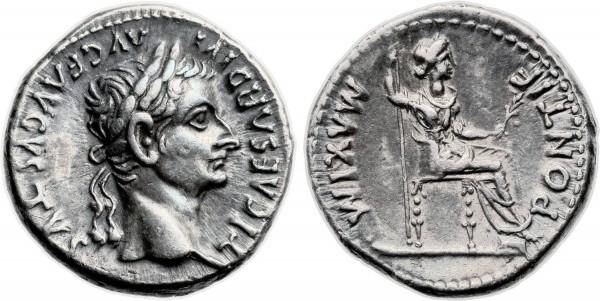 In a third living parable about money, Jesus answers a trick question from the Pharisees by pointing to a Roman coin and saying, “Whose portrait is this? And whose inscription?” (Mk 12:16). The coin in question was a silver denarius stamped with the head of the Emperor and the Latin inscription “Tiberius Caesar, son of the divine Augustus.” On the reverse was a picture of the Roman goddess of peace, Pax, with the words “High Priest”—a further irony in the hands of the true High Priest and Prince of Peace. Such coins were not minted in Judea because they were offensive to the Jews. Indeed the reason the outer court of the Temple was full of moneychanging tables was that no coin with a pagan symbol could be used, nor even dropped into an offering box, in that holy place. Thus when Jesus asks the Pharisees for a denarius He is already embarrassing them. As this is the only account we have of Jesus handling a piece of money, if you ever get to hold one of these coins in your hand it will be difficult not to wonder who may have touched it two thousand years ago.

Next Week:  The Forbidding Placard