Very early on the first day of the week, just after sunrise, they were on their way to the tomb and they asked each other, “Who will roll the stone away?” –Mark 16:2-3

On the first Easter morning, the women who wanted to anoint Jesus’ body with spices had a problem. Who would move the stone from the tomb entrance?

Obviously the stone was too heavy to be rolled uphill by three women: “It was very large” (Mk 15:4). But they went in faith, hoping that something would work out. 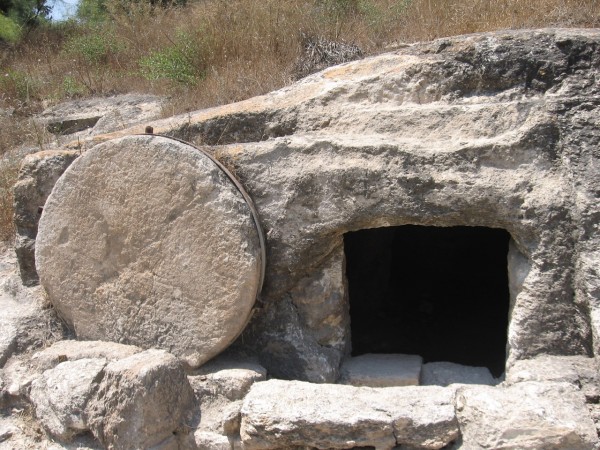 The photograph shows a typical rolling rock tomb similar to the one in which Jesus would have been buried. Only a few such tombs have survived from the Second Temple period. The closing rock, about five feet in diameter and a foot thick, would have weighed nearly half a ton. Fitted into an inclined track, this rock was rolled downwards to close, then up to open and wedged in place with a smaller stone. Such elaborate tombs were reserved for the wealthy—the most famous being the tomb of Herod’s family, and the so-called Tomb of the Kings. Joseph of Arimathea, who donated his own tomb for Jesus’ burial, was indeed a rich man.

The first human witness of the Lord’s resurrection was Mary Magdalene. But another witness preceded her, even before the angels. The first witness in all of creation was a rock—the rolling rock that sealed the tomb. Mute, motionless, lifeless, a stone has absolutely no control over its destiny. Nevertheless, is there not a sense of presence about a rock—almost as if it might have a kind of soul? To such a mere stone was the glory of the risen Christ first revealed.

Although Jesus had repeatedly predicted His resurrection, no one believed Him. The women were expecting to find a dead body, not a living God. Their behavior is understandable, even admirable—just as ours may be when we presume we are acting in faith when really we are bargaining on death. Our world is not geared for resurrection. We look at the big rocks in our lives, the massive obstacles keeping us from being free, happy, healthy, and we wonder who will move them. Who will help us to anoint the body of our sadly defeated god?

When St. Cuthbert was building a stone wall on his island retreat off the northeast coast of England, visitors wondered how a hermit had been able to move several very large rocks. In the case of an exceptionally big one, Cuthbert enlisted the help of four brother monks from his home monastery. They brought a cart and worked with all their might, but when the cart broke down they were not able to complete the task. Returning some time later, however, they saw the huge rock mysteriously in place, just where Cuthbert had wanted it. Perhaps the saint took literally the words of Matthew 17:20: “If you have faith as small as a mustard seed, you can say to this mountain, ‘Move from here to there’ and it will move.”

As long as our eyes are on the heaviness of the tomb rock, that rock will be a millstone around our necks. But trust the mysterious hand to roll it away, and it grinds the grain of the rising bread of life. Our Jesus is not dead—He’s alive! It’s rock ‘n roll time!

(Note: So far this book has followed the story of Jesus chronologically. This week, however, Chapter 63 appears out of sequence in observance of Easter. Next week the proper sequence resumes with Chapter 43.)