He Himself is our peace, who has made the two one and has destroyed the barrier, the dividing wall of hostility. –Eph 2:14

So far we have examined impressive first-century remains from the Temple Mount platform and from some of its auxiliary structures. When it comes to the Temple itself, however, the fact is that not a single positively identifiable stone survives. 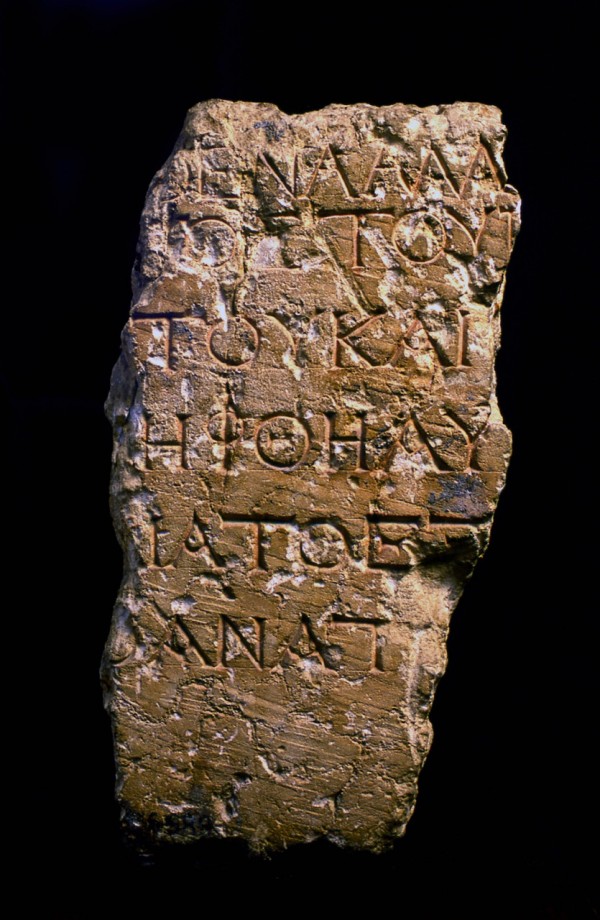 The image accompanying this chapter is as close as archaeology has come to affording a glimpse of this sacred edifice. What you see is a fragment of a stone placard that was posted at regular intervals along a five-foot high stone balustrade separating the Court of the Gentiles from the Temple proper, with a text forbidding any Gentiles to come closer. Josephus describes these placards as being written in both Greek and Latin. A slab bearing the complete inscription was found in 1871 by a French archaeologist, built into a house close to the Antonia Fortress. That one is currently located in the Archaeological Museum of Istanbul. But the Israel Museum possesses the illustrated fragment, found in 1936, which is especially interesting for showing that the letters were originally painted red to make the words stand out against the white limestone. In Greek characters nearly one-and-a-half inches tall the full inscription reads:

No stranger is to enter within the balustrade around the Temple and enclosure. Whoever is caught will be responsible to himself for his death, which will ensue.

The odd wording of this harsh warning underlines the fact that Jews could not legally impose the death penalty, but had to refer offenders to the Romans—which is exactly what happened in the case of Jesus. Paul also ran afoul of this prohibition when he was accused (falsely) of bringing Greeks into the Temple area, thus instigating a riot (Acts 21:28).

Jesus would no doubt have seen this placard often in His visits to the Temple. I can’t help but wonder what may have passed through His mind as He looked at it. Surely He must have mused on the ultimate end of His mission, which was to “make disciples of all nations” (Mt 28:19)? Although He said, “I was sent only to the lost sheep of Israel” (Mt 15:24), nevertheless He healed a Canaanite woman (v 28), delivered a Gadarene demoniac (Mt 8), preached to a Samaritan (Jn 4), and gave many other signs that His mission was to the whole world. As Paul wrote, “There is neither Jew nor Greek, slave nor free, male nor female, for you are all one in Christ Jesus” (Gal 3:28). And as Jesus Himself prayed, “May all of them be one, Father, just as You are in Me and I am in You” (Jn 17:21).

Next Week:  Christ the Cornerstone