As research for my current project, a book on the spirituality of sleep, I arranged a visit to the Sleep Clinic in Parry Sound, an hour’s drive north of where I live.

Prior to my visit I had to fill out a 35-page form including questions such as:

1) Have you ever had unusual feelings inside or on your body?

2) When laughing or becoming glad or angry, have you ever noticed your mouth opening?

Needless to say, I answered yes to all three. 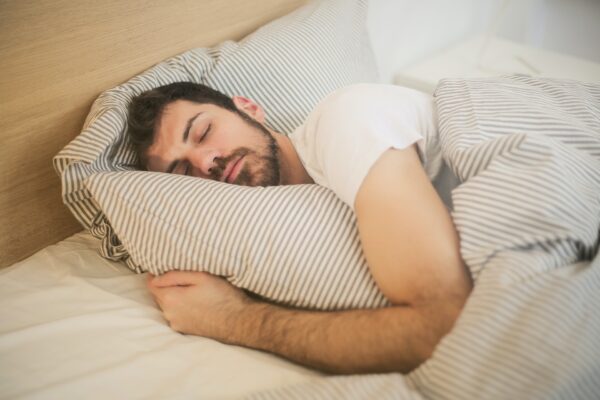 Upon arrival at the clinic I settled in to my very basic room—a kind of monk’s cell with spartan hospital furnishings, flourescent lighting, and a single bed with an unaccountably tall, elaborate headboard. Here I had some supper, read, and prayed until eight o’clock when the technician, a young man named Vikram, entered with a clipboard.

Normally awake until one o’clock, thinking I was making a generous concession I replied, “How about midnight?”

Vikram shot me a look that could have curdled whiskey. “Sir,” he said sternly, “you came here to sleep. Shall I put you down for 10:30?”

At ten Vikram returned to plaster me with electrodes, twenty in all, on legs, shoulders, and scalp. I cracked some jokes which Vikram rewarded with not even a chuckle. A taciturn, no-nonsense fellow, his mouth did not open once. Maybe he hadn’t had sex lately? His coup de grâce was to equip me with a plastic nasal cannula, something I hadn’t anticipated. Normally I blow my nose a couple of times in the night. Not tonight, I guess.

“And what happens in the morning?” I ventured to ask. “Do I just wake up whenever?”

To which Vikram responded, like a parent to a troublesome child, “We’ll discuss that later.”

And so, wired to the gills (difficult for a side-sleeper, having to turn back and forth) and watched over by machines of loving grace, I hit the sack. Uncharacteristically, I lay awake for an hour, but then surprised myself by sleeping soundly for four hours straight. Then, in order to go to the bathroom, I had to call Vikram to unplug me. Walking down the brightly lit hallway with all my wires, I felt like a cyborg.

Back in bed, I was fully awake, and after an hour I knew that was it—no more sleep tonight. Fortunately I felt extremely peaceful, with that deep presence of God which sometimes comes at night. Better than sleep.

At 6:30 Vikram snapped on the lights. He must have been a morning person because he actually asked me, “How did you sleep?” and we had a little chat. I wanted to know what the proper term was for his profession, and he told me he was a ‘polysomnographologist.’ I said I’d never met one of those. (Polysomnography is the monitoring and recording during a person’s sleep of various parameters such as brain activity, breathing, and limb movements. Produces a polysomnogram.)

After breakfast I did some reading, then settled in for the day’s routine. At a sleep clinic it’s not just nighttime sleep they want to monitor, but naps, so I was assigned four twenty-minute naps spaced two hours apart. The hope was that I’d go to sleep, but I didn’t; I just lay on my back and enjoyed times of contemplative prayer, much as I do at home.

Finally, late afternoon, I was released, well pleased with my little spiritual retreat, and very happy to have survived a night with the wires.

Next Post:  Dearest Sister Wendy: A Surprising Story of Faith and Friendship