NEW CHRISTMAS STORY!  This one’s not in my book Twenty-One Candles because it’s brand new for 2014.  Merry Christmas, everybody! 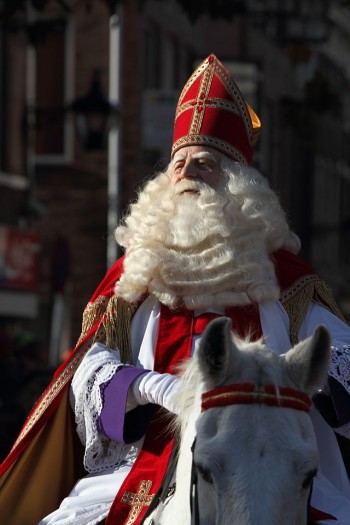 In the beginning, North Pole Enterprises was just a small operation. Santa had no elves, no reindeer, no big toy factory. It was just him and the wind, blowing across the arctic tundra.

Then Santa said, “Let there be a string of Christmas lights!” And there was.

Then, “Let there be more strings! Let’s call it String Theory.” And behold—the lights appeared, like so many stars dusting the night sky.

Then Santa said, “Let there be northern lights! And let there be reindeer! And snowflakes! And snowballs! And frost, and a moon, and moonbows!”

Santa was really, really having fun.

But something was missing. Or rather—someone. Santa wanted helpers.

And so he made the elves.

“I can make anything I want,” thought Santa. “So why not make some creatures like myself, who can also make anything they want? Then there will be no end to all we can make together. We’ll have ourselves a blast!”

For a creative guy, this was the ultimate challenge. But Santa took a handful of snowflakes, laid one finger aside his nose, and it was done.

Immediately the elves set to work with silver hammers to construct a workshop, a jet-propelled sleigh, a pile of toys, and a barber pole for the company logo.

The elves were really, really having fun.

But Santa thought: What was all this for? Themselves? No, there had to be more.

And so Santa made the Whole Wide World, and he called it “WWW.” And he peopled it with, well, people—beings larger than elves and made, not from snow, but from mud.

Santa was very pleased with the people. So pleased that for a while he rested and just admired them.

But things did not go well for the new world. Some elves ran amok, and once they got among the people all hell broke loose. And the rest, as they say, is history.

Finally Santa declared the Whole Wide World a bust and he settled down to live a quiet life with the good elves.

But he could not forget his world. He could not help making plans for it. Big Plans.

Plans to wish it a Merry Christmas!

So one night in the dead of winter, the eve of Santa’s birthday, the elves tucked him into his sleigh with a big bag of toys and his polar bear rug, packed him a lunch and a flask of hot toddy, spanked his team of reindeer on their bottoms, and away they all flew into the night sky, heading south (which is, of course, the only direction you can head from the North Pole).

Nowadays Santa comes down the chimney. But that’s not how he did it at first. In those early days he just dropped the presents from the sky, straight into the chimneys as the sleigh zoomed past. Much quicker that way.

Santa liked the idea of people waking up to all his surprises, wondering where they came from. Little children, of course, knew that such wonderful things could only come from Santa Claus. But the adults tried to explain the gifts away, and even came to believe that they had provided the gifts themselves—that they themselves were the real Santa Claus! In time it became common knowledge that Santa Claus did not really exist. If he did, why didn’t he ever show himself?

For Santa’s part, half the fun came from being invisible, a hidden benefactor. He didn’t want people fawning all over him. All he wanted from them was quiet hearts of thanksgiving.

As it was, people exploited his gifts, fought over them, sold them for profit, peddled cheap imitations. The annual winter festival turned into a commercial extravaganza with no true spirit of giving but only taking, selling, squabbling.

“I’ve given them everything I know how to give,” thought Santa, “and yet they are not happy. Somehow they have a way of turning every good thing into a bad thing. They are not creators, as I am, but destroyers. How can I set right what has gone so wrong?”

Santa had an idea.

This time it was a midsummer day when he headed south, far south. He ditched his sleigh and walked, walked into the world of people. It was hot as blazes down there, and having shed his furry red suit and big black boots, he went around like a hippie in a tattered robe and beads and sandals, telling tales of the North Pole.

But the people had seen all these things a thousand times before.

“Make us new things!” they cried. “Give us toys and games!”

So he did. He made Lamborghinis, iPhones, a Space Station. He made other things, too, that no one had ever imagined. And he did it all simply by laying one finger aside his nose—though not always the same finger, and never quite at the same angle.

But the people, instead of being amazed, grew mad with greed and jealousy.

“Making all this stuff for free out of nothing,” they accused, “you’re ruining our economy!”

They badgered him to reveal his secret, until finally the ragged drifter told them straight out, “I am Santa Claus. The man himself.”

What!? How ridiculous! How scandalous! Incensed, the people scooped up handfuls of dirt to throw at him.

And donning his majestic red robe, before their eyes Santa disappeared.

Most people never knew the difference.

But the children—they knew. Every child knows the real Santa Claus from the fake. To see him, one must have a child’s heart. Steal downstairs in the wee hours of Christmas Eve and you may spot him emerging from your chimney, plunging out of the great silent night and down through that narrow, dark passage, coming into the world like any child. 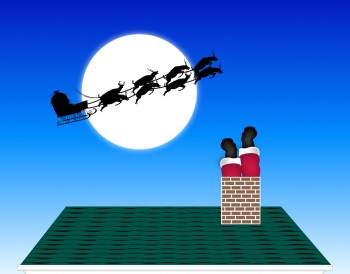 (Photo of Sinterklaas by Sander van der Wel on Flickr)