My favorite character in literature is Father Zossima, the saintly old monk who forms the spiritual center of gravity in Dostoyevsky’s last and greatest novel, The Brothers Karamazov. On his deathbed, in the climactic scene of the first half of the book, Zossima reflects in the following words on his childhood and on the biblical story of  Job: 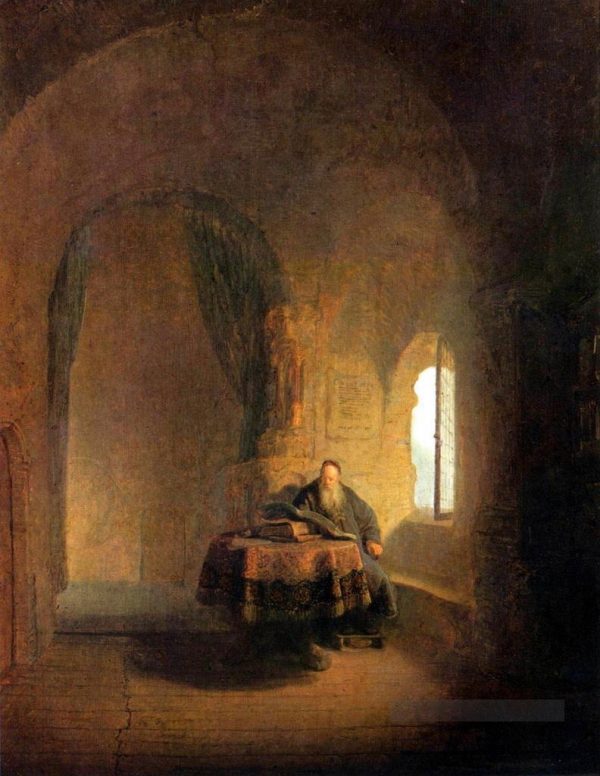 Even before I learned to read, I remember how I was first moved by deep spiritual emotion when I was eight years old. My mother took me alone to church, to morning mass on the Monday before Easter. It was a sunny day, and I recall now, just as though I saw it again, how the incense rose from the censer and floated slowly upwards and how through a little window from the dome overhead the sunlight streamed down upon us and, rising in waves toward it, the incense seemed to dissolve in it. I looked and felt deeply moved, and for the first time in my life I consciously received the first seed of the word of God in my soul, as a boy stepped forth into the middle of the church carrying a big book, so big that I thought he could hardly carry it, and laying it on the lectern he opened it and began to read. It was then that I suddenly understood for the first time, for the first time in my life, what it is they read in church: “There was a man in the land of Uz, and that man was perfect and upright …”

As Father Zossima retells the ancient tale in his own words and reflects on it, we can almost see his thoughts blending into those of Job himself, as if these two saintly old patriarchs were somehow being mystically united, just like the incense and the sunlight:

Since then—even yesterday I took it up—I have never been able to read this sacred tale without tears. And how much that is great, mysterious, and unfathomable there is in it! Scoffers say: How could God give up the most loved of his saints to Satan to play with, take his children from him, smite him with sore boils so that he scraped the corruption from his sores with a potsherd—and for what? Just to be able to boast to Satan, “See how much My saint can suffer for My sake!” But the greatness of it all lies just in the fact that it is a mystery—that the passing earthly show and the eternal justice are brought together here, and in the face of the earthly truth the eternal truth is accomplished. Here the Creator, just as in the first days of creation He ended each day with praise—“What I have created is good”—now looks upon Job and again boasts of His creation. And Job, praising the Lord, serves not only Him but all His creation for generations and generations and for ever, since for that he was ordained. Lord, what a book it is and what lessons it contains! What a book the Holy Bible is! What a miracle and what strength is given with it to man! It is just like a sculpture of the whole world and all its human characters, with everything named there and everything shown for ever and ever. And what mysteries are solved and revealed: God raises Job again, gives him wealth again, and many years pass by and he has other children and he loves them. Good Lord, but how could he love those new ones when his old children are no more, when he has lost them? Remembering them, how could he be completely happy with the new ones, however dear they might be? But he could, he could! The old sorrow, through the great mystery of human life, passes gradually into quiet, tender joy; the fiery blood of youth gives way to the gentle serenity of old age. I bless the rising sun each day, and my heart sings to it as of old, but now I love its setting even more, its long slanting rays and the quiet, gentle, tender memories that come with them, the dear images from the whole of my long and blessed life—and over it all Divine Truth, tender, reconciling, and all-forgiving! My life is drawing to a close. I know that, I feel it. But I also feel every day that is left to me how my earthly life is already in touch with a new, infinite, unknown but fast-approaching future life, the anticipation of which sets my soul trembling with rapture, my mind glowing, and my heart weeping with joy.

Next Post:  Be Still and Know: Contemplative Prayer (Part 1)

Posted in Stories and Excerpts and tagged Dostoyevsky, Father Zossima.