He said this while teaching in the synagogue in Capernaum. -John 6:59

A husband and wife who could not agree on where to go for their vacation finally settled on a compromise. The first year they would go mountain climbing in Austria—the husband’s choice—and the following year they would fulfill the wife’s desire to visit the Holy Land. 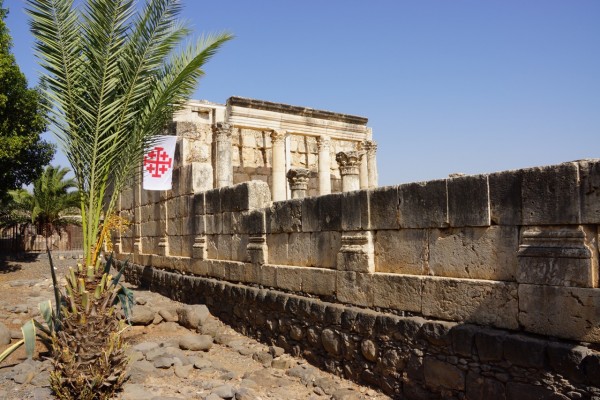 When it came time for the second trip, however, the husband was a most reluctant pilgrim. He traipsed around with the tour group, looking bored and complaining of the heat. One day they attended an outdoor mass in Capernaum, where John 6:54-9 was read, beginning, “Whoever eats my flesh and drinks my blood has eternal life.” At the mention of “the synagogue of Capernaum” in the last verse, the man looked over at the ruins of the very synagogue where Jesus had preached this message, and he began to cry. Later he told his wife, “I’m not a reluctant pilgrim anymore because I’ve realized where I am.” The stones had cried out to him.

The synagogue of Jesus does indeed still exist in Capernaum. Not much of it is above ground; what you see primarily are the ruins of a Byzantine synagogue made of polished white limestone. But directly beneath this structure, visible at all four corners, are the black basalt walls of the synagogue where Jesus and His disciples worshiped. The date of this original building has been confirmed by pottery finds, but although the walls are four feet thick, the stones are considered too fragile to be excavated. A few other Galilean synagogues have been unearthed, however, which give a good idea of what the one in Capernaum must have looked like: mosaic floor, multicolored frescoes, stone benches built into the walls all around the interior, pillars holding up a lightly timbered roof.

Besides the town site and ancient synagogue, a number of Roman-style buildings have been discovered at Capernaum, including a bathhouse. Relations with the cohort of Roman soldiers in this Jewish town appear to have been good, due to the presence of a godly centurion who was the synagogue’s patron. When this commander’s servant was at the point of death, a delegation of Jewish elders approached Jesus on his behalf, saying, “This man deserves to have you do this, because he loves our nation and has built our synagogue” (Lk 7:4-5). It wasn’t this that impressed Jesus, however, but the fact that this proselyte was one of only two people in all Israel (both foreigners, the other being a Syro-Phoenician woman) who had faith that healing power could work at a distance. The centurion understood clearly how the worldly chain of command translates to the spiritual realm: “I say to my servant, ‘Do this,’ and he does it” (v 8). Nor was it just his faith but his humility that won the Lord’s favor. Indeed his salutation to Jesus has been enshrined as one of the most beautiful moments in the Catholic mass, as moments before receiving the eucharist the congregation prays, “Lord, I am not worthy that You should enter under my roof, but only say the word and my soul shall be healed” (based on Mt 8:8).

If you were in old Capernaum right now, you too could attend a eucharistic service beside the stones of the synagogue where Jesus first taught about the eucharist. But you don’t need to go there, for stones are everywhere, and they are wonder enough. Wherever you are, just pick up a stone, look at it, feel it. You hold in your hand hard evidence of a Creator God, of Someone who fashioned this small sculpture as purposefully and lovingly as Michelangelo did the Pièta, knowing that one day you would examine it and ponder the meaning of existence.

And realize, perhaps, where you are.