When Jesus came into Peter’s house, He saw Peter’s mother-in-law lying in bed with a fever. –Mt 8:14

The Christian church began in houses. To this day there are house church movements, especially in countries where Christianity is banned from public expression. 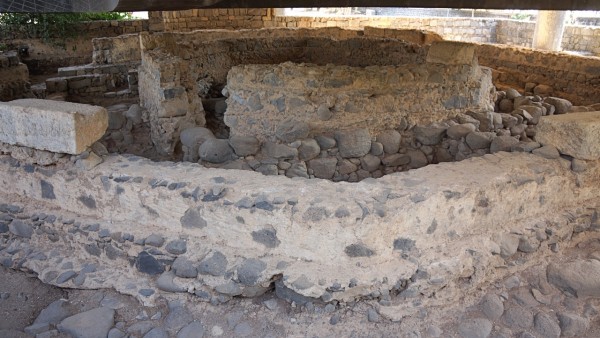 In many ways the house church has always been the heartbeat of this faith. What you see in the photograph is the original house church: Peter’s house in Capernaum. As a place of worship for the early Christians, this probably pre-dated even Jerusalem’s “upper room” where we know the disciples gathered after Jesus’ resurrection. For He had told them, “After I have risen, I will go ahead of you into Galilee” (Mk 14:28), and the first natural rendezvous point would have been the house in Capernaum.

At least three other churches have been built over this house: a twentieth-century building that looks like a space ship; an octagonal basilica from the fifth century whose foundations are visible as the outer ring in the photograph; and before that, in the inner ring, what appears to have been a meeting house created within a simple first-century dwelling. Unlike other houses excavated around it, this one exhibited a number of structural changes dating back to the first and second centuries. The floor had been plastered and the rough walls carefully reworked and covered with inscriptions in five languages, testifying to faith in Jesus as Lord and Christ, the “Most High and Good,” and to veneration for Peter, the local saint. Moreover this house contained hardly any domestic ceramics but many oil lamps. All in all, a great deal of significance seems to have been attached to this one humble room.

Conclusion: This was indeed the house of the Peter the Apostle. Located just a hundred feet from the lakeshore to the south, and an equal distance from the synagogue to the north, its walls are made of the same native black basalt as those of the ancient synagogue. Two of the earliest accounts by pilgrims to the Holy Land—Egeria in 385 and Anonymous of Piacenza in 570—testify that the house of Peter was indeed venerated from earliest times and turned into a church. In short, if archaeological sites were rated as to probable authenticity, this one would get five stars. Certainly it ranks higher than the many other supposed relics of Peter, mostly in and around Rome: prison chains he wore, a stone pillow with the imprint of his head, another stone imprinted by his knees where he prayed. Even his bones have apparently been discovered in a crypt deep below the high altar of St. Peter’s Basilica.

Yet this humble abode in Capernaum is what draws my attention. This is where, upon meeting Peter’s bed-ridden mother-in-law, Jesus “touched her hand and the fever left her” (Mt 8:15). That same day “the whole town gathered at the door, and Jesus healed many” (Mk 1:33). On two sides Peter’s house abutted public courtyards that could have accomodated the crowds, part of the reason why Jesus apparently established this place as both ministry center and home base. Indeed it was probably this same house where, on another day when “so many gathered that there was no room left, not even outside the door,” Jesus healed a paralytic lowered through the roof by his friends (Mk 2:1-12). Imagine how Peter must have felt having his roof torn apart!

And imagine all the other stories these stone walls could tell. Of all the artifacts found here, one is especially eloquent: a pair of first century fishhooks. Besides the cross itself, is there a more fitting symbol for the religion that arose in Galilee?