Leaving Nazareth, He went to live in Capernaum. –Mt 4:13

The ancient village of Capernaum (which means town of Nahum) was located on the north shore of the Sea of Galilee, some three miles west of where the upper Jordan River flows into the lake from the northern mountains.

In Jesus’ day its population was about 1500, small compared to several much larger cities on the lake. But Capernaum was strategically important for being on a primary trade route known as the Via Maris (Way of the Sea) that carried traffic from the interior along the top of the lake toward the Mediterranean coast. In Capernaum Jesus called five of His disciples: the four fishermen Peter, Andrew, James and John, and the tax collector Matthew. In fact there were “many tax collectors” stationed here, showing that this was a significant financial center, as well as hosting a detachment of Roman soldiers (Mt 8:5-13). 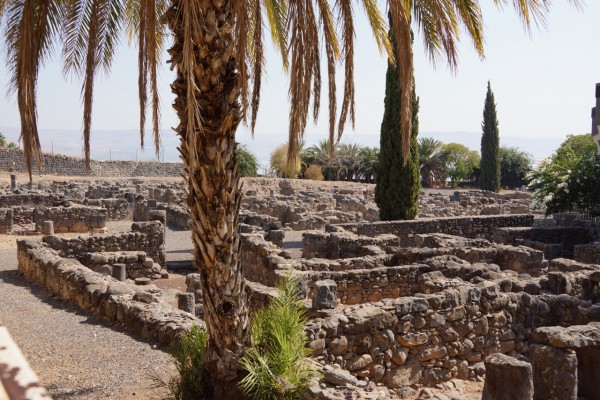 Discovered by the explorer Edward Robinson in 1838, the ruins of this village reveal a network of adjoining houses built of undressed and unmortared basalt blocks, reinforced with stones and mud. A typical single-story house, accomodating two or more kindred families, consisted of small rooms with cobbled floors arranged around an open courtyard, with stone steps leading up to a roof made of light wooden beams, thatch, and packed dirt. Numerous stone artifacts found at the site include olive presses and millstones, dishes and craters (large bowls for mixing wine), and the earliest known pictorial representation of the Ark of the Covenant. The second photograph shows another interesting discovery, the so-called Zebedee inscription which, though it dates from the fourth century, mentions the family name of the father of James and John, “the sons of Zebedee” (Mk 10:35). The full inscription reads: “Alphaeus the son of Zebedee the son of John made this column. May it be for him a blessing. 4th century AD.” 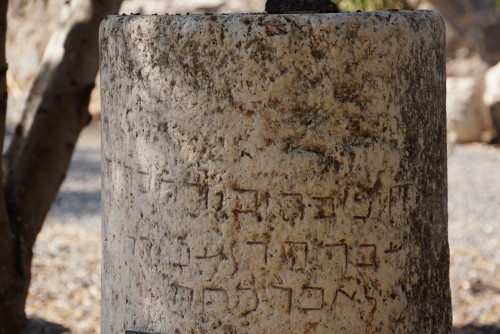 It was here in Capernaum that Jesus chose to establish headquarters for the early part of His ministry. Matthew refers to it as Jesus’ “own town” (9:1) and many chapters of the gospels are set here. Outstanding miracles of healing were performed in Capernaum, including that of the man with a shriveled hand (Mk 3:1-6), the centurion’s servant (Mt 8:5-13), a demonized man (Mk 1:21-89), and a paralytic (Mk 2:1-12). Regarding the latter story, the photograph shows how easy it would have been for the paralytic’s four friends to escape the crowds by climbing over the rooftops of the abutting houses, digging through the light thatch, and lowering their friend directly into the courtyard of the house where Jesus was teaching.

Note that all these miracles contain important elements beyond the miracle itself. In the case of the paralytic, Jesus made a public demonstration of forgiving his sins, thus drawing the accusation of blasphemy from the teachers of the law. Similarly, the man with a shriveled hand was healed on the sabbath, again rousing his opponents’ ire. As for the demonized man, when the demon testified loudly to knowing who Jesus was—“the Holy One of God!”—Jesus told him sternly to be quiet. In each case, it seems, the real point was not the miracle, amazing though it was, but the explosive secret of Jesus’ true identity. As the Pharisees complained, “Who can forgive sins but God alone?” (Mk 2:7)

In the end, despite such tremendous works of power, and despite the amazing blessing of having the Son of God living in their midst, Capernaum rejected its famous rabbi, compelling Jesus in turn to reject the town: “And you, Capernaum, will you be lifted up to the skies? No, you will go down to the depths…. It will be more bearable for Sodom on the day of judgment than for you” (Mt 11:23-4).

Next Week:  The Capernaum Synagogue