This week, on August 7, Karen and I celebrate 38 years of marriage. And this year we have something additional to toast, because at long last my book The Mystery of Marriage has been issued as an audiobook. Moreover the reader is one of the best in the business, Simon Vance, who does an excellent job.

You can hear a sample of the new audiobook on the Amazon webpage, where Simon reads an excerpt from the Preface I wrote for the book’s 20th anniversary edition in 2005. And below is reproduced the opening of a new chapter on “Oneness” that I wrote for that same edition. 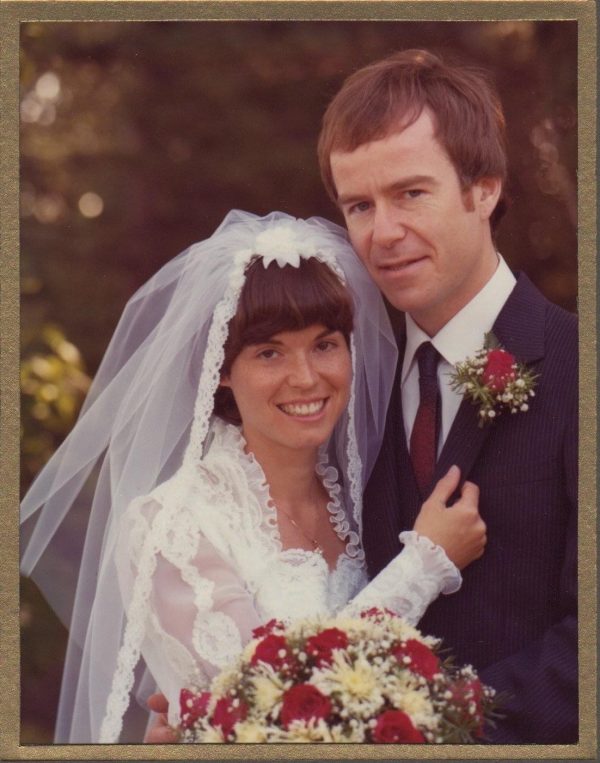 This book could easily have been titled A Funny Thing Happened on the Way to the Monastery. It’s the thoughts of a would-be monk who stumbled into marriage and discovered, in the exquisite, excruciating wine press of conjugal love, that no spirituality is more profound, no Christian discipline more exacting, no monastic life more fulfilling than the loving arms of a wife.

At a time when I thought I’d given up on women forever, I met Karen and fell in love. Confused, panicked, desperate, I sought the counsel of a Jesuit priest with whom I’d studied Classical Literature in university. As a celibate himself, I felt sure he’d give me the advice I sought: “Flee temptation, my son, and get thee to a monastery!” Instead this wise, kindly old man, peering at me mistily over his glasses, asked me one simple question: “Do you love her?”

I should have known right then that I was caught. But stubborn dolt that I was, I failed to see the point. Not that the question was difficult. Oh no! I was able to answer without hesitation. To my own shame, I quote verbatim my response: “Of course I love her. But what does that have to do with it?”

How could I not have known that love has everything to do with it? For the Christian, especially, love rules. Love is king, for the King Himself is love. Through a gift of love God had already directed me. How often does it happen in the Christian life that God has already led, already shone the light, while frantically we seek His counsel? This is because we’re afraid to follow. We’re afraid of love, because we know that to be love’s disciple is to abandon all else.

So, armed with obtuse trepidation, back I went to Karen and told her we had to break up. She cried, I relented, and six months later we were married.

Did marriage resolve my desperate dilemma? No. It took probably two more years of doubts, misgivings, second guesses, and cold sweats before I finally threw in the towel and accepted that I was good and thoroughly married and there’d be no running off to any monastery for me. I’d made my bed––or rather, Karen and I and the Lord together had made it––and now it was time to lie down in peace. Which I’ve done, mostly, ever since.

This book, however, did not emerge from the peaceful resolution of my conflict, but rather from the midst of the fire. Most of my ideas were written down during the tumultuous period of our engagement and assembled into a book a year or so later. If I was going to be married, I had to have a good reason for it, a rationale. I already had a theology for celibacy; now I needed a theology for marriage. This didn’t come easily; I had to hammer it out. I wanted to live a heroic life and I didn’t think heroes got married. God changed my mind. He converted me from viewing marriage as a trap to embracing it as a high and holy calling. In the process I learned that this is precisely the path of Christian discipleship––coming to understand that the ordinary way is really the glorious way, the lowly is truly the lofty.

Get the new audiobook edition of The Mystery of Marriage.

Next Post:  And His Train Filled the Temple: A Parable Inspired by J.I. Packer

Posted in Stories and Excerpts and tagged Audiobook, Oneness, Simon Vance, The Mystery of Marriage.