This week I continue my memorial celebration of the life of J.I. Packer, who died last month at 93. As the son of a railway clerk, Jim retained a lifelong fascination for locomotives, saying that trains evoked his “longing for the transcendent.”

Jim once told a story about a fellow theologian, William Barclay, who actually wrote books about trains under a pseudonym. In honor of both Packer and Barclay I wrote the following fictional short story, which was published in my 1989 collection of parables, The Furniture of Heaven. Here is “And His Train Filled the Temple.” 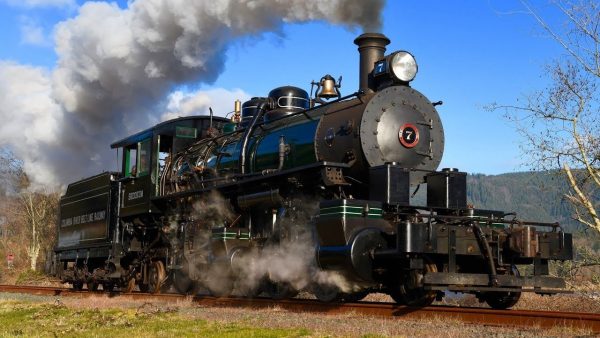 A celebrated popular theologian had three desks in his study. At one desk he worked from Monday to Wednesday writing the concise and lucid Bible commentaries for which he had become so well known. This desk was the largest of the three, a massive old thing of oak situated in a bay window with a lovely view of the English countryside. It was a most fitting place for reflecting upon eternal truths, and for putting those truths into a plain man’s language.

But the writer had a second passion besides theology, and that was trains. One entire wall of his study was covered with photographs of famous locomotives, and against this wall was positioned his second desk, where every Thursday and Friday the theologian donned an engineer’s cap (literally) and produced a scholarly account of English railroading, a history of the caboose, an encyclopedia of train lore, and several other volumes, all of which he published under a pseudonym.

It was the third desk in this author’s study, however, which was in some ways the most curious one, for it was a wooden school desk, small and homely, of the old sort with a hole for an ink bottle in one corner and the surfaces deeply engraved with generations of graffiti. Here every Saturday the theologian lowered his ample frame carefully into the tiny wooden chair and, with knees bunched up against the bottom of the desk, wrote children’s stories. The cramped position helped him, he always said, to think like a child—something admittedly not always easy for a celebrated theologian.

With his three desks, then, and his three passionate interests, and his three distinct reputations, the theologian was, as it were, three different people rolled into one—a kind of mirror of the great Trinitarian mystery he so loved to write about. There were many readers, in fact, who knew the author only by his train books, and had no idea that he also wrote theology. Many more were familiar with his theology but had never read his children’s stories. And so on.

For the writer himself, however, the boundaries between these three identities and tasks were not always so clear-cut. The Bible commentaries, for example, were filled with illustrations and stories so simple that a child could understand them. And when mulling over a problem in theology, it was not unusual for the writer to step outside and take a stroll down to the railroad tracks, about a mile from his home. Sometimes while he was there a train would go rushing by, and then he would stand as close to it as possible—just like any daredevil young lad—letting the noise and the wind and the rumble course through his body from head to toe. For often enough, in the strange and sudden vacuum of stillness that always hung like a struck gong in the wake of the caboose, the theologian would hear answers to deep questions.

By the same token, the very act of creating a children’s story might have the effect of raising these same questions all over again, yet this time in such a way that the questions themselves would seem answer enough.

So the boundaries of the writer’s work tended to get blurred—just as standing with one’s nose in the wind of a speeding train could have the effect of blending ninety-nine multi-coloured boxcars into a single entity—and that was why he found it helpful to use three separate desks for keeping track of his various projects. After three days of expository theology, he was quite happy to get back to his trains. And after two days of trains, a Saturday of stories, and a sabbath of rest, by Monday morning he was ready once again to tackle his commentaries.

Each desk was piled high with the accumulated manuscript pages of its own work-in-progress. And each was equipped with its peculiar set of tools: for the children’s books, a pencil and scribbler; for the trains, an old black Underwood; and for the more rarefied work of theologizing, a computer with the latest biblical-reference software. 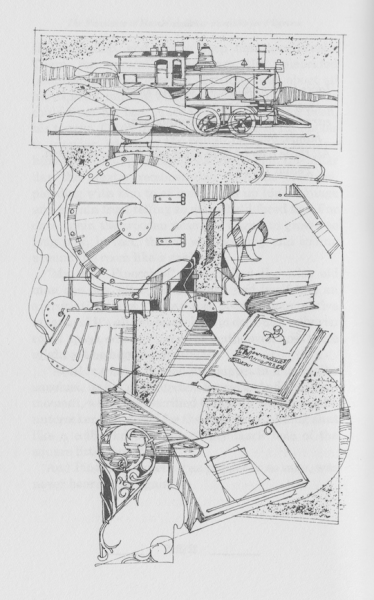 Original illustration by Joe DeVelasco from The Furniture of Heaven

Thus the week would go by—sentence by sentence, desk by desk, book by book. It was a well-ordered, literary sort of life.

Late in his career, however, one Saturday in spring, an unusual occurrence befell the theologian—something which at first appeared to throw his carefully-disciplined existence into total chaos. Seated at his little school desk that morning, knees bunched, trying to think like a child but finding himself preoccupied instead with a problem in theology, he found himself at the same time perking up his ears to listen nostalgically to his favourite sound in the world: the distant, mournfully-ecstatic wail of a train whistle. It was a balmy, daydreamy sort of day and the casement windows of the study were thrown wide open so that the beautiful, wild sound came drifting into the room and tugged at something inexpressibly deep in the theologian’s soul. What was it about this sound? Somehow it seemed to sum up all questions, all answers, all the earth’s yearning and heaven’s reply. It was as though the archangel Michael were a black jazz musician playing, not a trumpet, but a saxophone! The single sustained note came rhapsodically out of the far distance, and disappeared into the distance again. Heard for a few passionate moments, then gone.

And now, just at that mystical point when the sound itself was all but lost (so that one could not say with certainty whether it still could be heard, or whether what was heard was but the memory of it, or perhaps only the sound of the distance itself), just then, out of nowhere, a wind blew up. First a few fingers of breeze poked into the study and rustled about, like an unseen hand ruffling a child’s hair. Then came an abrupt gust that picked up a sheaf of computer paper from the big oak desk and sent its sheets flapping all about the room like a startled flock of papery-winged pigeons.

Reluctantly, the theologian got up to close the big front windows and set about sorting through the mess. But immediately there came another gust through a side window, this time a stronger one that swept across the train desk lifting an entire book manuscript up into the air and blowing it around like a cloud of leaves. And all at once there was a regular gale in progress, right there in the study, so that it was all the elderly author could do to lean against the force of this unearthly wind and struggle to get his windows closed on all three walls.

Yet even when he accomplished this, somehow the violent wind kept blowing, eerily and unabated, just as though it were trapped now within the house. Outside all seemed calm, but inside raged a howling storm of paper, white and blinding as a blizzard. Books were dumped from their shelves and pages torn loose, the precious pictures of locomotives came rattling off the far wall, and even the three filing cabinets toppled over and spilled their contents into the whirlwind. All the owner’s frantic efforts to restore order were in vain, and in utter helplessness he looked on as train stories, children’s writing, and theology all got jumbled together and strewn every which way. Finally there was nothing he could do but lie down flat on the floor with hands over head to protect himself from being sliced to ribbons by his own knife-edged creations.

It was then, out of the corner of an eye, that he saw the strangest sight of all: for not only were his papers being blown about but the writing itself, the very print upon the pages! Individual words were lifting from their moorings and, still intact, were bouncing all over the room like black hailstones. In the midst of this tumult the writer lost consciousness, sinking away into a dream-filled sleep in which he saw himself wandering knee-deep through an endless slough of alphabet soup, a pepper-and-salt wilderness of uninterpretable, glossolalic print…

When he awoke, it was Sunday morning and the room was calm once more. Not only that, but all the chaos of the day before had been miraculously swept away, whisked clean, and now bright sunlight streamed in through the tall windows upon a perfectly tranquil and well-ordered scene. True, the familiar books and papers and pictures and furniture, including the three beloved desks, had vanished, leaving in their place only a single plain table in the middle of the room, like a simple altar. And upon this altar, bathed richly in the sunlight, lay a large and beautiful book.

At first sight, the theologian assumed this book to be a Bible, as it was a most impressive volume, sumptuously bound in gold. Yet as he rose to his feet and drew near to investigate, he was surprised to see his own name embossed on the jewel-studded cover. Nothing else: only his name. Strangely, this detail reminded him of the four Gospels: Matthew, Mark, Luke, John. And the great prophets: Isaiah, Jeremiah, Ezekiel.

What better title for a book, whispered a voice inside him, than simply the name of its author? Indeed as he opened the golden tome and began to leaf through it, he saw with astonishment that it did contain all his very own writing! Everywhere he turned familiar thoughts and phrases leapt out—though how exactly he recognized it all he could scarcely say, as everything seemed slightly askew, altered somehow, transformed. Sentences and whole paragraphs of theology had been lifted out and inserted into other works; obscure information on railroading had somehow found its way into the children’s stories; and passages from the latter had been interfiled with the Bible commentaries. Nevertheless, it was all there—all the scriptural expositions and the stories and the train lore, every last word he had ever written. And while none of it was in quite the same order as his original, the author was dumbfounded to discover that far from appearing a hopeless jumble, this new revised version seemed to express things exactly as he had always longed to express them. It was just what he had wanted to say all along!

With tears of joy the truth came home to him: that his entires life’s work had been edited, polished, transfigured, and seamlessly amalgamated into a single magnificent magnum opus. And so, falling on his knees in wonder, he turned back to page one and commenced to read more carefully, cherishing each and every word of the glorious new style: 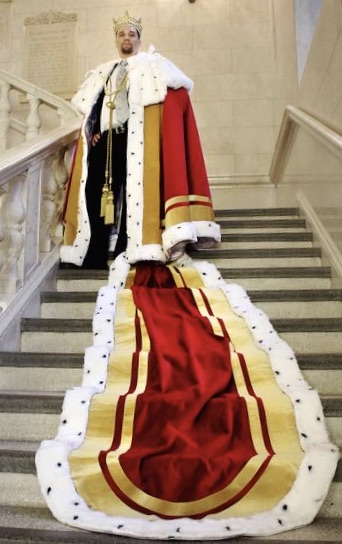 “Once upon an eternity,” read the opening sentence, “I saw the Lord, and His train filled the temple…”

In that abyss I saw how love held bound
Into one volume all the leaves whose flight
Is scattered through the universe around.
~Dante, Paradiso xxxiii, 85-7

“And His Train Filled the Temple” is from the book The Furniture of Heaven.