Here in the middle of Lent, as we journey towards Good Friday, I present a two-part series on the subject of betrayal.

I’ve always wondered why Jesus had to be betrayed. Wasn’t it enough for His enemies to nail Him to a cross? But no, first He had to be “handed over” to those enemies by a friend. There had to be an intimate intermediary. As Jesus Himself prophesied repeatedly, “The Son of Man will be betrayed into the hands of sinners.”

Why, I’ve wondered, was the role of Judas so important, indeed indispensable, when the whole ugly business could have been accomplished without him? 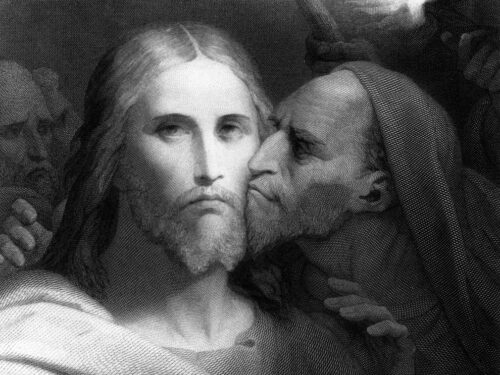 And then came a day when I myself was betrayed. No need to go into details. But what I learned, firsthand, is that perhaps no suffering is greater than that of betrayal by a loved one.

If an enemy were insulting me,
I could endure it;
if a foe were rising against me,
I could hide.
But it is you, a man like myself,
my companion, my close friend,
with whom I once enjoyed sweet fellowship
at the house of God.

Jesus’ death wasn’t only at the hands of people who hated Him. He was betrayed by a friend who loved Him.

Judas, I believe, never stopped loving Jesus, which is why He was so conflicted about his betrayal, why he couldn’t stand to keep the blood money, and why, in the end, the only way he could pay for his crime was to kill himself. Blood for blood.

Of course Judas’ love was twisted. But it was, at bottom, strong and genuine enough to inspire him to follow the Master for three years. And such discipleship could only be motivated by the fact that Jesus loved him first, called him, and loved him to the end.

We don’t know the story of Judas’s calling as a disciple. But somehow his heart was touched when Jesus said, “Follow Me.” Like the other disciples, Judas dropped everything and followed.

Well, maybe not everything. He seems to have clung to his love of money, and to his zealous desire to see Jesus use His power to overthrow the Romans and usher in a political kingdom. But then, the other disciples had their own agendas for the Master. Having an agenda does not necessarily delegitimize love; it may even make it all the more passionate. Only love that begins as deeply genuine can result in stinging betrayal.

The Bible is filled with stories of betrayal, often occurring within families: Abel betrayed by Cain; Joseph betrayed by his brothers; Moses betrayed by Aaron; David betrayed by Absalom. In the New Testament a good deal of the Apostle Paul’s writing is concerned with the pain and outrage of betrayal: by friends who had worked with him; by ‘super’ apostles; by church congregations (especially the Galatians and Corinthians). Significantly, if anyone introduced a foreign element into the pure message of the gospel as preached by Paul, Paul took it as a personal betrayal, just as Moses did when Aaron set up the golden calf. They felt these betrayals personally, not primarily because they themselves were hurt, but because their God was betrayed. All betrayal is ultimately betrayal of the Lord.

If betrayal is the worst of pains, it is also the worst of sins. Dante’s Inferno places betrayers at the very bottom of Hell, in the Circle of Treachery. And Jesus said of Judas, “Woe to that man who betrays the Son of Man! It would be better for him if he had not been born.” (Mt 26:24).

Jesus was betrayed not once but three times: by Judas; by Peter and most of the disciples; and finally (seemingly) by His own Father on the cross: “My God, My God, why have You forsaken Me?” This final cry of dereliction, the most searingly anguished cry in all of scripture, answers the question of why Jesus had to be betrayed: precisely because betrayal is the very worst pain of all. To suffer the torture of betrayal was an essential part of Christ taking the sin and pain of the whole world upon Himself. To be the worst pain, it had to come from a bosom friend: first a human friend, and then His God. “These wounds I received at the house of my friend” (Zech 13:6).

This meditation will continue in the next post, with some thoughts on how to deal with the pain of betrayal.