My last post explored the subject of betrayal, and this time I offer some thoughts on how to deal with this greatest (I believe) of all pains.

My own experience of betrayal came at a time of life when I felt I had worked through most of the emotional garbage from my past, until finally I was free and living a peaceful and happy life. It was then that the boom was lowered, and suddenly I was plunged into all the feelings I foolishly thought I had gotten rid of for good: anger, self-pity, hatred, desire for revenge. My betrayer moved into my mind and heart and started living there rent-free.

How to deal with this ultimate pain? I have some suggestions, learned on the front lines. 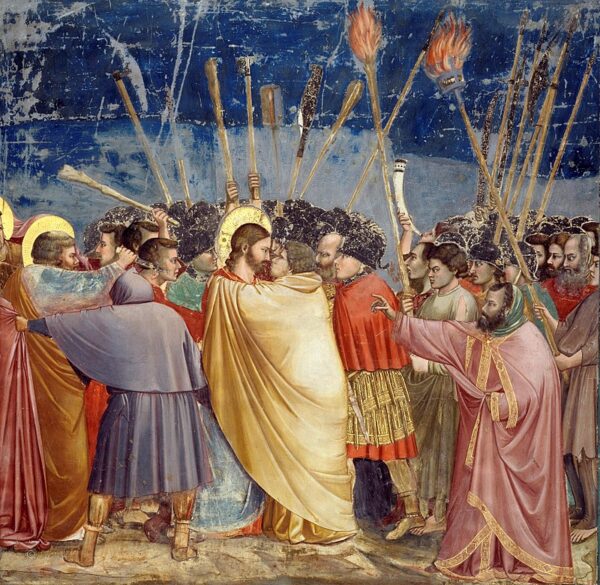 The Kiss of Judas by Giotto

1) Trust the Lord, and look to Him to heal the relational rift, or else, in His own good time, to bring the truth to light and deliver justice. Be prepared for a long wait. Joseph was sold by his brothers into slavery at age 17, rose to power in Egypt at 30, and was finally reconciled to his family at age 39. How many of those years, I wonder, was he gripped with anger and resentment over his betrayal, until finally his trust in God set him free to the point of forgiveness and munificence.

3) Don’t try to bury or escape the pain of betrayal. Accept it, even give thanks for it as a way you can imitate Christ, and put it to work toward your own sanctification. Don’t fall into the trap of thinking that something unnatural has happened to you. Suffering is a part of life, and it is particularly promised to Christians. “Dear friends, do not be surprised at the fiery ordeal that has come on you to test you, as though something strange were happening to you. But rejoice inasmuch as you participate in the sufferings of Christ” (1 Pet 4:12-3). Who do you think you are that you should be priviliged to escape pain? Are you above Jesus, who suffered betrayal for your sake? No, “a servant is not greater than his master” (John 13:16).

4) Get in touch with the fact that you yourself are a betrayer. Did you never betray your parents? Or a brother or sister or friend? And what about God? Betrayal is precisely the pain which God has suffered from all of us, ever since our ancestors turned their backs on Him in Eden: a betrayal that is ongoing and that is represented quintessentially in the cross.

5) Betrayal is particularly a problem in families. Parents invest so much in trying to build good relationships with their children, and vice versa. When all this turns sour, that sourness can poison our hearts. But again, this is nothing unusual. As Jesus said, “They will be divided, father against son and son against father, mother against daughter and daughter against mother” (Luke 12:53). But remember that Jesus also said, “Love your enemies.” Whether our families are strong and healthy, or sick and divided, the strategy for either situation is the same: love.

6) Another setting in which betrayal is particularly painful is church—again because this a place where deep personal bonds may be formed. In 2 Corinthians 6:4-5 Paul lists some of his greatest hardships: “beatings, imprisonments, riots, sleepless nights, shipwreck, hunger.” But as Jane Williams writes, “He tells about these sufferings almost as though they are external and not very relevant. What really hurts him is the feeling that the Corinthians have separated themselves from him, that he no longer has their affection.” When he goes on in this letter to write one of the most famous chapters in the Bible, he is probably preaching first to himself: “Love is patient, love is kind, it always trusts, always hopes, always perseveres …” (1 Cor 13). What Paul most needed in dealing with a difficult church was that virtue without which all the faith in the world is worthless.

For all of us, the only answer to betrayal is love. You know your betrayer intimately; you know who he or she really is at heart. Focus on that inner reality and love that person, the true one, from your own heart. How did Jesus handle betrayal? Not by withdrawing into bitterness, but by becoming even more vulnerable: “On the night He was betrayed, He took bread, gave thanks, and broke it and said, ‘This is My body, given for you’” (1 Cor 11:23). What gift may emerge from your experience of betrayal?

Knowing Judas would betray Him, Jesus still chose him as a disciple, loved him, and even put him in charge of the money. How dumb was that? But has He not done as much, and more, for you? Therefore “Love your enemies, do good to those who hate you, bless those who curse you, pray for those who mistreat you” (Luke 6:27-8).

“Blessed are the peacemakers, for they shall be called the children of God” (Mt 5:9).