My house overlooks the beautiful Muskoka River. Since moving here three years ago, I’ve made a practice in my morning quiet time of gazing out the window (or in good weather, sitting outside) to enjoy the beauties of nature, and waiting for—and expecting—something unusual to strike my attention.

Every day without fail, in this scene that has become oh-so-familiar to me, I eventually see something new: either something that has never been there before, or else something that was there all along but I’ve never noticed it. In a similar fashion the monk David Steindl-Rast writes, “Before I turn off the light in the evening, I jot down one thing for which I have never before been grateful. I have done this for years, and the supply still seems inexhaustible.” 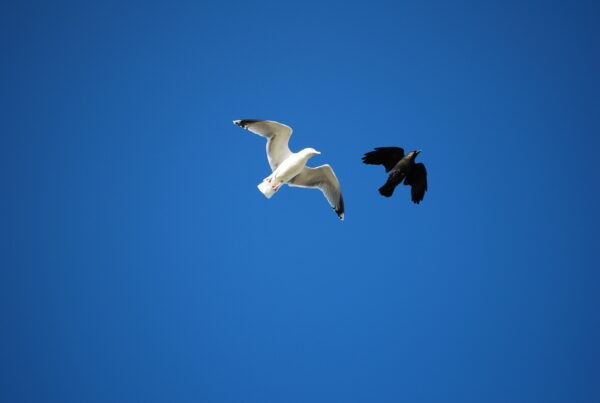 Ever seen this before?

One day last August I was out for a bike ride when I saw something I’d never seen before: three small boys jumping into the river from the roof of a boathouse. As I live in a land of boathouses, to see kids jumping from the roof is not uncommon. But three all at once was impressive, and right then and there I launched a new experiment, a variation on my morning custom: to try to notice one thing each day that I had never seen before.

By the next day I had forgotten all about this resolution. But then the mail arrived, and in it was a new book from a friend: a gorgeously-produced collection of paintings of the life of Jesus, with accompanying scriptures. A beautiful gift, and definitely something I’d never seen before. Aha! I thought. This experiment wasn’t just my own idea, but God’s.

Over the course of the next month, I cannot say that I saw many spectacular or amazing things, but every day brought at least one sight or experience that fit the category of being, to me, brand new. For example, perhaps you’ve seen a Waboba Ball in action, but I never had. Watching how it skips multiple times over the water was so delightful that I went right out and bought one. Another day they cut down a tree along our riverbank, and for the first time this opened up a beautiful view of the waterfall across the bay.

For a while my experiement began to seem like “The Twelve Days of Christmas,” as one day I saw twelve Corvettes all in a row, the next day ten wild turkeys, then a train with seven engines, then three otters frolicking in the bay, and then two pileated woodpeckers.

If you’re thinking of trying this experiment yourself, be warned that the results may not always be pleasant. Among my new experiences, I’ve sunk up to my calves in gooey black mud, and I’ve driven over a metal stepladder on the highway at 100 km/hr (not my fault). I don’t recommend either of these.

I do recommend floating on your back in the river, as I did one August night, and gazing up at the star Vega, brightest in the summer sky, directly overhead. Another night we had such a humongous storm that I truly had never heard such thrillingly long peels of thunder, like freight trains rumbling clear across the sky.

Which reminds me, if you’ll allow a digression, of something that happened three years ago. The waterfall I mentioned has a railway bridge across it, and on the night of a big storm I was enjoying the roar of the waterfall accompanied by peels of thunder, when suddenly I thought: Wouldn’t it be great if a train went across the bridge right now? Sure enough, a train came! Quickly I turned on a digital recorder and preserved the miracle of four of my favorite sounds all at once: rain, train, thunder, and waterfall. (You can sample this recording at the end of this blog. You have to listen carefully for the train.)

I could go on listing the new things I saw during my thirty-day experiment: a folding canoe; a crow and a seagull flying together like buddies; a little girl catching golden leaves as they fell from a tree; a hummingbird, a goldfinch, and a monarch butterfly all at once in a single cubic foot of air … Anyhow, you get the idea. This whole project has made me realize that, if I keep my eyes open—or even if I don’t—seeing things I’ve never seen before is all too common. It happens every day.

Thank you, God, for creating a world of such fantastic variety!