Years ago my friend John had a life-changing encounter with the book of Habakkuk, an experience he recalls with deep gratitude to this day. At a point in his life when he was full of confusion and distress, in one great insight he moved from doubting God to praising Him.

Four decades ago, John was angry with God, and what he was angry about will surprise you: climate change. Long before climate change became a buzz word, John was upset about the prospect of rising seas, melting ice, vanishing species, and so on. Never mind that these problems were not God’s fault but are humanly caused: John was mad at God for not intervening. Why didn’t He step in and do something?

And then John read the Old Testament book of Habakkuk, and it changed his life. He was a new Christian and his faith was in a highly formative stage. Not only did the prophet Habakkuk dissolve John’s anger at God, but he has never been angry at God since. Doubting, questioning, perplexed—but never angry.

Let’s have a look at this little Old Testament book and see how it worked its magic on one distressed heart. While the book may seem obscure, in fact its message and structure are easily grasped and it contains some of the most beautiful verses in the Bible.

One reason Habakkuk is easy to follow is that, like Jonah, it is a short story, a narrative, and moreover, a personal narrative. It is a book in which the writer is telling his own story. There are three chapters, and each chapter corresponds (roughly) to a simple plot point: 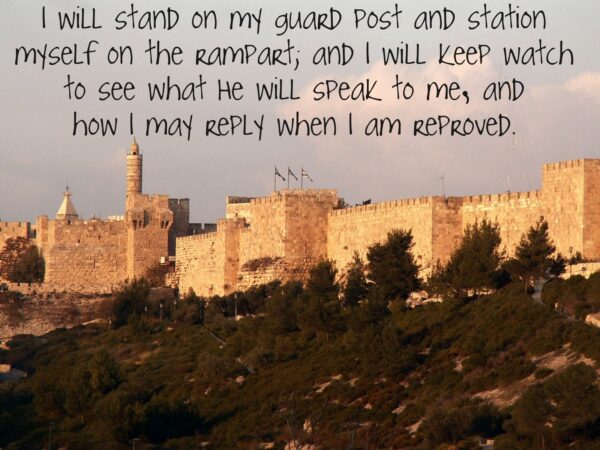 Chapter 2: Habakkuk resolves to go up “on the ramparts” (the wall of the city) to wait for God’s answer. How long he waited we don’t know, but the very next verse declares, “Then the Lord replied,” and His reply is basically, “Don’t worry, I will punish the wicked.”

Chapter 3: In a prayer, Habakkuk celebrates the power and glory of God and commits himself to wait in faith on the Lord.

The second two chapters contain some of the finest verses in the Bible. Most famous, probably, is 2:4, “The righteous will live by faith”—a statement so admired by the New Testament writers that they quote it no less than three times (Rom 1:17, Gal 3:11, Heb 10:38) as a concise statement of the heart of the gospel.

“The earth will be filled with the knowledge of the glory of the Lord, as the waters cover the sea” (2:14).

Finally, there is Habakkuk’s great and majestic conclusion in 3:17-19, which I’ll leave you to read for yourself. What a journey the prophet goes on in this short book! By the end, not only is he fully satisfied and no longer complaining, but he resolves to rejoice in God alone no matter what.

In this time of climate disaster, Covid, terrorism, wars, on and on, how about we each go up on the ramparts to see what God has to say about it all? I suspect His message today is the same as it was to Habakkuk: “The righteous will live by faith.”