Zion’s stones are dear to Your servants; her very dust moves them to pity. –Ps 102:14

Every year about a thousand letters arrive at the Jerusalem Post Office addressed simply to “God.” The whole world knows where He lives. 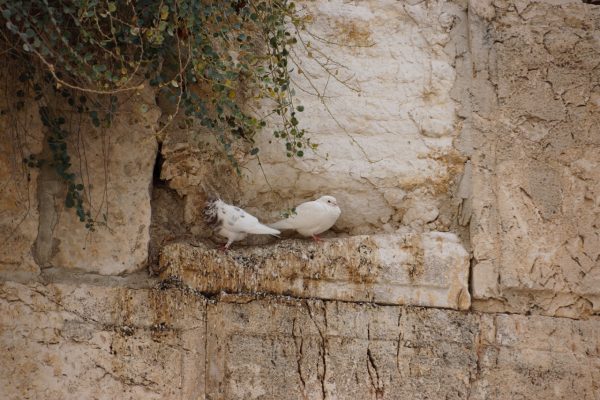 Doves on the Western Wall

I certainly sensed this when I was in Jerusalem. At times as I walked those cobbled streets, every detail of this mesmerizing city seemed vibrantly significant. It was as if a newly-discovered book of the Bible had been opened to me.

At the same time, thanks to Jesus Christ, God does not live only in Jerusalem.

My father’s Aunt Trudy collected stones from all over the world. Each stone was kept in a small clear plastic box labeled according to place of origin. Her collection was geographical, not geological; she couldn’t care less whether a stone was garnet or granite, schist or gneiss. But a stone from the base of Victoria Falls, or from the banks of the Amazon, or from Antarctica—that was a prize.

I too collect stones, but haphazardly, and only from places I’ve visited myself. Aunt Trudy collected methodically; like a philatelist in search of penny blacks, she had certain places she was trying to “get.” Not a traveler herself, she would ask her friends to bring back stones from their exotic holidays. One time, hearing that a friend would be touring the Rocky Mountains, Trudy asked her to please collect a stone from the shores of Lake Louise.

Trudy’s friend had a wonderful time in the Rockies, and Lake Louise was beautiful. But it wasn’t until she returned home that she remembered about the stone. On the way to Trudy’s house for dinner, she picked up a stone from Trudy’s own driveway and presented it to her as the precious souvenir from Lake Louise. Trudy was delighted and the stone, duly labeled, assumed a prominent place in her collection.

Only years later did Aunt Trudy learn the truth from her friend. By then she was able to have a good laugh about it, and perhaps she sensed a moral in the story as well. What if the great treasures we seek are not thousands of miles away but right under our noses, free for the taking?

In this book, most of the stones I’ve dealt with are enshrined at famous holy sites. But the few random stones I picked up at the Sea of Galilee, at the Jordan River, at the Mount of Olives—might not any one of them potentially be a stone that Jesus touched? And let’s not stop there. What if we don’t have to go to the Holy Land at all to see stones touched by Jesus? What about all the rocks and stones in the whole world? Has not each one been touched and formed by the hand of the Creator, who worked all His marvels through Christ? Is not each one an amazing little sculpture, a work of highest art conceived and fashioned by the divine Maker? Don’t they all bear the stamp of handmadeness, of one-of-a-kindness, and so give glory to God? Cannot anyone stoop down in his or her driveway and pick up a priceless work by the greatest of all artists? Or look out a window at one’s own little patch of sky and see eternity? Or stroll into any garden and be once again in the Garden of Eden?

God is with us.