Nearby stood six stone water jars, the kind used by the Jews for ceremonial washing, each holding from 20 to 30 gallons. –Jn 2:6

We know this because so many ancient stone vessels have been found in Israel, many of them roughly fashioned, but the best ones turned on a lathe and smoothed, polished, and decorated. The practical reason for all this stoneware stems from the Jewish laws of ritual purity. Stone vessels could easily be cleaned with water, whereas if an earthenware pot became ritually unclean it had to be broken. Hence the high incidence of stone vessels is peculiar to ancient Israelite culture, as non-Jews normally didn’t bother with this costly and cumbersome material when ceramics were much more convenient. 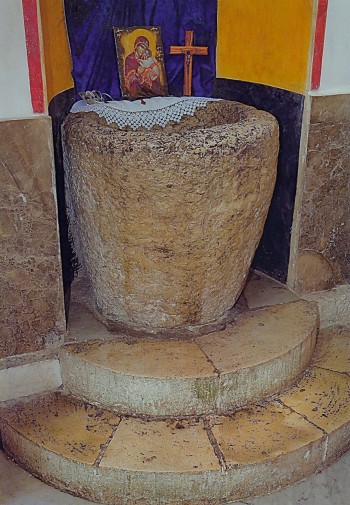 The second chapter of John records Jesus’ first miracle, in which He turned the water in six large stone jars into wine. To hold “twenty to thirty gallons,” such jars would need to be about three feet tall and be cut from a single block of stone weighing at least half a ton. Quite aside from the miracle itself, the sheer quantity of new wine created is astounding—equivalent to about a thousand bottles. Here is someone who does things in a big way! Moreover, this was no ordinary wine, for as the host remarked, “You have saved the best till now” (v 10). But neither was it ordinary water: Since its purpose was “for ceremonial washing” (v 6), the miraculous transmutation suggests the old order passing away, law metamorphosing to gospel.

If the number six represents the days of creation, then Jesus’ miracle constituted a wonderful blessing of fertility on this marriage— not only on the couple but on their family for generations to come, a tribe of perhaps hundreds, thousands, even millions of people. More than a show of power, this was a blessing conferred upon a relationship—indeed upon the central relationship of all, the one that best represents the covenant between the Lord and His people.

When a young woman flashes her new engagement ring, admirers are apt to exclaim, “What a rock!” As the consummate rock, the diamond is a supreme symbol of the stability and permanence intended for marriage. But Jesus came up with an even better symbol: six enormous rocks, hollowed out to contain a representation of the blood that would drown all our sins and sorrows forever.

The miracle at Cana is John’s version of the annunciation. In Luke’s version the angel Gabriel announces to Mary that she will bear the Messiah. In John’s version Mary announces this secret to the world. For three decades she has “treasured up all these things and pondered them in her heart” (Lk 2:19), but now she turns loose and as much as shouts, “Look! My son is the Messiah!” For she, more than Jesus, is the real protagonist here, instigating the miracle by saying pointedly, “They have no more wine.” Jesus’ response registers reluctance and even shock: “Dear woman, why do you involve Me? My time has not yet come” (Jn 2:3-4). Unfazed, Mary simply instructs a servant, “Do whatever He tells you”—a sentence that in John’s annunciation parallels her famous fiat in Luke’s: “May it be done to me as you have said” (2:38).

How interesting that in both these annunciations the kingdom of God moves forward only with human aid. At Cana Mary launched her son’s ministry, as He “revealed His glory, and His disciples put their faith in Him” (2:11). For this quiet, reserved woman to take such strong action, she must have been under the unction of the Holy Spirit, echoing the time thirty years before when she proclaimed in the glorious Magnificat, “He performs mighty deeds with his arm! … He fills the hungry with good things!” (Lk 2:51-3)

Next Week:  A Street in Bethsaida