When Jesus rose early on the first day of the week, He appeared first to Mary Magdalene, out of whom He had driven seven demons. –Mk 16:9

In Jesus’ day the city of Magdala was located about five miles south of Capernaum on the northwest shore of the Sea of Galilee. With a population of 40,000, it was the principal city on the lake until the founding of Tiberias in 19 AD.

In the summer of 2009 excavations had just begun for a new hotel at this ancient site, when a surprise turned up. Shovels struck stone, and before anyone knew it they were looking at the remains of an ancient synagogue. This turned out to be the first-century synagogue of Magdala, one of only seven synagogues that have survived from this era, and the only one unearthed in Galilee.

It was a spectacular find. The project initiator, Father Juan Solana, commented, “In a moment of prayer in this place, I reflected that the last time the faithful had gathered here, around 70 AD, most of them had been witnesses of the life of our Lord.” Indeed both Jews and the earliest Judeo-Christians would have worshipped together in this building. 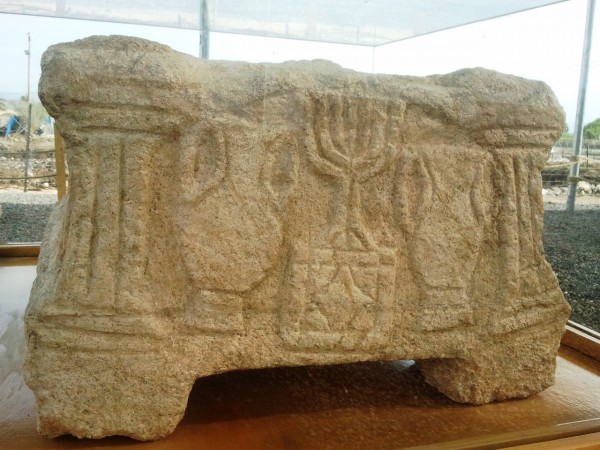 These ruins held another equally stunning surprise: a four-legged, coffee-table-sized block that became known as the Magdala Stone. Intricately decorated on top and on all four sides, it is believed to have been the synagogue’s ‘altar,’ the stone on which the Torah was placed for public reading. Holes in the top probably held supports for a wooden table on which the large scrolls would have rested. Nothing else like this has ever been found. For one thing, it’s the first Galilean relief carving from before 70 AD. But more importantly, one of its carved panels, depicting a seven-branched menorah flanked by two large stone jars, is the oldest figure of a menorah sculpted in stone ever discovered. Almost certainly the person who carved it had seen the great golden candelabrum in Jerusalem, prompting a spokesperson for the Israel Antiquities to state, “The Magdala Stone is the greatest discovery ever made relating to the Second Temple.”

The stone also suggests a link to one of the most prominent women in the New Testament, Mary Magdalene. This was her home town, and she may have worshiped in this synagogue—that is, if she worshiped at all before Jesus drove seven demons out of her. Possibly that electrifying event took place in or near this synagogue, for Jesus may well have visited here. We know that He “went to the vicinity of Magadan” (Mt 15:39) which may have been the same place. Equally possible is that Mary joined the thousands of others who flocked to hear Jesus in a more remote setting. From Magdala it was only an hour’s walk to the Mount of Beatitudes.

Mary became one of the women who followed Jesus and ministered to His roving band “out of their own means” (Lk 8:3). She must have been wealthy, and she was called Magdalene not only to distinguish her from possibly six other Mary’s mentioned in the New Testament, but perhaps also in reference to a home city large enough to accomodate a lifestyle attractive to seven devils. Little did those fiends know that their host was to become so utterly besotted with the Son of God that she would stand transfixed before His crucifixion, follow His body to the grave, and through sheer devotion be the first person to see Him on Resurrection Morning. Taking Him at first for the gardener, the moment He spoke her name she collapsed and “clasped His feet and worshiped Him” (Mt 28:9).

Is there any more dramatic meeting in all of scripture? Not only was Mary Magdalene an apostle in her own right, but because of what happened next—how she rushed to the other disciples declaring, “I have seen the Lord!” (Jn 20:18)—Augustine rightly calls her the “Apostle to the Apostles.”