A new book by a favorite writer who died 25 years ago is a great occasion. Flying, Falling, Catching: An Unlikely Story of Finding Freedom is Henri Nouwen’s account of a great passion he developed, in the final years of his life, for the flying trapeze. Who knew? 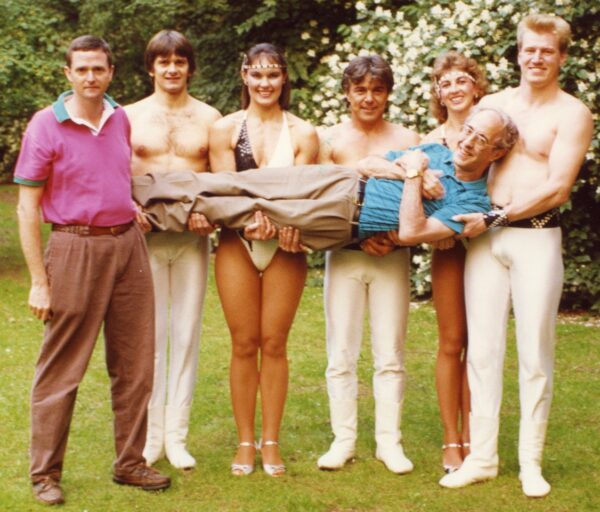 Henri Nouwen with the Flying Rodleighs

Nouwen spent hours, days, and weeks with a travelling trapeze troupe known as the Flying Rodleighs, observing, asking questions, and keeping notes the whole time, with a view to writing a book.

Sadly, Nouwen never got to finish this book, as death intervened. But another writer who knew him well, Carolyn Whitney-Brown, has taken Nouwen’s notes and woven them into a beautiful, compelling, almost novel-like story. A good chunk of the book is Nouwen’s own words, in italics, to which Whitney-Brown has added a linking narrative. The result is a wonderfully absorbing story that enchanted me for three reasons.

First, it’s about writing: Nouwen wanted to write a different kind of book than he’d ever written before—something that today we’d call creative nonfiction. But somehow he couldn’t move forward with the project. It’s fascinating to watch his growth in learning the techniques of this new genre.

Second, this is about the last five years of Nouwen’s life, and interwoven through the story of the Flying Rodleighs is the equally dramatic account of the heart attack that eventually ended the author’s life. This is about a man hurling himself into life, even as he is dying.

Thirdly, here’s a man in his sixties who is still totally committed to following his heart. Without knowing quite why, suddenly he is entranced with the trapeze. After seeing the Flying Rodleighs a couple of times, Nouwen finally plucks up his courage and decides he must meet them. He speaks to one of the troupe, who invites him backstage after the show. But at that very performance one of the fliers, Karlene, falls from the trapeze. Here is Henri’s account:

I was completely captivated by the dazzling acrobatics, but this time I felt a strange fear. Having spoken with Karlene and knowing that I would meet them all within a few minutes, I had the strange sensation of worrying about their well-being. I hope all goes well. I hope they won’t make any mistakes, I kept thinking. Then it happened. As Karlene flew down from the top of the tent to be caught by her catcher, I saw that something had gone wrong. My body tensed up as I saw Karlene missing the catcher’s hands and plunging down into the net. The net threw her body back up until it fell again and came to rest. The audience gasped but quickly relaxed when it saw Karlene straighten up, jump from the net, walk to the rope ladder, and climb back up to continue the show.

After that I could hardly watch anymore. I knew that the woman I had met for a few seconds at the concession stand was all right, but I was suddenly confronted with the other side of this air-ballet, not simply the dangers of physical harm, but the experience of failure, shame, guilt, frustration, and anger.

Despite this setback, Henri carries through with his desire to meet the trapeze troupe, and is totally smitten with them. From that moment he makes a commitment:

As long as the Flying Rodleighs were in town, I was going to see them every chance I had. I knew I had found something that was going to take me a big step closer to the understanding of the mystery of being alive!

Only much later in the story does Henri begin to draw comparisons between the circus and the church:

Aren’t they both trying to lift up the human spirit and help people look beyond the boundaries of their daily lives? And aren’t they both, at the same time, in constant peril of becoming places for lifeless routines that have lost their vitality and transcending power?

There is no reason to idealize the circus. Much that goes on there is quite unspectacular, inside as well as outside the tent. Nor is there any reason to romanticize the church. Much that goes on there is quite unspiritual. And still, the human heart searches for something larger, something greater than its own pettiness, and everyone who enters the circus or the church is looking for something that reaches out to the stars, or beyond!

Next Post:  The Rich Young Ruler: A Second Look