Over thirty years ago I published a book of parables called The Furniture of Heaven. Since then I’ve written a number of other parables, which some day I’ll gather into a second collection. Here’s one of the new ones.

One Sunday morning I woke up feeling sad and lonely. For a long time I lay in bed with the curtains drawn. I could tell it was sunny, but in the mood I was in, that seemed a good reason not to get up.

There were a lot of things I needed to do this day, but finally I rolled over and grabbed the phone and called my dad. There was interference on the line and his voice sounded distant and unreal.

“Dad,” I began, “you know those blueberry pancakes Mom used to make …?”

“I sure do! Come on over, son, and we’ll have ourselves a feast.” 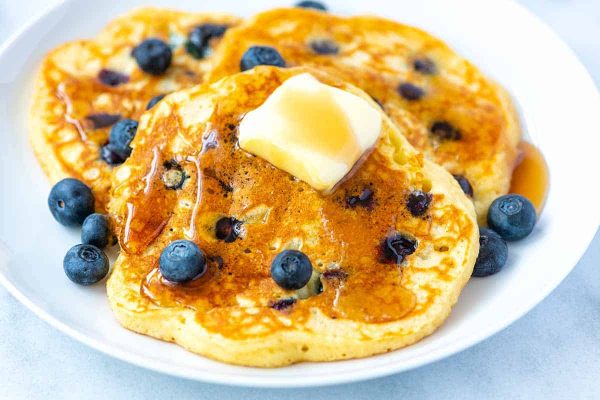 This was just what I needed. Dad knew me in a way no one else did. Just being with him, I felt, would sort me out. In a way, it would be like being with Mom, too.

After she’d passed away, Dad had taken a cooking course. He’d always manned the bar-b-que but now he made quiche, a variety of casseroles, a great peanut soup. Best of all, for me, was Mom’s pancakes.

I found Dad on the sunporch with a cup of coffee, reading the morning paper. Pope Francis was holding a big outdoor mass somewhere today, and he wanted to tell me about it. But seeing my face, he held fire and simply asked, “How are you, son? How was your week?”

Dad’s tone, as always, invited me to disclose as much as I wished, or as little. Today I hesitated, not knowing where to begin. There was something bothering me, something I’d done wrong. Finally I told him all about it. Dad just listened, his hands folded over the newspaper.

When I was done, he remained silent for a space, then said, “Do you remember the Book of Mercy?”

I nodded. Mom had been a high school English teacher, and I’d been in her class the year she had assigned Leonard Cohen’s collection of psalm-poems.

Dad continued, “I recall hearing an interview with Leonard”—he always called favorite writers by their first names—“in which he was asked about his religious beliefs. He paused before answering, then said simply, ‘I believe there is a source of mercy.’”

That was all Dad said. But it was enough. Gazing out over the front yard, I saw sunlight shining so beautifully in our old apple tree. At that moment, it was as if I entered this day for the first time. Life had stopped for me, stuck, and now it moved. I breathed.

Laying the newspaper aside, Dad rose and said, “Those pancakes are calling our names.”

Following him into the kitchen, I watched him don Mom’s blue apron with the Shakespeare quote: Small cheer and great welcome makes a merry feast. The words, and the sight of that old apron, brightened my spirit still more.

As I drew up a stool to the counter, Dad flipped through Mom’s recipe cards until he found the one for blueberry pancakes. Peering at it through his round spectacles, he smiled fondly, as though at a photograph of her. Reaching a jug of milk from the fridge, he put a teaspoon of vinegar into a cup and added the milk to sour it. Then into a bowl went a cup of flour, along with small amounts of baking powder, baking soda, and salt.

I was struck by the fact that so far all of the ingredients were white. Then he added a teaspoon of cinnamon—finally some dark!

“Following these steps,” he said, “reminds me of those classes your mother and I took in ballroom dancing. With cooking, I couldn’t get the hang of it at first—until I heard the music.”

Quietly he began to sing—a classical tune, an old hymn, snatches of popular songs from his youth.

Next  came the blueberries, their color as rich and vibrant as the blood of nature herself. Now we were really getting dark!

“If this were a cooking show,” said Dad, “we’d have ourselves a glass of wine. Would you like one with breakfast?”

I nodded, and from the pantry Dad produced a bottle of Mouton Cadet. Then from the top shelf he brought out the pair of handblown goblets, used only for special occasions.

Next, to a second bowl he added two eggs, two tablespoons of oil, and the cup of soured milk. Then he mixed the wet and the dry ingredients and gently stirred.

As Dad worked, I set the table, opened the wine, and heated a jug of maple syrup in the microwave. Hearing a spattering sound, I turned to see Dad sprinkling a dash of water into the oiled frying pans, testing temperature.

Then came my favorite part: Raising the bowl of mixed ingredients in both hands above his head, my father poured from on high three perfect circles of white, berry-speckled batter into each of the two frying pans. Mom hadn’t done it this way, but Dad liked a dramatic touch.

As the cooking proceeded, Dad’s singing changed to muttering, breathing words I couldn’t hear, as though he was talking to the pancakes. When a slow bubbling signalled time to flip, the undersides came up the beautiful golden color of breakfast.

Heaping the finished cakes on a plate, Dad ceremonially processed to the table and set them before me with a flourish, as if serving a prince.

Then he poured the wine. He had a way of holding the bottle in one hand by its base and pouring from about a foot above the glass. As the purple liquid splashed into the goblets it sounded like a burbling mountain stream. Next, as with the bowl of batter, he raised his goblet high over his head and faced the sunlit window as though offering the first drink to the sun. When he swung back towards me, I too lifted my chalice and we clinked, our wine glowing like stained glass. At that moment, in that kitchen, there seemed to be nothing but light.

We lowered our goblets, Dad sat down, and folding his hands, he said, “Son, you forgot one thing: candles.” Mom always had candles on the table, even in daytime. So I fetched the matches and lit the candles and we watched those tiny flames add even more light to that sun-spangled day.

Then we bowed our heads and my father prayed:

Be present at our table, Lord,
Be here and everywhere adored;
These mercies bless, and grant that we
May feast in Paradise with Thee.

As I listened to Dad’s words with my eyes closed, I pictured the goblet of wine before me, and on my plate, not pancakes—but a small, round, white wafer. 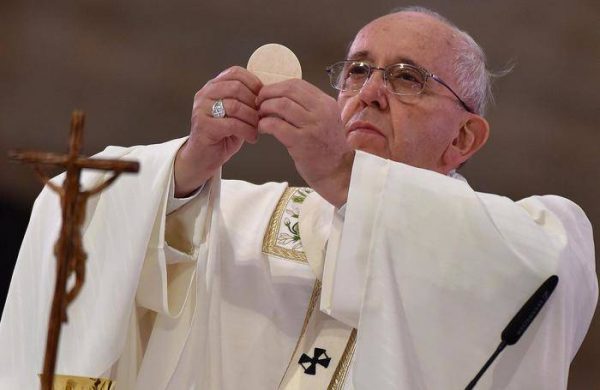 Next Post:  Lazarus the Unmissionary: Staying Home for Jesus

Posted in Stories and Excerpts and tagged Communion, Eucharist, Parables, The Furniture of Heaven.