Who was Jesus’ best friend? My vote goes to Lazarus, the one He raised from the dead. Much is made of John as the “disciple Jesus loved,” but Lazarus was also called “the one You love” (Jn 11:3).

John was a disciple, a learner, a junior, but Lazarus was simply a friend. Not one of those who followed Jesus around, Lazarus stayed at home, and it’s a good thing he did, for his home provided an important base for Jesus on His trips to Jerusalem. 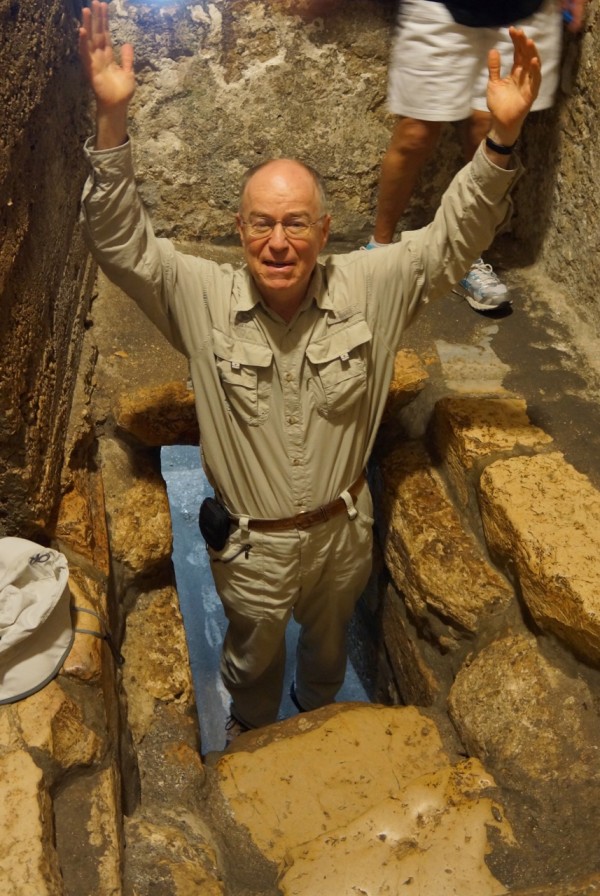 Here’s me rising out of the tomb of Lazarus in Israel. Note that my feet seem to be standing on air! (Photo by Karen Mason, Oct 2012)

Lazarus lived in Bethany, a village about two miles from the city, just across the Mount of Olives. There Jesus could relax, removed from the public eye, and there he could eat good food provided by Martha, and enjoy the company of a family who really loved and understood Him, including Martha’s sister Mary and their brother Lazarus.

Lazarus, to repeat, was not a disciple of Jesus. The Lord never said to him, “Follow me.” Lazarus was a friend, someone Jesus apparently just liked to hang out with. Think about it: While all the world was running after Jesus, the Lord sought out Lazarus as someone He wanted to visit. To another man Jesus said, “Zacchaeus, I’m coming to your house today!” (Luke 19:5) But that was just once. To Lazarus He came over and over.

We have no idea how this friendship began, but I imagine these two as peers about the same age. I say peers because I picture Lazarus as being perfectly comfortable with Jesus, well aware of who He was—the Christ of God—yet at the same time not wowed by His star quality. I think this kind of person must have been extremely rare in Jesus’ life, perhaps utterly unique. There were people close to Christ who were unimpressed with Him—His brothers, for example—and there were droves and droves who fell all over themselves just trying to get near Him.

And then there was Lazarus, a friend Jesus deeply loved (John 11:36), in whose home He felt safe and comfortable, and with whom He could simply be, letting down His hair and talking freely as with no one else. For Lazarus, I believe, not only loved Jesus but liked Him—liked Him simply for Himself as a man: not apart from His Godness, but apart from His charisma, His zinging wit and wisdom, His mighty works. Underneath all this, Jesus was an ordinary man. He must have been, because for thirty years He managed to live below anyone’s radar. When He tried to show off in His home town, people said, “Hey, what gives? Isn’t this the carpenter’s kid? Didn’t we know him in diapers?” (Matthew 13:55-57)

I like to imagine the kind of conversations Jesus might have had with Lazarus. I picture the Lord telling His friend a lot of the same stories we read in the gospels, but very different versions of them. Versions from the inside track. Take the man He healed of leprosy, and then instructed him not to tell anyone about it (Luke 5:14-16). Reading this, I think, “Good luck.”

“Yeah,” says Jesus to Lazarus, “that guy blabbed it all over. I knew he would. But if I’d told him to go out and spread the news, he would have clammed right up. Some people are like that. They do just the opposite of what you say.”

“But didn’t he cause you a lot of trouble, that guy?” says Lazarus.

At that, Jesus breaks into a kind of rueful laugh. “Oh yeah, tell Me about it. In that whole area I can’t go around in public anymore. But what can you do? That’s life.”

“Yeah,” says Lazarus, “life is what it is. Another glass of wine?”

I love these gospel stories, but even more I like to sit with Jesus and get the real goods, the story behind the story. And even more than that, like Lazarus I just love being with Jesus.

By now you’ll understand that I identify with Lazarus. If I’d lived in the first century, I don’t think I would have been up to actually following Jesus: traipsing around the countryside, sleeping rough, constantly with crowds, etc. Let’s face it: Not many people could stand this kind of life, even with Jesus.

But everyone—including me—can hang out with Jesus at home. And this, to my mind, is a better deal. Just as Jesus said to Martha, “Mary has chosen something better” (Luke 10:42), I believe He might have said the same of Lazarus. Why? Because Lazarus was even closer to Jesus than any of the disciples. The disciples were often on edge: What would the Master do next? What’s He getting us mixed up with? Where is all this going?

As for Lazarus, he felt so relaxed with Jesus, so completely himself, that he knew he didn’t have to do anything else except simply enjoy this man’s company, being with Him in a normal way. Lazarus knew the private Jesus, the side the public never saw, the plain man beneath all the hype, the man with cares and struggles of His own. That was the kind of friend Jesus needed.

This is what I see as my central calling: not to be a missionary, or a preacher, or even a devotional writer, but just to be a resting place for Jesus.

Read an account of my visit to the tomb of Lazarus.

Next Post:  The Cellular Waltz: Reflections on Sex from The Mystery of Marriage