During the fourth watch of the night Jesus went out to them, walking on the lake. –Mt 14:25

If we’re looking for places where Jesus walked, let’s not overlook the Sea of Galilee—not only because He frequented its shores but because He walked on the water itself.

If we need justification for including a lake in a book about rocks, consider that rocks abound on a lake’s shore and floor, and that lakewater is not entirely pure but contains small particles of stone—though not enough to support a man!

The most precious souvenir I brought back from Israel is not a stone, nor anything tangible, but an audio recording I made of waves lapping gently on a stony beach on the Sea of Galilee. I often play this recording here at home and let it take me back to what, for me, is the most profoundly peaceful place in the whole world. The presence of Jesus is palpable there, imbued in the sand, the grasses, the trees, the sky, the very light that shimmers over the water. After two thousand years it’s amazing how beautifully natural and unspoiled this lake still is, very much as Jesus would have known it. Other holy sites have been covered with elaborate churches or encrusted with the paraphernalia of tourism. But no church or monument can smother the Sea of Galilee; it’s too big and too natural—and supernatural. 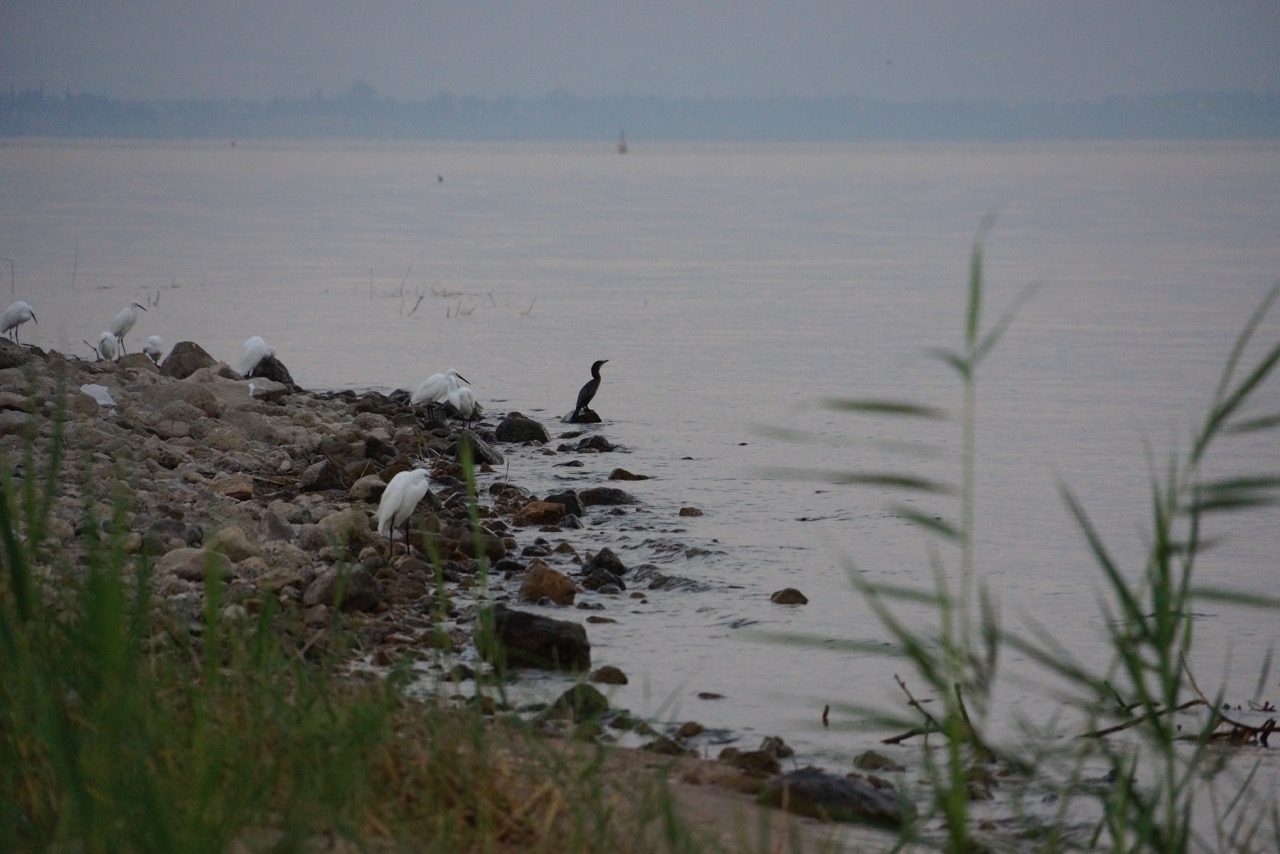 Cormorant and Herons on the Sea of Galilee

Yam Kinneret (or the Lake of Gennesaret, as Luke called it) is Israel’s primary source of water and, at 700 feet below sea level, the world’s lowest freshwater lake. About thirteen miles long and twelve miles wide, virtually the entire lake is visible from any point on its shores. Like most tourists, I took an excursion in a replica of a first century fishing boat. Gazing back at the shoreline, I found it astounding that so much of what we know of Jesus’ life took place along a seven-mile stretch of this coast, between Capernaum, where His early ministry was centered, and Tabgha, the site of His post-resurrection breakfast with the disciples. From the boat, the world of Jesus seemed so small.

The meaning of the name Kinneret is unknown, but as kinnor in Hebrew means harp, it may refer to the lake’s harp-like shape, or (my preference) to the music of its waters. Throughout the October week when I was there, it was so calm during the day that the water looked painted; only at evening did an almost imperceptible breeze raise wavelets. I found it hard to believe that this deeply placid scene could be visited by violent storms. But this is so, on account of the lake’s position in the Jordan Rift, surrounded by steep hills that funnel the fierce winds off the Golan Heights. According to a description by Georgette Corcos, “The Sea of Galilee is at times deep blue, placid, without a ripple, dotted with little sailing and fishing boats. At others the whole landscape has a dream-like character, the water is light green, almost white, and the mountains in the background seem to float in a soft mist. But this serene lake is also subject to sudden storms; in no time dark clouds gather, the whole lake is shaken by violent spasms and high, menacing waves put fishermen’s lives in danger.”

On the topic of rocks, in 2003 a monumental cone-shaped stone structure was discovered in the Sea of Galilee. Entirely underwater, this giant cairn of untooled basalt boulders is estimated to be over 4,000 years old. At 32 feet high and 230 feet in diameter, it’s higher than Stonehenge and covers twice the area. And other ancient megalithic structures have been found aboveground in the same region. Apparently, for a long, long time people have sensed the sacredness of this place.

Next Week:  The Wedding at Cana