Philip, like Andrew and Peter, was from the town of Bethsaida. –John 1:44

Note that the verse says “from” Bethsaida. When these men began to follow Jesus, they were living in Capernaum. But they had probably learned their trade in Bethsaida, another ancient fishing village on the Sea of Galilee. 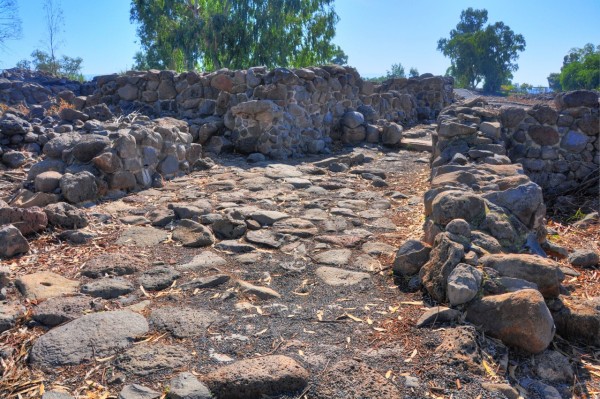 A street in ancient Bethsaida

Modern excavations have uncovered fishing gear and anchors in Bethsaida, as well as the street and houses shown in the photograph, a scene which the disciples surely knew. As archaeologist Nicolae Roddy puts it, “Andrew, Peter, and Phillip almost certainly walked on this street because they would have had to go out of their way to avoid it!”

Note the difference in quality between this village street and the splendid highway of Sepphoris depicted in a previous chapter. The rough Bethsaida stones were chosen and placed somewhat casually over a single layer of gravel. By contrast, the broad Sepphoris road was built up in the grand Roman style with many strata of rock, rubble, and gravel—whatever materials were available locally—layered carefully in a roadbed excavated down to bedrock (or at least to six feet—as deep as a modern grave!) and finally paved with shaped, fitted stones.

Other Roman roads that Jesus must have walked on have been uncovered in various places, including Tyre and Jerash (the latter being one of the cities of the Decapolis). However, a far better picture of daily life in a first century Jewish village is preserved at two sites not mentioned in the gospels, but which Jesus no doubt knew: Gamla, built on a ridge in the Golan Heights, and Jodefat, atop a knoll in Lower Galilee. The very fact that these places did not make it into scripture has kept them from being covered over with modern day churches or shrines.

The region of Bethsaida, on the northeast shoulder of the Sea of Galilee, was the site of at least three awesome miracles: walking on water (Mk 6:45); healing a blind man (Mk 8:22-6); and feeding the five thousand (Lk 9:10). A close study of the four accounts of this last miracle leaves its exact location in question. As we’ll see in the next chapter, tradition gives the nod to an entirely different location, Tabgha on the northwest shore, where stands the present day Church of the Loaves and Fishes. Why this discrepancy between scripture and tradition? No one knows, but due to persecutions and political interference in the first two centuries, the early Christians were prevented from making pilgrimages or building conspicuous shrines. Since the eastern and western shores of the lake had different jurisdictions, the Tabgha site may have offered easier access to pilgrims.

In any case, the New Testament places this miracle (and probably the feeding of the four thousand as well) near Bethsaida, not Tabgha. To this neighborhood Jesus retired by boat with His disciples for a period of rest. The multitude following on foot along the northern shore of the lake would have crossed the Jordan by the ford at its mouth, which is used by foot travelers to this day.

While Bethsaida was the scene of spectacular miracles, let’s not be too quick to celebrate this town. In fact, along with Korazin and Capernaum, it was one of the towns that Jesus condemned for its lack of faith: “Woe to you, Bethsaida! For if the miracles that were performed in you had been performed in Tyre and Sidon, they would have repented long ago” (Lk 10:13).