The Jews picked up stones to stone Him, but Jesus said to them, “I have shown you many great miracles from the Father. For which of these do you stone Me?” –John 31:2

The word stone, like rock, can be both a noun and a verb. The practice of stoning, or lapidation, as a method of execution was commanded by God in the Law of Moses for a range of crimes including blasphemy, idolotry, and adultery.

In one case a man was stoned to death for gathering wood on the sabbath day (Num 15:32-6). The Old Testament describes half a dozen instances of this penalty being exacted. Nor did the practice cease in New Testament times. Both Stephen and Paul were stoned (though Paul survived), and on two occasions Jesus Himself was nearly stoned. And then there is the famous incident in John 8 of the woman taken in adultery, where Jesus induced the accusing Pharisees to drop their stones and walk away.

So the practice of stoning was common. As Jesus lamented, “O Jerusalem, Jerusalem, you who kill the prophets and stone those sent to you…” (Lk 13:34). Probably Jesus saw people stoned to death, just as He would have seen crucifixions. How else could He have said that a disciple must “take up his cross and follow Me” (Mk 8:34), knowing His hearers could picture precisely what He meant (though doubtless its deeper meaning perplexed them)?

Like lynching in the Old West, capital punishment wasn’t necessarily reserved to the state but could be performed by the community. And they used what was closest to hand. This is precisely the genius of lapidation: Stones can be found and picked up readily by anyone; no one has to touch the victim; and no one person is identified as executioner but responsibility is borne by all. There are even laws and customs to further ensure shared culpability. Article 104 of the modern Penal Code of Iran states: “The size of the stone used in stoning shall not be too large to kill the convict by one or two throws and at the same time shall not be too small to be called a stone.”

In Israel you never have to go far to find a stone. To describe the wealth of King Solomon, we’re told he “made silver as common in Jerusalem as stones” (1 Ki 10:27). When the Israelites invaded Moab, not only did they destroy all its towns but “each man threw a stone on every good field until it was covered” (2 Ki 3:25). Many places in Israel look as if a conquering army has just passed. 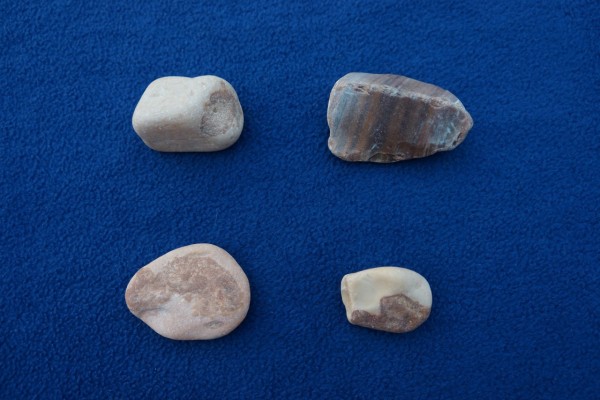 Stones from the Sea of Galilee

Throughout Israel I collected stones, as I do everywhere I go. One of my favorites is a white stone from the streambed in the Valley of Elah, where the boy David selected “five smooth stones” (1 Sam 17:40), one of which he slung into the forehead of Goliath. Could my stone be that very one? Probably not, since David’s stone “sank into Goliath’s forehead,” after which David cut off the giant’s head and “brought it to Jerusalem” (1 Sam 17:49, 54). David saved Goliath’s weapons, and I suspect he may have saved the fatal stone as well.

A friend suggested that while writing this book I should spend time with stones: touching them, studying them, listening, feeling their presence. I have done so, and the stones have spoken. These rough artifacts fresh from the hand of God have been for me at times more eloquent than the Pietà. I almost wish that this book might come with a small velvet sac of stones from the Sea of Galilee, which the reader might handle while reading so as not to lose touch with the reality of which I write.