I am Pharos, a being from Planet Luxor beyond the Light Horizon.

The present Horizon is 13.787 billion light years from Earth, beyond which the distance light would have to travel back through the expansion zone is increasing at the speed of light itself, such that the farthest galaxies are receding from Earth at a rate greater than light speed. (If this seems impossible, brush up on your Einstein.) Thus the realm beyond the Horizon provides a safe haven, undetectable from Earth, in which unfallen worlds may remain uncontaminated by the fallen universe. 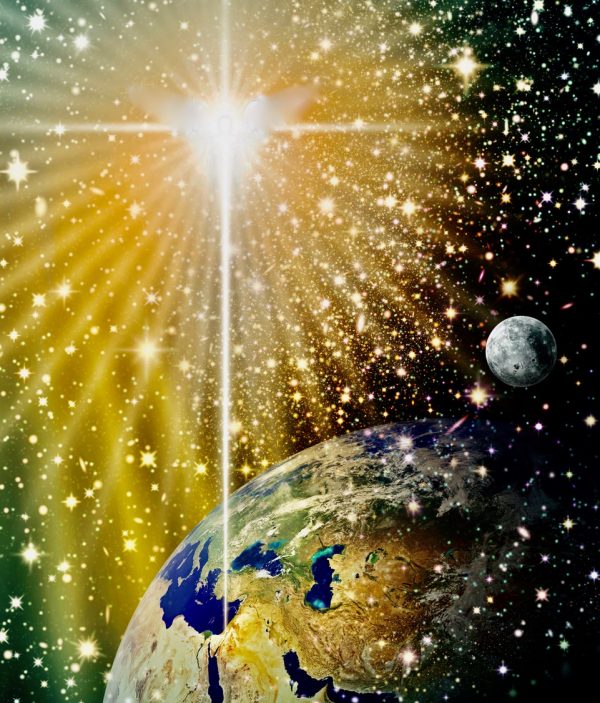 In Cosmic Year 13,786,997,988, His Majesty sent a directive to all the unfallen worlds that He wished to send a delegation from beyond the Light Horizon to Planet Earth. Twelve cosmonauts from all our worlds were selected for this mission. I, Pharos, was one of the twelve.

From the start it was an astonishing expedition. Earth, to say nothing of the entire fallen universe on the Other Side, had always been completely off limits to us. Indeed this planet, alone of all others, was concealed behind a Black Shroud, such that nothing was known about it. Of course we had legends and prophecies concerning the Dark Planet, one being that the Shroud concealed the place of the origin of evil. That His Majesty might choose this planet out of all others to receive a mission from beyond the Light Horizon—this was astounding. How were we to get near the Dark Planet? Was the Black Shroud about to be lifted?

Prior to my selection for this voyage, for some time I had had dreams about human beings, albeit without any sense of who these strange creatures might be. Indeed these reveries increased as the time approached for our departure, along with many apprehensions. No one from Luxor had ever crossed through the Light Horizon, nor would conceive of doing so. It would mean, we had always been told, certain death—a phenomenon unknown to us but intuitively comprehended. However, our mission was in obedience to a direct summons from on High, and a cohort of angels was dispatched to accompany us.

Our misgivings were calmed upon first entering the Horizon, which turned out to be intensely beautiful: a ravishing display of colors accompanied by exquisite sphere-music, as though flying through a symphonic sunset. Yet all too soon, ecstasy gave way to terror as our ship began violently shuddering as if ready to explode. Once through this phase, however, a profound tranquility settled over us. Having prepared for a protracted journey, we were surprised to find that our gravitron ship gained extra momentum from black holes, unknown beyond the Horizon, so that the flight to Earth seemed rapid and aged us only three years.

Upon arriving near the Dark Planet, we settled into a high orbit at Earth speed so as to maintain a geosynchronous position over the coordinates revealed by His Majesty. Apart from this, we knew nothing, being now enveloped in the Black Shroud. For three days we remained in limbo, cut off from all communication and unable to see anything of the world below.

And then—a miracle! All at once our accompanying angels took hold of the Shroud as if it were a piece of cloth and shook it until it dissolved into wispy fragments that vanished like smoke—and oh, what a sight then met our vision! The surface of the planet was still dark—it was night—yet the night was radiant with angels, ranks of Bright Ones standing solemnly in space, enabling us to distinguish hills, trees, buildings, and in the distance a river and a glowing sea—all features I recalled vividly from my dreams.

At a fresh word from His Majesty, we descended into the stratosphere to zero in on a more precise position. Suddenly we felt so exposed, hanging there clear as day in the night sky of an alien fallen planet. Being in charge of our onboard illumination, how I wished I could have extinguished our lights! But on Luxor we live on light, it is both air and food to us; and so I was constrained to blaze away.

With my acute vision I clearly discerned details of a small town below, nestled among low hills. The white stone of the buildings softly glowed; here and there a light burned, though not a creature stirred in the streets. Drawn to the outskirts, to a particular hill with a rocky outcrop, we were directed to focus on a certain cave—a small rounded enclosure with a large aperture. Within this space I plainly saw a pair of humans—my first actual glimpse of this race. How strange and strangely beautiful they were! To see such beings in dreams was one thing, but seeing them now in dazzling reality was—dare I say?—like seeing the face of Majesty Himself. And yet not like that at all, for despite such a beguiling appearance these beings seemed oddly weak and helpless; indeed they appeared to be in some considerable trouble.

Naturally we could not have comprehended what we saw were it not for the interpretive aid of Azaa, the angel who had joined us on our craft. At home on Luxor angels are as numerous as our own people, coming and going commonly, so in this there was nothing unusual. Azaa informed us that the two humans we beheld were a man and a woman, and the woman was about to give birth—a phenomenon unknown to us, as we are not born but created de novo, spontaneously. The woman lay on the floor of the cave, apparently in great anguish. A midwife had been summoned but did not arrive, and the man was just about to depart in search of help, when the cave filled with a supernatural stillness and light—the Glory!—and who should appear but …

The Most High! Yes—His Majesty Himself entered that cave and knelt in the straw to deliver His own Son into the dark world. It was, I thought, the holiest sight imaginable in any world, as the Lord of All placed His tiny Babe at the Virgin’s breast, while the Glory shone all around.

Did I recognize this Holy Child? Oh yes! From ages of prophecy we all knew immediately who this was: the One we call the Choragus, Son of Majesty, Prince of the Starfields, born this night in a human body of flesh in a cave near an obscure little town on the fallen Dark Planet. The Child’s face shone with a light never before seen in all the universe. For those of us who live on light, here was real food, real drink. Oh yes, we knew Him! Overjoyed, with the angels we sang: Highest glory to Majesty, and divine blessing to all of good will on Earth!

Shortly after this, the Holy Family moved into a rude house on the outskirts of town, where they received the visitation of some Magi from the east. Later they had to flee the country, at which point we too were called home, whereupon we joyously spread the word throughout the Starry Realms of all we had witnessed.

Many theories, I understand, have been proposed as to the nature of the wondrous guiding light that appeared in the heavens in Earth Year 6 BC. Was it a meteor? A comet? A planetary conjunction? A miraculous singularity?

Now you know the truth. And now you know from just how far the Magi came to worship the Choragus. The earthly kings brought Him gifts of gold and frankincense and myrrh.

I, Pharos of Luxor, brought the Star.

Next Post:  Romanos the Melodist: A Christmas Eve Story

Posted in Stories and Excerpts and tagged Christmas, Christmas Story.