It’s easy to forget that the wise men did not visit Jesus in the manger as a baby. No, according to the information they gave to King Herod, they must have found the Christ child some two years later living in a house on the outskirts of Bethlehem. This is important.

They knew they were looking for a child, not an infant, and this was a matter of some awkwardness for them. They wondered what sort of behavior would be appropriate in the presence of a child-king. They pictured themselves kneeling, presenting their gifts, and then perhaps sitting stiffly on the edge of wooden chairs and nibbling biscuits. Their conversation would be mainly with the parents, of course, while the child looked on serenely, wonderingly. With careful humility they would avoid His large, omniscient eyes.

This is not how things turned out. 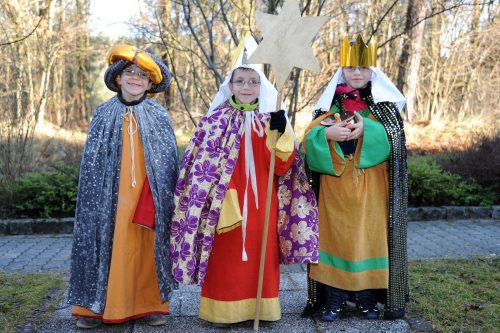 These men were bachelors, remember. Monkish types, apprenticed from birth to a serious pursuit. Contemplatives used to sitting on their duffs and reaching after the ineffable with their noggins.

What could they possibly know about the terrible twos?

How surprised the magi were to find their little king blazing around the house naked, chattering up a storm, and leaping onto their laps to tweak their beards! Even more surprising, they found they did not react to these improprieties with horror. Instead they felt all the stiffness draining out of them, lifetimes of reverent caution melting like marshmallows in hot chocolate. They were charmed, delighted, won. Truly and deeply.

In no time they found themselves regressing into the childhoods they had never had. They got down on their knees, alright, but it wasn’t to worship—it was to give the kid camel rides on their backs, and then to roll over like great fat bears while the boy who had made the universe used their bellies for trampolines. Yes, they fell down before their king, yet not in some formal act of prostration, but bowled over like ninepins by the thunder of a child’s chortle.

People who have had no childhoods are old at forty. They have lived their lives, they can see no way forward. There is nothing left for them but to go back, back where they have never been. This prospect is terribly frightening. Imagine being frightened of becoming a child! It’s like being afraid of ice cream.

But just so did things stand with the magi. Even the stars—which to the Boy King were like so many marbles, so many toy jewels—were to these men objects of utmost seriousness. Had they not given themselves to following a star, believing this to be the great high purpose of their lives? And where had it gotten them?

“You better believe I am!” said his laughing eyes. “Now you open wide your mouths, your ears, your hands, and your hearts, because I’m going to fill you up with beans too.”

Did the magi know beyond doubt that they had found their king? Oh yes, they knew! They knew it when the little guy sat astride their backs, smacked them on the rumps and cried, “Giddyup, Frankincense! Mush, Myrrh! Hi ho, Gold—away!”

But he was born to embarrass nice men. All day long the great sages lay in the dirt, collapsed in ecstasy, slain by the spirit of an urchin. And all night they lay there babbling in tongues, humming snatches of psalms and Mother Goose, burbling musically like babes. That night the greatest astrologers of the ancient world literally saw stars—saw them for the first time as they are, rolling ‘round heaven to a toddler’s tune.

These men who had come to pray, ended in play. They came to give gifts, but ended by leaving what they had long ached to be rid of: starched collars, tinsel crowns, jaded adult wisdom.

(An excerpt from Twenty-One Candles: Stories for Christmas)