I became a Christian in September, 1981, while reading Paul’s letter to the Galatians. At the time I didn’t understand much of it, but somehow I grasped that it was about truth and freedom and how these were to be found only in Christ. Paul’s words seemed to leap from the page like flames of fire, and stricken with conviction I fell to my knees and gave my heart to Jesus.

To this day the letter to the Galatians retains its power for me every time I read it. Recently it so stirred me that I wished I could write a letter back to Paul, thanking him and telling him my feelings. Then I thought: Why not? The New Testament epistles are simply letters which the apostles wrote to churches or to individuals. Why shouldn’t the recipients respond with letters of their own?

So here goes—the First Epistle of Mike Mason to Paul the Apostle (Second Epistle to follow in the next installment): 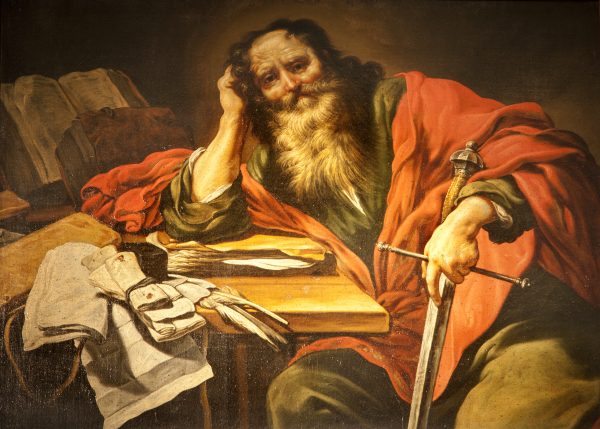 Imagine this: I’ve been a Christian for over thirty-five years and I’ve read your letter to the Galatians over and over, yet I’ve never before noticed this verse: God, who set me apart from birth and called me by His grace, was pleased to reveal His Son in me (1:15-16). What astonishes me here—as so often in your letters—is the light that suddenly streams from one surprising little word—in this case, the preposition in.

Why didn’t you write to? In your famous Damascus Road experience, didn’t Jesus Christ appear to you rather than in you? Yet as I ponder this verse, I wonder if the critical moment of your conversion actually came later, as you sat in the darkness of your temporary blindness and tried to make sense of what had happened on the Damascus Road. Was it then that the Son of God was revealed in you and you believed?

Ah! how great and precious is that light that shines in the dark secrecy of our own hearts! And how amazing that God Himself should come to live in us by His Spirit! Yet sadly, we can “ask Jesus into our hearts” and still relate to Him as if He’s outside somewhere, distant and unreachable.

Thanks to your little word in, Paul, I see afresh that the essence of spirituality is not a closer walk with God, not a drawing near to Him, but rather the realization that in Christ there is no more drawing near to do. It’s all been done already by the One who died for us so that He might live in us, and we’re already as close to Him as we can be. Indeed there is no more Him and me, but only Him in me, Him as expressed uniquely through your eternally grateful correspondent,

Next Post:  The Second Epistle of Mike Mason to Paul the Apostle