The wishes of a dying man are not to be taken lightly. So when my friend Mark, lying in his bed at Hospice, asked me to write something about him and his son Geoff, I gladly agreed. 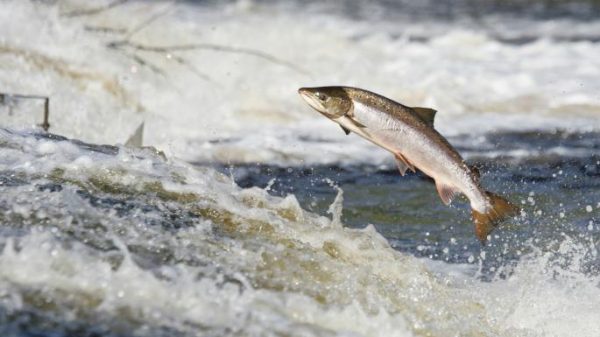 I need to preface this story with two other stories. First, Mark and his wife had been married for over fifty years, and every evening as they said goodnight to each other, they made a sweeping motion with one hand accompanied by the exclamation, “Whoooosh!” Years before, they had been overcome with wonder upon first seeing dozens of spawning salmon leaping up a high waterfall in the bright sunlight. The whole scene seemed to be flashing with silver. Ever since then, they ended each day by saying “Whoooosh!” as a way of acknowledging that every day—however difficult it may have been—had moments of magic, wonder, beauty, and grace.

What Mark saw in that display of leaping salmon is what he called “a flash of silver”—that is, a moment of grace. He came to believe that when those flashes happen, one needs to embrace them, even act on them. If you follow the flashes of silver in your life, they will always lead you to the truth.

One time a friend of Mark’s, a pastor, preached a sermon on grace in which he asked, “If beliefs were rationed, and you were allowed only three beliefs, what would those be?” His first one, he said, was that God was in Christ reconciling the world to Himself. His second one was grace, and his third one was grace. He believed in the reality of extravagant grace, but the recognizing and receiving of grace all hinged on the first belief.

Mark told me these two stories—the one about “Whoooosh!” and the sermon on grace—a few days before he died in Hospice. And then he told me a third story—one so important to him that he wanted me to promise to write it for him.

Despite many doubts and detours in his faith, Mark was a Christian. As for his son Geoff, Mark told me he was “following an even more circuitous path in life” than his father.

Shortly before Mark entered Hospice, he and Geoff had a significant visit. Geoff, a cyclist, was excited over a short video he’d seen about a high-end custom bicycle shop on Quadra Island in BC, called Naked Bicycles. (You can watch that video here.)

“Can I show it to you, Dad?” said Geoff, and so the two watched it together.

In the process of showing the owner at work in his shop constructing a bicycle by hand, the camera focused for a moment on one particular component, a small silver bracket. At that point, Mark noticed Geoff’s eyes light up, and he knew that Geoff needed to have one of those bikes. It was a flash of silver! Without a second thought, Mark offered to buy it for him.

Geoff, blown away, was hesitant to accept his father’s offer. “But Dad, those bikes are very expensive!”

“Doesn’t matter, Geoff. It would be more costly to live without it.”

In asking me to write this story, Mark was, in effect, delivering his final message to the world: Go to any lengths to acquire those things that set your heart alight—or to help others acquire them—because it’s more costly to live without them. (And of course, he was not meaning only material things.)

This story and its message reminds me of a poem by R.S. Thomas called “The Bright Field.” As you read and meditate on this sonnet, try asking yourself:

1) Have you seen or experienced a “bright field” lately?

2) How did you react? Did you forget it and walk away, or did you take it to heart?

3) How do you feel about selling everything in order to acquire the “flashes of silver” in your life?

I have seen the sun break through
to illuminate a small field
for a while, and gone my way
and forgotten it. But that was the pearl
of great price, the one field that had
treasure in it. I realize now
that I must give all that I have
to possess it. Life is not hurrying
on to a receding future, nor hankering after
an imagined past. It is the turning
aside like Moses to the miracle
of the lit bush, to a brightness
that seemed as transitory as your youth
once, but is the eternity that awaits you.

Next Post:  Ecstasy in Living: Finding Out What You Love