When the disciples landed, they saw a fire of burning coals there with fish on it, and some bread. –John 21:9

The resurrection body of Jesus had an utterly new relationship with the material universe, walking through walls and defying gravity by lifting off from earth like a gentle rocket. Nevertheless He still honored the old order by squatting on a rock to cook breakfast for His disciples. 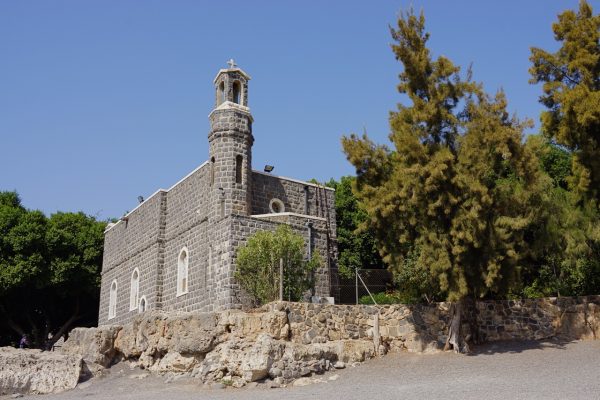 The Primacy of Peter

The place where this famous event occurred is a beach at Tabgha on the northwest shore of the Sea of Galilee, now marked by a church called The Primacy of Peter. This Franciscan chapel was built in 1933, but the foundations of a previous fourth-century church are still visible at the base of one wall. At this site, for the second time in their lives, Peter and his buddies fished all night without catching anything, only to be told by Jesus, “Throw your net on the right side of the boat and you will find some” (Jn 21:6). Recognizing the Lord, Peter jumped into the water and swam (not walked) to Him, whereupon the others followed in the boat to discover a breakfast of toast and roasted fish already prepared.

Meals were important to Jesus, this man who had fasted for forty days. In the gospels a great deal happens around the table: the wedding supper at Cana, dinner at Matthew’s house, dinner with Simon the Pharisee, dinner with Mary and Martha, and so on. And of course there was the Last Supper.

But now we come to the Last Breakfast. Two other times we’ve seen the risen Jesus eating with His disciples: once when He broke bread with two of them at Emmaus (Lk 24:30), and again when He was given “a piece of broiled fish, and He took it and ate it in their presence” (Lk 24:42). But this breakfast on the beach at Tabgha is remarkable for its naturalness, its domesticity—just what the tramautized disciples would have needed to restore a semblance of normalcy.

As usual with Jesus, things didn’t remain ordinary for long. As at the Last Supper, where He both served food and washed feet, here again we see Him serving the disciples. And again He turns the tables by exhorting them to follow His example and serve others. Speaking to Peter, but really to all of them—and to all of us—He says three times, in three different ways, “Feed My sheep” (Jn 21:15-17).

Those three little words are what compel me to write books. Over and over I hear this invitation, this challenge. When Christ returns I want to be found a “faithful and wise servant” who is busy giving others “their food at the proper time” (Mt 24:45).

Because Jesus cooked over “a charcoal fire” (Jn 21:9 ESV), a thousand years ago this rocky beach was known as the Place of the Coals. This homely detail may call to mind one other incident in the gospel accounts. When Peter was in the midst of denying His Lord three times, he was “standing and warming himself [at] a charcoal fire” (Jn 18:18 ESV). Seeing this fire on the beach at Tabgha, and hearing Jesus ask him three times, “Do you love Me?” must have swamped Peter with bitter remembrance. But he might also have been reminded, here in this rocky place, that Christ had given him a new name which means rock, and had installed him as chief of the apostles and head of His church. Hence the name of this site: The Primacy of Peter.

(an excerpt from Jesus: His Story In Stone)

Next Post:  Come to the Banquet! Eat the Bread of the Presence!