The first thing I do at the start of a new year is to clear off my desk—not just to find places for all the physical odds and ends that have accumulated, but to organize my ideas, sorting through the various notebooks and scraps of paper where I’ve jotted down thoughts that came to me on the fly.

Many of these go into files for the half dozen or so books that I’m planning to write. But there are always some stray thoughts—ideas that strike me as being very interesting, but which I cannot figure out how to classify or where to file. And so I’ve decided to file them here in a New Year’s gallimaufry (which, by the way, is a hodgepodge or medley). 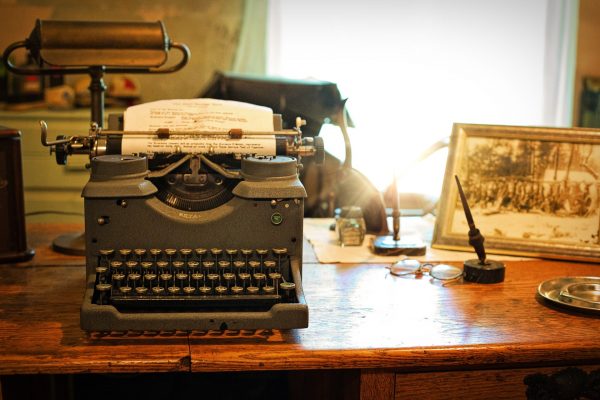 To possess the gospel is to be on fire with one perfect idea.

To love, I must give up everything else—absolutely everything—except love. Love is a commitment to eliminate everything that is not love.

Marriage is a long exercise in one-downmanship.

As Christians there are only two ways we can look: toward the darkness of our own and the world’s sins, or toward the light of God’s grace and forgiveness in Christ. Since we cannot look both ways at once, it behooves us to face fully toward the light, and let the dark fall away, not just for our own sake, but because only thus are we moved to lavish upon God all the praise He deserves.

Always at Christmas I recall a wonderful story my friend Murray used to tell at his annual Carol Sing. At a Christmas Eve service he attended as a child, it seems the choir, in typically regal fashion, was processing down the center aisle which happened to feature a heating vent in the floor, one of those old fashioned wrought iron grates with an intricate design. One of the choir women wore high heels, one of which got stuck in the grating. She carried on as though nothing had happened, leaving her shoe behind, but the following woman stooped down in passing and with one graceful motion retrieved the abandoned shoe. The only trouble was that the grating came up with it, leaving a gaping hole into which the next woman tumbled, causing the one behind her to topple on top of her, and so on in a general tumult such as could not have been more beautifully orchestrated by a vaudeville team. Thankfully, no one was hurt.

To come to Christ is to experience your own creation. Angels, who were not born but were created whole spontaneously, were conscious at their creation. But we humans were unconscious, having no memory of this great event. It might even be argued that we remained unconscious (relatively speaking) until the moment we emerged from darkness into light and were born again in Christ. From that point on (if all goes well!) we remain wide awake, not only conscious of how God is making us into new creatures, but participating in our own creation.

People Jesus Did Not Heal:
1) Most Gentiles: the Syrophoenician woman (Mark 7) and the centurion’s servant (Luke 7) stand out as exceptions.
2) Many people in His hometown, where “He did not do many miracles because of their lack of faith” (Matt 13:58).
3) All the sick people He passed in His travels without stopping. Blind Bartimaeus (Mark 10) and the woman with a chronic hemorrhage (Luke 8) stand out as exceptions.
4) All the Scribes, Pharisees, and Saducees.
5) The “great number of disabled people—blind, lame, paralyzed”—who used to gather at the Pool of Bethesda (John 5:3). Of this crowd, Jesus healed only one invalid.
6) Almost everyone else in Jerusalem. The man born blind and the invalid at the pool are the sole exceptions.
7) The lame man on the Temple steps, whom Jesus would often have passed but who was finally healed by Peter and John (Acts 3).
8) Lazarus was left in the tomb for three days before Jesus raised him.
9) Etc.

At a smorgasbord there are often dishes you wish you could partake of, but there just isn’t room on your plate—not to mention in your stomach—for everything. In eternity this will not be a problem. Eternal life is a feast where you can keep going back to the table over and over, filling up your plate again and again without limit with the most delectable delicacies.

A group of Anglican bishops once came together for a conference in England. In the midst of a worship service one of the bishops, dressed to the nines in his ecclesiastical robes, was filled with an urge to dance, and he began drifting and floating around the sanctuary in a most unbishop-like fashion. Then another bishop joined him, and another, until soon the whole lot of them were fluttering about like a cloud of autumn leaves blown by the wind. And wind it was, too: the wind of the Holy Spirit. Hearing this story, I suddenly realized what all those gorgeous ecclesiastical robes are really for: dancing! Those rich fabrics and long, full skirts are made to flow. There’s nothing like dancing for breaking the hold of stodgy, churchy legalism. That’s why hypocrites hate it so. Many churches would do well to forget sermons and prayers for a while, roll up their carpets, and spend a few Sunday mornings just shaking out their sillies. Singing is very good for the lungs, but what about the rest of our bodies? Or is it only our tongues that are allowed to have fun?

Like the word ‘saved’, the term ‘Christian’ may have outlived its usefulness. Telling someone you are a Christian—to say nothing of an ‘evangelical’ or ‘born again’—can be a good conversation-stopper. I like coming up with new names to describe who I am. A name should be catchy and intriguing. ‘Christ-one’ is not bad: it preserves some of the flavor of the original term, but with a twist. Or how about ‘Christiam’? By changing one letter I combine two of God’s names—Christ + I am—and at the same time I proclaim the heart of “the mystery kept hidden for ages … which is Christ in you” (Col. 1:26-7). Carrying this word-play a little further, if you and I are ‘Christiams’ (or Christ-chums?) then our religion could be termed ‘Christiamity’. Now we’re getting somewhere! Here is a word that carries the clear implication that ‘amity’, or friendship, is what we are all about. Better still, why not be like the Quakers and just call ourselves ‘Friends’?