Do you remember when the universal convention was to leave two spaces after a period rather than just one? If you do, then you’re probably as old as I am (70), or older. How did the change to one space come about? Who ever made this monumental decision? 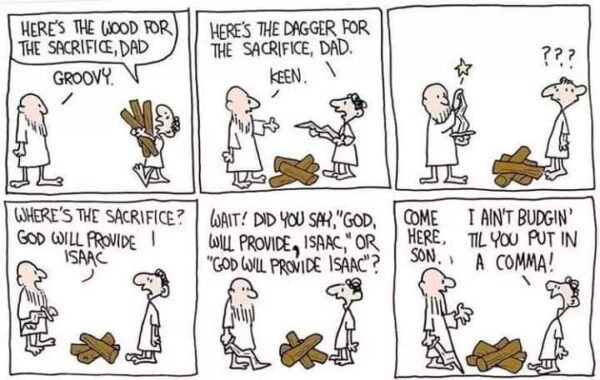 Well, there’s a long story behind that, which I won’t go into here. For now, I wish only to suggest that this apparently simple yet revolutionary change says a great deal about our lives in the twenty-first century. Of course, it is a commonplace to observe that technology and other factors have greatly speeded up our pace of life. The elimination of one space after a period may seem like a small matter, but add up all those spaces and it amounts to a lot of lost opportunity for resting our eyes and souls. How much? In a 500 page book, the loss of that one extra space amounts to a loss of about 60 blank pages. In short, as our pages of text grow more crowded, so do our lives. Is this not representative of what we’ve done in a larger sense: eliminating spaces to think, reflect, rest?

I began to wonder what other changes in punctuation usage may have to say about our society. Take the period, for example. In online texting or chatting, final punctuation is often omitted, so that to end a sentence with a period may actually look abrupt or aggressive. And since aggression these days is rampant, how convenient to be able to express it so subtly, with the addition of just a few pixels.

Or consider the exclamation mark. Have we not all become gross over-users of this exceptional typographical sign? Almost any email we receive will have a smattering of them, often generous. If you’re like me, you try to employ them sparingly, but they have a way of getting out of hand. Often I have to go over an email I’ve composed and deliberately remove two or three exclamation points, lest I appear too enthusiastic.

What is going on here? Is it not that our lives (especially during Covid) have grown so flat, boring, and colorless that we must artificially introduce some zing and zest? Exclamation to the rescue!!! I, for one, feel it’s time to place some restraint on this extravagance. Just as children’s computers may be fitted with parental controls, I propose installing a meter on the exclamation key, so that it can only be punched, say, half a dozen times a day.

Now we come to commas. As for the Oxford comma, don’t get me started on that. But is it necessary to observe that hardly anyone has any idea of the proper use of the comma, period? These days it’s most commonly employed not to punctuate a sentence but to represent a wink.

Another punctuation mark that comes in for extreme abuse is the dash. People today use dashes in all sorts of ways except the correct way. Again, one can only suppose that this is because, living in the fast lane, we are always dashing about.

And what to say about colons and semi-colons? Just one word: extinct. In this age of global extinctions, colons and semi-colons have joined the passenger pigeon and the ivory-billed woodpecker. Why? Simply because their proper use requires a certain degree of literacy. So who needs them? Why break up a perfectly good sentence (or more likely, a bad one) with an eyesore of extraneous dots? Are we writing Braille? Enough said.

Now here’s an interesting subject: the ellipsis (dot dot dot). In normal literary use the ellipsis stands for an omitted section of text. But in emails, or especially texting, by asking the recipient to fill in the blanks the ellipsis introduces a note of uncertainty: Well, this is awkward … How post-modern! Not knowing what to say, we pass the buck, leave everything open-ended. What’s more, the ellipsis can have a highly suggestive connotation as coy, flirtatious, even offensive. A friend of mine was scandalized by his father who was using ellipses in his texts without any awareness of these new implications.

It seems to me that the only punctuation mark that has not substantially changed usage in the past few years is the question mark. And why should it change? Huh? In this age of deconstruction we have more questions than ever, and this curly little inquisitive squiggle perfectly serves the purpose.

Finally, a word about that brand new form of punctuation—emojis. This subject hardly needs comment, as it is so patently obvious that, no longer able to express ourselves well verbally, en masse we are reverting to pictograms. Soon all the subtle possibilities of language will be lost to us and we’ll be back to scraping marks on cave walls. The alphabet will be a thing of the past, and all our communication will assume the form of punctuation.

In short, we’ll have nothing at all to say.

Next Post:  Wake Up Into My Love: How the Pain of Becoming a Father Unlocked the Grace of Being a Son