Inside the Primacy of Peter, in the apse before the altar, is a rock reputed to be the one on which the risen Jesus served breakfast to His disciples. 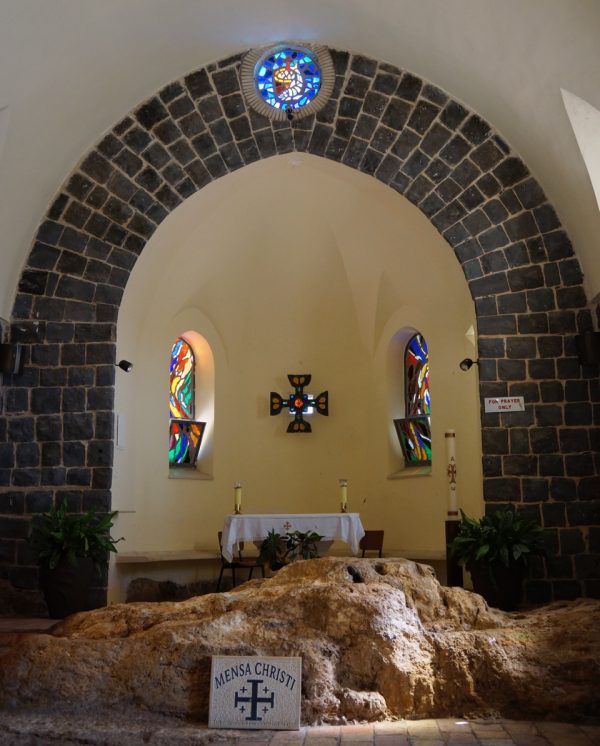 Known by its Latin name, Mensa Christi, the Table of Christ is  not a freestanding rock but is part of an outcropping that extends outside the church onto the beach. Here Jesus would have placed the fish and the bread He had just cooked over an open fire. The fire itself would have been built on the rock, which by retaining heat would have formed a lovely hibachi.

Both the Last Breakfast and the Last Supper are marked by a disarming intimacy. But the latter, besides being much more somber, was a formal occasion as Jesus introduced a new liturgy into the old liturgy of Passover. The Last Breakfast is just the opposite: a relaxed, spontaneous gathering in a purely natural setting. This informality is all the more remarkable given that Jesus now appears in His resurrected form. How liberating this is—implying that the closer we come to heaven, the more free and easy we can be. Just the fact that this breakfast happens outdoors, rather than in a stuffy upper room, gives it a different ambience. The disciples must have been reminded of countless such open-air meals they had shared while traveling with the Jesus Road Show.

A further contrast: While supper happens toward the close of day, breakfast comes at the beginning. In several ways in this scene Jesus sends a clear message that a new day has dawned: He reinstates Peter; He repeats a sign (the miraculous catch of fish) from the early days of His ministry; and He appears first thing in the morning, just as He did the week before on Easter Sunday. (I suspect this breakfast also happened on the first day of the week, but a week later.)

Next door to The Primacy of Peter is the Church of the Multiplication of Loaves and Fishes, rendering Tabgha a place well-remembered for the eating of bread and fish. Indeed perhaps it’s no accident that these two events are deemed to have happened in the same place. In an earlier chapter on Tabgha I questioned, in view of biblical evidence, whether this really is the authentic site of the miracle of multiplication. But there may have been another reason for locating this miracle beside the Mensa Christi, as the two events are profoundly similar. At the Table of Christ the disciples are not only fed but are commissioned and equipped to feed others, just as at the multiplication, when they come to Him anxious about how to feed the multitude, Jesus challenges, “You give them something to eat” (Mk 6:37). Even the sacred stones in these two churches, being outcroppings of the same bedrock, are much the same: tables of rough limestone reminiscent of the Old Testament commandment to build altars of undressed stone: “If you make an altar of stones for Me, do not build it with dressed stones, for you will defile it if you use a tool on it” (Dt 20:25).

Ancient cooking pots have been found at Tabgha, hinting that the early Christians may have periodically revisited this place to observe a continuing celebration of the Last Breakfast. As with the Last Supper, it may even have inspired a liturgy. It’s not hard to picture believers returning for generations to a site that held such strong associations with their Lord and His apostles, and where Jesus created one of the most beautiful stories in the Bible.