Everyone who hears these words of Mine and does not put them into practice is like a foolish man who built his house on sand. -Mt 7:26

Jesus referred to sand only once, in the parable of two men who built houses, one on rock, the other on sand. Although sand is composed largely of rock, in this parable it comes to symbolize the opposite.

Where rock stands for solidity and permanence, sand does not stand at all but epitomizes ephemerality. Sand is time running through our fingers. Yet this very world of shifting impermanence is what Jesus was born to be a part of. He enters our house built on sand in order to invite us to build on rock. In the words of the old hymn, “On Christ the solid rock I stand, / All other ground is sinking sand.”

It’s wonderful to think of discovering the stones of a first-century road that Jesus probably walked on. But He also walked where there were no roads. He was always walking, always on the move, always getting His feet dirty. And everywhere He went there was sand. Sand represents, if you will, all the footsteps of Jesus that have disappeared, that the wind has blown away. Fossilized footprints exist from the time when human beings first stood upright, but are any of the footsteps of Jesus preserved in stone? Yet what distances He must have covered, back and forth and up and down the holy land many, many times!

Arthur Blessit, who carried a cross on his back over 40,000 miles through 321 countries (a trek the Guiness Book of Records lists as the longest walk in the world), estimates conservatively that Jesus walked 21,525 miles in His lifetime—nearly the distance around the earth at the equator. I’m reminded of Henry David Thoreau who said, “I have traveled extensively in Concord.”

We’re used to the idea of every snowflake being different. But it might come as a surprise to learn that this marvelous uniqueness also applies to sand grains, a fact dramatically demonstrated by the microphotography of Gary Greenberg. Through his invention of a specialized high-definition 3-D microscope, Greenberg has been able to see and photograph sand grains as they have never been seen before. He discovered that sand, far from being a collection of tiny beige chips of stone, is a treasure chest of exotic jewels, each grain as different from its neighbors as one face is from another. Indeed every beach has its own distinct character—“a signature, so to speak, written in the sand.” (Dr. Gary Greenberg, A Grain of Sand: Nature’s Secret Wonder.) 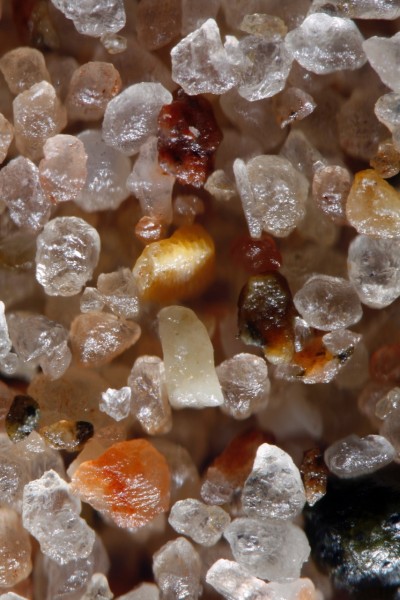 Astronomer Carl Sagen famously observed that there are more stars in the universe than grains of sand on all the beaches of earth. He was right, and by quite a large margin: about 52,000 billion billion stars versus only 4,800 billion billion grains of beach sand. But what if we were to add the sand in all the world’s deserts, rivers, and other sandy places, including underground? Wouldn’t it be interesting if the totals of stars and sand grains turned out to be exactly even?

This question is not unrelated to biblical theology. In Genesis 22:17 the Lord says to Abraham, “I will surely bless you and make your descendants as numerous as the stars in the sky and as the sand on the seashore.” How numerous? Obviously this is a definite, though unknown, figure. Precise numbers do seem to be important to God: Consider Ezekiel’s meticulous measurements of the New Temple; Daniel’s 1,335 days; Revelation’s 144,000 redeemed; etc. “Indeed,” says Jesus, “the very hairs of your head are all numbered” (Lk 12:7).