When the time of their purification according to the Law of Moses had been completed, Joseph and Mary took Jesus to Jerusalem to present Him to the Lord. (Luke 2:22)

Six weeks after Jesus’ birth, Joseph and Mary walked the six miles from Bethlehem to Jerusalem for the ceremony of Presentation. Pictured in the photograph are the very steps they would have ascended with their newborn son in order to enter the Temple. Later, as a twelve-year boy and then as a man, Jesus would ascend these same steps under His own strength.

This broad staircase, 215 feet wide and composed of thirty shallow treads cut into the bedrock of Mount Moriah, led up the slope from a large public square with a market and a main street, portions of which are still extant. Here pilgrims would have gathered before going up to the Temple through the two main entrance gates, the arch of one of which is partly visible just left of center. 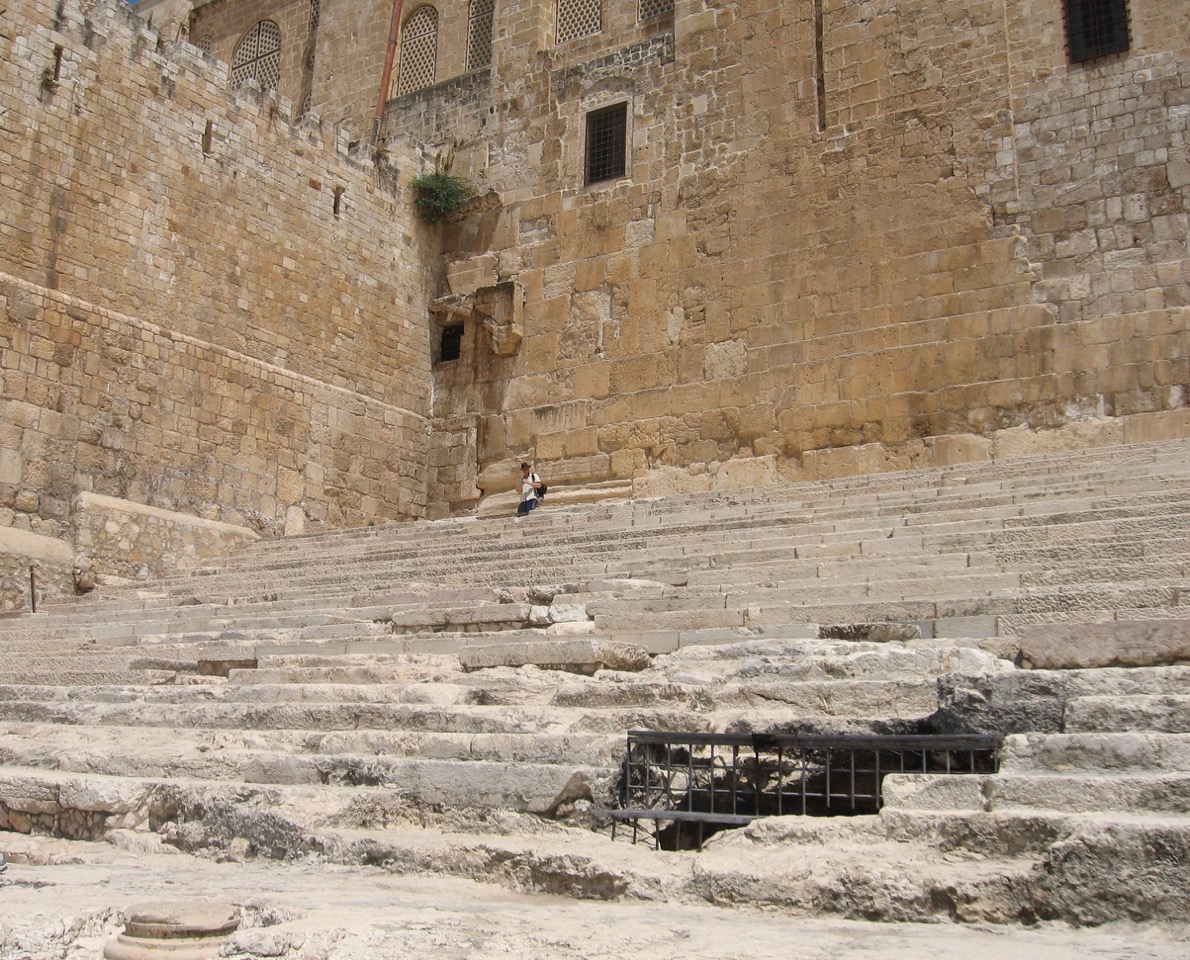 Southern Steps of the Temple

These steps were discovered by archeologists digging along the southern retaining wall of the Temple Mount, where no other buildings had been erected since the first century. Some of the slabs forming the steps were missing, and others had been smashed, but many are still intact and visitors can walk on them today. Newer stones have replaced the damaged or missing ones, but the originals are easily identifiable by chips and cracks. Curiously, the steps are not of uniform width but alternate between narrow treads of twelve inches and broad ones of thirty-five. The reason for this is unknown, but perhaps it was intended to slow the pace of worshippers to that of a processional, even to make their ascent to the temple somewhat awkward to emphasize that they were entering the presence of God. Or did the broad steps represent the greatness of God and the narrow steps the smallness of His creatures? Or did they reflect the unevenness of the spiritual walk, not pregressing smoothly but sometimes haltingly, other times with greater strides?

In any case, as worshipers mounted the stone steps they could feel in the soles of their feet that they were connected to bedrock—to something real, solid, permanent. And they knew they were going up. One always goes up to Jerusalem, never down or even simply to; its elevation is nearly 2500 feet. And once arrived in the city one had to climb even further to the temple. As the parable of the Pharisee and the publican begins, “Two men went up to the temple to pray” (Lk 18:10).

Judaism is an intensely sensual religion: “Taste and see that the Lord is good” (Ps 34:8). Throughout the Old Testament the involvement of God in human affairs, far from being purely spiritual, assumes dramatic physical manifestations, from the parting of the Red Sea, to the fighting of battles, to the detailed instructions for building the temple itself. To worship the Lord fully it was necessary to travel physically to this place, physically to climb the mountain of the Lord, and physically to participate in the temple ceremonies. This ancient stone stairway gives a sense of the physical effort involved in meeting with God. The whole atmosphere of the temple—the massive stones, the immense scale, the incense, the costly furnishings and ornamentation, the animal sacrifices—provided the worshiper with a sensually immersive experience.

This intense physicality of the Jewish faith has its climax in the incarnation of Christ. With Jesus, religion became not only more spiritual but more profoundly corporeal, tangible, earthy. How significant that the central act of Christian worship is a ceremony involving the physical elements of bread and wine—moreover, bread and wine mystically transformed into a higher form of matter, the resurrected body of Christ.